Update: Martin Luther: “We are at fault in not slaying the Jews.” The Holy See: “Let’s celebrate his life!” J’accuse! 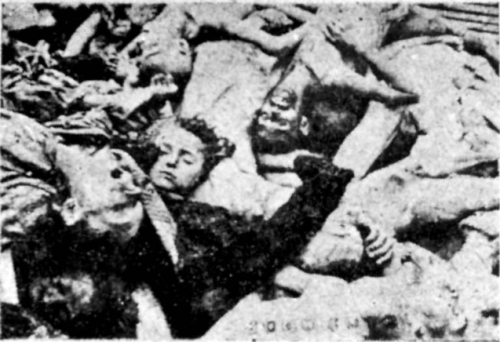 “Our lives begin to end the day we become silent about things that matter.” mlkjr

Being Pope Francis’ Jewish Missionary of Mercy, and invited to speak with parrhesia by him, I think I am obliged to offer some comments about the push among some curial officials to celebrate the life of Martin Luther and the Reformation, the former being inextricably intertwined with the latter. Cardinal Koch has said some good things in the past, so this is an occasion of real dismay for me particularly, and for all men of good will.

Martin Luther defined himself and his Lutherans as those who are to be condemned if they would not murder Jews: “We are at fault in not slaying them” (Luther, Martin. On the Jews and Their Lies, cited in Michael, Robert. “Luther, Luther Scholars, and the Jews,” Encounter 46 (Autumn 1985) No. 4:343–344). Like so much else with Luther, this is reminiscent of Islam, the old spread by the sword your faith kind of thing. This is the Reformation in all of its pristine vigor. It is Martin Luther’s “insight,” his “spiritual experience,” his Promethian understanding of “righteousness” and “mercy.” The response both of Lutherans and the Holy See to all this is:

“The ecumenical journey enables Lutherans and Catholics to appreciate
together Martin Luther’s insight into and spiritual experience of the gospel
of the righteousness of God, which is also God’s mercy.” 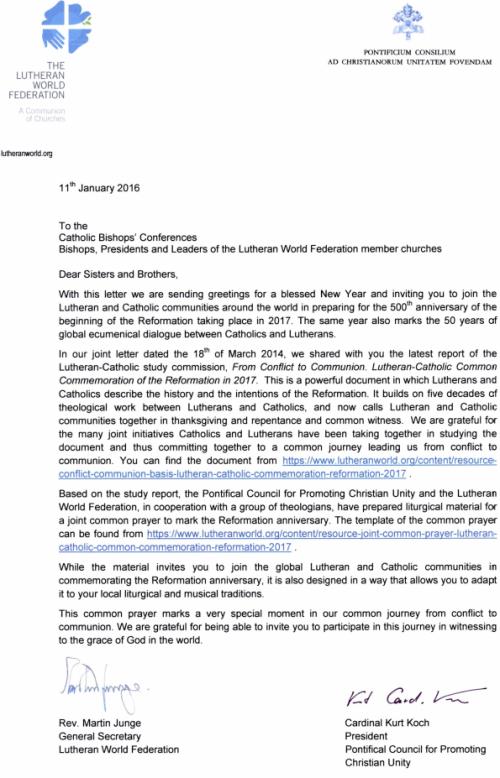 Of course, one might find this incredible. So, one finds it in the prayer text: Common Prayer – From Conflict to Communion: Lutheran–Catholic Common Commemoration of the Reformation in 2017. The text is “by the Liturgical Task Force of the Lutheran-Roman Catholic Commission on Unity.”

But, surely that’s cherry picking. Surely such anti-Semitism is rejected in toto elsewhere and without excuses being made. Lets take a look at the foundational document: From Conflict to Communion – Lutheran-Catholic Common Commemoration of the Reformation in 2017 – Report of the Lutheran-Roman Catholic Commission on Unity. This is by The Lutheran World Federation (LWF) and The Pontifical Council for Promoting Christian Unity (PCPCU), with Karlheinz Diez, Auxiliary Bishop of Fulda (on behalf of the Catholic co-chair), and Eero Huovinen, Bishop Emeritus of Helsinki (Lutheran co-chair).

229. On this occasion, Lutherans will also remember the vicious and degrading statements that Martin Luther made against the Jews. They are ashamed of them and deeply deplore them.

Really? I’m sure that cannot be correct. After a chapter break and a nice paragraph, the excuses for Martin Luther’s murderous behavior and statements against the Jews are effusive. But, let’s take a look at that nice paragraph in between just to make sure we don’t miss anything: 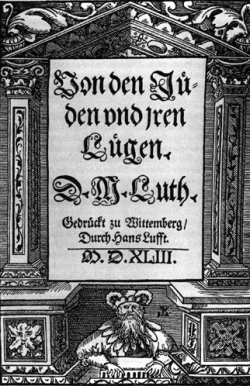 Of course, not being upfront about things about such division is opposed to the will of God, right? So, now, let’s see how such regret for Luther’s beastly raging against the Jews is simply dismissed, or perhaps, even praised if one would, you know, just kind of, like, understand the pressures of the times under which he was living, poor fellow and hero that he was. They are mean and cruel people, are they not, who would think that Martin Luther is responsible in some way for the Shoah, the Holocaust? 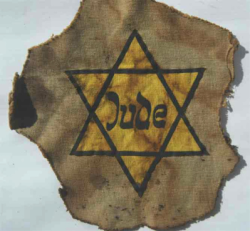 “Complex.” Sigh….. I apologize for using Martin Luther’s own rough language, but this is bullshit. Ideas have effects, and he meant every word of what he said, putting it into action (see also the list at the end of this article). This heap of excuses is dung with a blanket of glistening snow over it. That is the analogy which, in fact Martin Luther used for the ineffectiveness of Christ’s grace in sanctifying our souls, so that, for him, we remain a heap of dung with a blanket of snow over us. I reject this documents list of excuses for Martin Luther’s dung heap of anti-Semitic views and actions as being simply ineffective for justifying and sanctifying Martin Luther’s murderous anti-Semitic views and actions. Do I say this just because I am a Jew? No. All men of good will are offended. It is an offense against Jesus. I will not celebrate Martin Luther or his damned Reformation. And, to use the irony which so many cannot understand, I nevertheless say: Hier stehe ich. Ich kann nicht anders. Gott helfe mir: I side with those who are on the darkest of existential peripheries; I side with mercy. What this crowd is doing with all their excuses is promoting genocide all over again against the same people. J’accuse! (worth the read; this is a well used phrase also today). After all, we are under pressure today too, so we have an excuse to murder all the Jews Hitler didn’t kill, right? That’s the logic. To hell with that logic. It’s an all too easy absolution of Martin Luther’s role in violent persecution of the Jews in his own day and ours: Hey! He was just a man of his times! It is a virtue to be a man of one’s times, right? Again, since we are all under pressure for whatever reason, we all have an easy excuse and even praise for continuing to slaughter the Jews, right?

If you want an ever so brief rundown of all this, see Martin Luther and Anti-Semitism and his book, On the Jews and Their Lies. Just so as to offer a taste for timid clickers, I include a bit taken from “Luther, Martin”, JewishEncyclopedia.com; cf. Luther’s Works, American Edition, 55 vols., (St. Louis and Philadelphia: Concordia Publishing House and Fortress Press, 1955–86) 47:267:

“What shall we Christians do with this rejected and condemned people, the Jews?”

If publishing such things means I cannot be a Missionary of Mercy, then so be it. But I trust that Pope Francis meant what he said when going way out of his way to invite me to speak with parrhesia. This ever so nice kind of celebration of Martin Luther and his Reformation is precisely how genocides are brought about. It has to stop, and it has to stop now. Do we so easily forget the Divine Son of the Immaculate Conception? Do not fool yourselves with all your self-congratulatory “consensus building”. The Word Incarnate will judge the living and the dead and the world by fire.

UPDATE: A trusted friend, a one-time official in the Holy See, emailed me about this article, mentioning the analogy to be made with anything you like for such an abuse of power that rationalizes anything and everything, even genocide, with a statement about whoever being “a man of his times.” So, for instance, bishop or archbishop or cardinal whoever is to be excused and perhaps even praised for being so astute as a man of his times, who would, for instance, move sexual abusers from parish to parish, or to excuse embezzlement, or insurance fraud, or the making of Mass into a satirical parody. On and on. Is this what we want? No free will? Circumstances which determine our every action so that we are men of our times, the redemption and grace of our Lord to be damned? Is that what we really want? More importantly, is that what our Heavenly Father wants?

“God loved the world so much that he gave His only Son, so that everyone who believes in Him will not perish but have eternal life.”

You would think, these days, that people want to rewrite that:

God did not love the world at all, and did not give us His only Son, since He didn’t want anyone to believe in Him, but wanted them to perish and go to hell.

That’s not what I want. You don’t have me in your nice consensus. 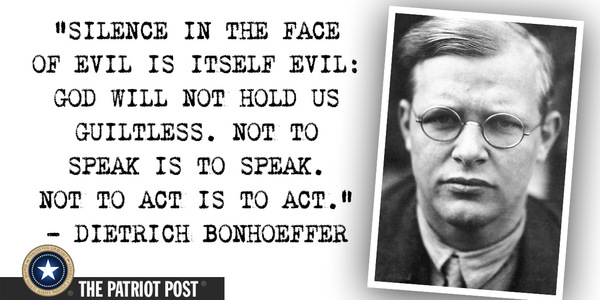 2 responses to “Update: Martin Luther: “We are at fault in not slaying the Jews.” The Holy See: “Let’s celebrate his life!” J’accuse!”