Update: Some guy teaching cryptology, I suppose, at both Amirkabir University of Technology and Islamic Azad University Shoustar Branch, seems to be making some strides in figuring out Part IV, taking hints from this very article. That’s Kryptic evangelization, an apocalypse. ;¬)

Hey, I mean, two pieces of petrified wood looking ever so much like a cross, with the rock looking as if it had been quarried from Calvary and the Holy Sepulcher. If the severed palimpsest palimpsest codex folios were closed, they would all come together, right? 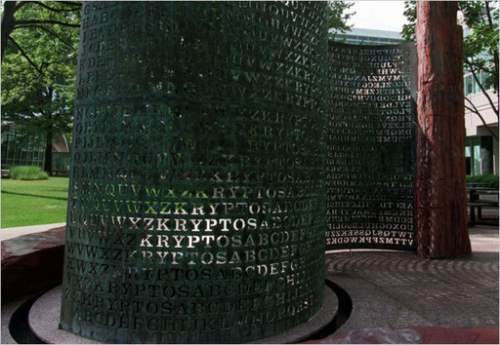 Look. Do the math for the Coriolis effect, the lifelong passion of the artist. Do you see anything in these pictures at all which might remind you of that, do you, I ask? Take away normal gravity, the folios close. Now, where is the upright stake of the cross? Over the water? Yes? Has no one ever seen such a most popular image?

Stat crux dum volitur orbis, right? If you can’t figure out part 4, it’s because you are looking in all the wrong places. I mean, is it dark in there, where you are looking? Can you see anything now? No? The center cannot hold if you are not at the center with the cross. Look again in all your treasure hunting, this time, in yourself, something you can’t do if you are away from Him who is at the center, because, on your own, you have no standard of comparison. Take away the gravity. Let the pieces come together. Don’t think you can control things, figure out things outside yourself just because you analyze them to death. We’re all human beings. Look for other clues, first of all in yourself but, with debris out of the way, with real agility of soul coming from outside of you. If you’re impossibly not humble, read John 9:41. We’re all in the same boat, wherever we are, whoever we are, whenever we are, in whatever circumstances we’ve grown up in right around the world. If you find the worst of the worst in yourself, you’ll find what you are looking for as a service to all mankind, that is, in order to be able to fix it, do what is right, do what needs to be done. Do it for those who made the sacrifice, for what they have done is consecrated throughout the ages:

Now, having come this far. Ask whether you got the first three right. They might need some revision according to the fourth. Palimpsests aren’t just one layer, or two, but maybe thee and four. If you close the folios, which parts come together? Where was the severing really, just cutting a page, or depth-wise? ;-) Again, don’t forget for a second the Coriolis effect. Do the math for the proportioned parts as you reverse the Coriolis effect. You’re supposed to look through the letters! Measure where they hit the pages exactly. Don’t assume anything. And look up the contexts. Text without context is just your own little pretext. This is real life, not a game. If you think your IQ is going to save you, it is an iqlusion. Look undergruund, where we all end up, uu (you, no, really, you), as in WW, which is uuuu. Get it? Us. Everywhere. In all four parts. As the man said, there’s a historical record for the solution, right? History is one, not many, not scattered. We are connected. Find Him who rose triumphantly, though having taken on Himself all darkness, all evil, of all of history, for the sake of all. Chesterton once wrote of this, calling the reverse “effect” of our smashing history apart, having it come together again, simply a home-coming. We were there all the time and didn’t know it. When it clicks together, when the parts come together, we see the sacrifice, the dedication, the consecration for the ages. We see the way to figure out what in the world is going on in this scenario or that. We’ve seen it all flung apart. What a disaster that is. Seeing the Lord of History, who holds history in His hand, what a joy! He has rewritten History, but still bears some of the markings on His own body, the Word of God kind of being a Palimpsest Himself.

Anyway, to the analyst (who is said to have the same three initials as my mom), thanks for your service.