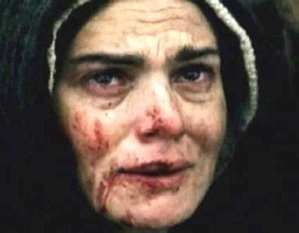 The Immaculate Mother of the Divine Seed, Yahweh Elohim Incarnate.

The haters of the Jews, the negationists who deny the Shoah, are also to be found among the traditional-ism-ists. They rampage in a swirl round about the internet saying also that the Jews have a different god than the Catholic God and never in the Jews’ history did they enjoy true religion. With the negationists, it is all the fashion to ignore Jesus (a Jew) and the entirety of those most Sacred Scriptures inspired and written down and canonical before the Word of God became flesh by way of a Jewess. Do these haters deny that Jesus (a Jew) said this (from John 8)?

“I told you that you will die in your sins. For if you do not believe that I AM, you will die in your sins.” So they said to him, “Who are you?” Jesus said to them, “What I told you from the beginning. I have much to say about you in condemnation. But the one who sent me is true, and what I heard from him I tell the world.” They did not realize that he was speaking to them of the Father. So Jesus said to them, “When you lift up the Son of Man, then you will realize that I AM.”

Does not this remind us of that passage from Exodus 3?

Jesus is the fulfillment of all the prophesies. He is Yahweh Elohim, the Seed mentioned in Genesis 3:15, the God of the resurrection, the living One who spoke in the fire of the bush not consumed by fire.

I dare any traditional-ism-ist to make a reasoned comment in the comments box denying that the chosen people who were to provide the fulfillment of the promise of redemption in Genesis 3:15 (salvation being from the Jews, as Jesus said) have the same faith as Catholics have since the Apostolic age to the present day. No, really, go ahead! To get through the moderation queue on this post, you’ll have to make a real attempt at this. I’m guessing that this post will have no comments whatsoever.

Update: This video, which is queued to a most incisive section of seven interviews spliced together, is a statement of history presented to the ages…