Saururus cernuus, lizard’s tail, water dragon… Not out of its habitat on this steep path up the mountain near the hermitage, as this portion of North Carolina is officially listed as a world-class rain forest with, in fact, twice as much rain fall as the average rain forest. The forest floor is always soaking wet. I guess it’s the configuration of the mountains catching all the rain coming up from Gorges National Park, which acts as a kind of funnel.

This rather demonically named flower might seem an odd choice to give to the Immaculate Conception. But think of it this way: the flowers are mocking the fall of Satan, who fell from the heavens like lightning, which is enough to make her smile. :-)

Coming across this fine specimen while hiking up the mountain was rather good timing, as I was on a mission. On my long trip yesterday (today, really: got back about 1:00 AM, and “long” meaning just a few feet short of 500 miles), I hiked back a package of demonic paraphernalia that I had been requested to burn. 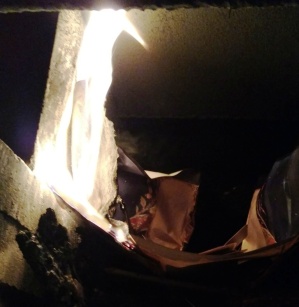 Unlike my invitation concerning tattered old Mass vestments which I’ll happily burn for anyone, do not send me anything related to the demonic in the mail for me to burn. Just, no. Get an exorcist from your own diocese to do the necessary for you. Again, with just one match to a little section of a waxed vegetable box, and while praying to Saint Michael the Archangel and, of course, to the Immaculate Conception, who crushes the head of Satan with her humility, the flame begins to do its work:

And then the conflagration:

On the trip, I also took the opportunity to make a general confession to another Missionary of Mercy, who was in the area where I was visiting. We plotted some things for the remainder of this year of mercy and solved, of course, most every problem in the Church and the world. Very refreshing, leaving me with a great deal of joy before the Lord.

And yes, I had a chance to catch up with the neighbors and, yes, Laudie-dog took a nap in the hermitage lazily keeping a half-open eye on the flames in the wood stove. And all is well at the Shire. But, I know, the Shire is not everywhere. There is Mordor. So, back into the fray…