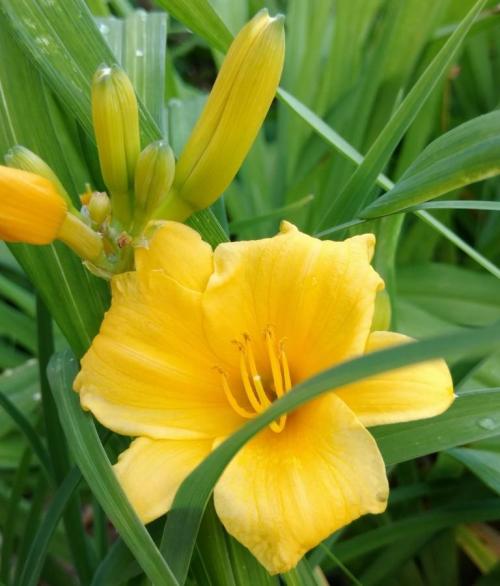 These flowers, just under the Calvary scene out front of our mission church of Prince of Peace up in Robbinsville, NC, just keep doing what they are supposed to do, blooming away in all their glory greater than that of Solomon, giving honor to whom honor is due in their own way, not more, not less, not something on the side, just what they themselves are to do. Now, isn’t that a good example for us, just to be in humble and prompt and eager obedience to our Lord. But, we have all the effects of original sin to deal with, weakness of mind and will, emotions all over the place, sickness and death. And we don’t do what we should do in humble thanksgiving and friendship with our Lord if we count on our own strength and wherewithal as at any rate we have none of that. This is why Saint Francis was such a nature boy, taking in the good example of nature by depending on the strength given us by our Divine Lord and Savior, the Son of the Immaculate Conception. Too bad people think he is a nature boy because they want him as an example for simply following after our fallen human nature. No. Saint Francis looked to Seraphim, to the cross, and wound up with his very self being crucified to fallen human nature, bearing as he did the very wounds of our Lord on his body, the wounds of the One who is the Creator of nature. There is no one, of course, who could appreciate the great example of nature more than the Immaculate Conception, who was nature’s perfect boast, who perfectly bore the weight of the glory of sanctifying grace, the indwelling of the Most Holy Trinity. There is no one who knew more acutely that although original sin never touched her, she was also redeemed. How humbly thankful she was for this redemption, for being able to take in the example of nature in her eager and prompt obedience to the will of the Most High, she giving her fiat, her yes in answer to the will of God, that she be the Immaculate Virgin Mother of the Incarnate second Person of the Most Holy Trinity, that she be the Mother of God, the God who created nature. The saints bear the same love within themselves. This is a great joy. So, Saint Francis a nature boy? Sure. Because he’s also a good son of the Immaculate Conception.