On Immigration: bait and you’ll receive 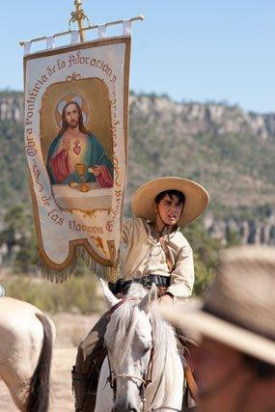 Saint José Luis Sánchez del Río, soldier and martyr, because “all those Mexicans are the same!” Oh, I forgot, I was supposed to pick on someone who wasn’t yet canonized, you know, someone undocumented and who, say, committed a non-violent crime years ago but was still in the system at the invitation of the system, so that we could kick all Mexicans in the face with impunity.

As it is, there were some spectacular and well reasoned comments on ICE deports undocumented working tax-payer contributing mother / wife to spread fear among undocumented, which I very much appreciate. Thank you.

But then another comment came in that was ranting away, with the author apparently having skipped reading those comments, very much upset. Here’s part of a very long comment. Pardon my emphases and [sometimes sarcastic comments]. And if I’m a bit rough here, please know that this person is a friend who I think can take this reprimand.

“I have no sympathy here. There are plenty of people who desperately want to come here but wait to do so legally. [This is continuously more difficult, next to impossible as the years, months and days go by, with contradictory, complex laws, layers and layers of labyrinthine mazes. As one commenter put it, this is somewhat our fault. We should streamline the process without foregoing safety. The thing is, we bait people to be illegal by baiting them to skip the line but also nevertheless to be in the system, checking in with ICE, paying taxes, etc.] I also have issue with the number of mexicans who are setting up their lives here with no intention to assimilate. [So, you know all of them? Can you name them? Even one? Did they tell you they have no intention?] It makes me crazy [!] when I enter into commerce [When you’re at the cash register? Who says to the cashier: “May I enter into commerce with you?” While that’s English, no one speaks that way. It smacks of a foreign speaker. What are doing in this country? You foreigners are all the same. You should be deported! ;-) ] at a place where the staff is speaking another language while waiting on customers who speak English. [Did you try to speak English or were you just offended? Did you greet the cashier in English or just fume about it?] I complained at a big box store because the cashier spoke in another language to an employee [Esperanto? Latin? Swahili? French? German? Russian!?] who was standing around [as security because of the presence of crazy people? as a cashier manager? as someone giving lessons in laziness?] and also to a customer [who spoke the same language? That’s polite, isn’t it?]who was dressed in a similar manner [So, you’re a writer for Saturday Night Live? What does that even mean? What are you really angry with? Do “they” have better taste than you? Are they more stylish? More “with it”, “up to date”, “mod”, “hip”? You’re envious?]. She uttered not a word to me the entire transaction and was solely focused on her two compatriots. [I often go through a checkout on the phone, which is really annoying, I know, but sometimes things can’t wait. An accident has occurred and a priest is needed, etc. I might speak in whatever language. At any rate, maybe they didn’t say anything to you because you didn’t say anything to them because you were too taken at looking at them all aghast at your own lack of style. Did you look angry? Impatient? Were they talking about trying to arrange a welcoming party for, say, local Russians to the neighborhood? Maybe they were talking about signing up for classes to perfect their English? Our Spanish speakers here put on a number of events for the local law enforcement. They arranged that in their native tongue.]

That’s not how the typical transaction goes in this country. [Try smiling.] She was also moving very slowly [like all those damn Mexicans, right?] at a busy time of year [like, what, Christmas? Kwanzaa? New Year’s? The Feast Day of the great third century Bishop and Martyr Saint Valentine? The Feast of Our Lady of Lourdes?] which was problematic because the long line wasn’t diminishing.” [Because they were having a good time speaking to each other and being human instead of fuming and crawling out of their skin? You’re just angry because you had to stand in line, right? Because no one else had a right to stand in line, right? Or are you really just racist? Or just a bad day? Lighten up. Jesus loves you too.]

Did I purposely write about Guadalupe Garcia de Rayos to guage reaction? Yes.

Don’t forget the purpose of this blog, noted by the title and blurb in the header:

Look. We’ve all crucified the Son of the Living God with original sin and our own personal rubbish. Smashing people down because they talk differently from you or just because they dress differently from you [more stylish!] won’t gain you many points at the final judgment. We’re hoping that people get to heaven, right? Eternity is a long time. Do you think they will want YOU there, ragging on them all the time, fuming about them? What if Jesus says “Shalom!” to someone else there, or to you? Will you throw a tantrum then?

And if you want to know my generalized impression of illegal immigrants, I’ll tell you, even though these are generalizations and therefore “racist”: I find that as a whole, these are the hardest working, most polite, piously Catholic, family oriented, peace loving, community minded, always but always helpful people I have known in my life. And I’ve been on so many continents and so many countries in so many cultures. And I also have an anecdote. Be warned of provocative language:

There was a young woman here who broke up with her white trash American boyfriend, who was always drugged up and always beating on her, leaving her a smashed up wreck continuously. Her father heard that she had started dating a Mexican and was planning on getting  married to him. The father immediately was enraged and hunted down the Mexican so as to beat the living tar out of him. Of course, he instead got the living tar beat out of him, because he just kept up the attack, but he kept getting pummeled, rightly, in self-defense, until an ambulance had to come. The EMT guy reprimanded the father to say that his daughter had lived a living hell with her white trash boyfriend, but was treated like a queen by the Mexican guy, who, in fact, was born in these USA and is an American citizen in good standing. We just need to slow down a bit. Changing circumstances can show us a bit about ourselves, and that’s a good thing. It’s then an occasion to be closer to the Jesus, the Way, Truth and Life. And that’s a good thing. We’re not against each other! We’re against the devil who wishes to work havoc among us.

Anyway, I want a sombrero like our Cristero saint above. I’m envious. But no frills:

8 responses to “On Immigration: bait and you’ll receive”