Flores for the Immaculate Conception (Irrelevance of the Pope? edition) 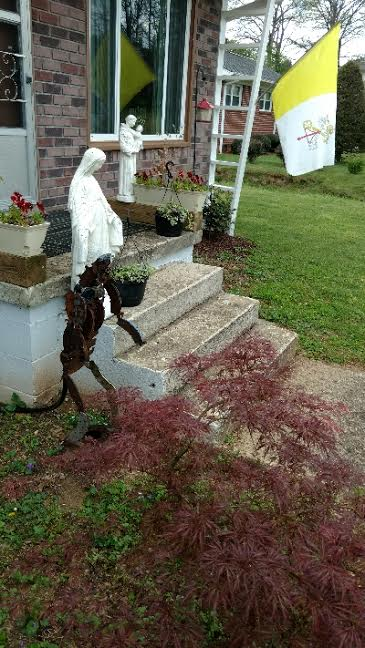 The ambiguity and contradictory messages of Pope Francis are so fast and furious that even if he came out with an ex-Cathedra statement about marriage totally faithful to Sacred Scripture, Sacred Tradition and all major interventions of the Sacred Magisterium throughout the centuries, it seems to me that, right now, relatively few people in the world would pay attention, as most would fully expect him to come out even the same day with a statement that would call his ex-Cathedra statement into question. In other words, people are losing faith and becoming cynical, frustrated, angry.

But that’s not where I’m at. And I’ll tell you why. Along with Pope Francis, I’m not given to ultramontanism, that most ugly form of self-referential clericalism there is. For those totally gone, please remember the weak link in the long line of the bishops of Rome, Peter, who denied our Lord three times. We know he later became Saint Peter. Fast forward in the clip below to about the two minute mark, where Peter kneels before Jesus’ mother Mary, confessing his sin of denial to her…

Here’s the deal: The Pope is relevant not because he has anything whatsoever to offer to the Church (infallibility simply being a “negative” gift to the Church of protection from any error he might otherwise come up with), but because he is fallen just like the rest of us and needs redemption and salvation just like the rest of us, and because despite all that he is the father of the family of faith on this earth and therefore we must be in solidarity with him, wishing him the best for his salvation. Any cynicism and frustration and anger on our part is our failure, whatever about him. We are to pray and do as much as we can to provide the love and truth and goodness and truth and kindness and truth of our Lord.

To put it another way: the Pope is relevant because I am a sinner. If I need Jesus and Mary to be in solidarity with me I had better wish that they are in solidarity with the Bishop of Rome as well. The Pope is, because of his position in the family of faith, a kind of barometer to the state of our own souls. Inasmuch as anyone despises his very person that is how much one despises Christ Jesus and, indeed, His dear Immaculate Virgin Mother Mary.

To put it another way:

What we pray to God for the Holy Father is the same thing we would wish for ourselves, that together we make our way by the grace of God to the Immaculate Conception and to the Most Blessed Sacrament. The seas are tumultuous. But we can all walk on water.

Mary didn’t despise Peter. She interceded for him with great love.

3 responses to “Flores for the Immaculate Conception (Irrelevance of the Pope? edition)”