Father Gordon J MacRae is not one to ask for prayers for himself, ever. But now, it’s different. He’s asking, with reason. For two reasons, actually.

(1) It seems that because of recent writings of Father Gordon J MacRae (about) over on TheseStoneWalls, there is some movement of prisoners in the prison, including in his ghetto within a ghetto, the worst of all nightmares, where he presently lives a life sentence in 24 square feet, 2’x2’x6’= less than the size of a coffin, in an eight man cell meant for two (wrongful imprisonment upon false accusation, he’s still in good standing in his diocese and with the Holy See: about). You would think that being in the worst of all worst spaces in the world would mean that the chance of being moved would bring some relief, but he might stay where he is while one of his cellmates of the past decades for whom he is about to get a commutation (please God) might be moved to a place where there cannot ever be any communication between them whatsoever. That would be terrible, as we wish that other prisoner, also our friend, Pornchai Maximilian Moontri, the best. This could happen at any time, today already, or any time in the space of the next four months or so. Meanwhile, with the movement of prisoners, there is total chaos, which brings much violence. Because of these impossible circumstances, he can no longer offer Holy Mass at all. We hope they get moved together to better housing.

(2) Knowing something of Father Gordon’s health situation (we talk almost daily), I asked him if we could pray to a particular saint for a particular ailment in his neck that he has. I mentioned that of the many special patron saints he has, whether Saint Padre Pio of Pietrelcina would be best in this instance. He agreed, admitting that, in fact, he had just last night asked the great sainted priest for help in this regard. I said that if I make a request for such a prayer in the online world it might cause a bit of a stir. I know that that’s something he intensely dislikes, not wanting to draw attention to himself, but, instead, in this instance, he agreed that the prayer request made far and wide would be good.

Father Father Gordon J MacRae has requested a prayer to Saint Padre Pio of Pietrelcina in regard to the crippling, extensive and intense pain and disturbance in his spine and neck and now shoulders (with acute and constant headaches) with now, for very many months, a mass of somewhat movable gel-like substance that is spreading. The infirmary at the prison wont look at, but just tell him to keep them informed as time goes on. That mass started to grow from a point on his spine/neck that was crushed when he was mercilessly beaten by [some people] at the beginning of his sentence decades ago. He can no longer turn his head at all. He cannot even look downwards. It is excruciating for him to write even one word for TheseStoneWalls, much less his well written, far reaching, influential articles. I don’t know how he does it. Please share this post far and wide. See the prayer below: 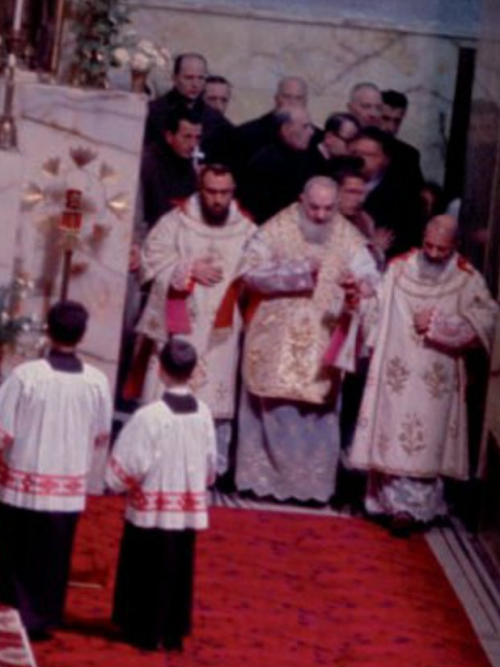 Prayer for the Intercession of Saint Padre Pio of Pietrelcina on behalf of Father Gordon J MacRae:

Lord Jesus, Divine Son of the Immaculate Conception, who deigned to grant your servant Pio a share in your mercy, granting him the signs of your own passion and death so as to manifest your own priesthood to the world, also permitted that he share in the ignominy of false accusation and limitation of freedom, even in his priestly ministry of hearing confessions and offering the Holy Sacrifice of the Mass, grant we beseech Thee, that by the intercession of Pio of Pietrelcina, that Gordon MacRae, now unjustly entirely deprived from saying Mass as he suffers wrongful imprisonment, might be granted this favor of offering your Sacrifice once again, and that he be completely cured of his present ailments so that he might bring many souls to heaven. And, if it be your will, grant that he also be freed from his earthly prison. Glory be… (x3)

Please know that this is not an attempt to storm the prison administration with indignant letters. Don’t do that, not even one of you. That would only terribly hurt Father Gordon. Don’t do it. Don’t even write a frantic letter to Father Gordon, asking him what’s going on. I’ve told you everything. Don’t put more burdens upon him. Don’t. Just pray. Really.

I only put up this request because I think that Father Gordon already knows perfect joy, and just needs a bit of help to help souls get to heaven. If he were to experience the logistics of perfect joy in this case (and I think unnecessarily), I think that he would be released from prison just before his death, in the middle of night, in the middle of Winter, with no place to go, and would freeze to death in a ditch, but with heart and soul close to Jesus, rejoicing to share in the passion and death of our Lord Jesus, offering his own sufferings as an act of intercession for the whole Church, which is perfect joy. Read about perfect joy from Saint Francis, Padre Pio’s own patron saint:

Perfect joy according to Saint Francis of Assisi

How Saint Francis, walking one day with brother Leo, explained to him what things are perfect joy.

One day in winter, as Saint Francis was going with Brother Leo from Perugia to Saint Mary of the Angels, and was suffering greatly from the cold, he called to Brother Leo, who was walking on before him, and said to him: “Brother Leo, if it were to please God that the Friars Minor should give, in all lands, a great example of holiness and edification, write down, and note carefully, that this would not be perfect joy.”

A little further on, Saint Francis called to him a second time: “O Brother Leo, if the Friars Minor were to make the lame to walk, if they should make straight the crooked, chase away demons, give sight to the blind, hearing to the deaf, speech to the dumb, and, what is even a far greater work, if they should raise the dead after four days, write that this would not be perfect joy.”

Shortly after, he cried out again: “O Brother Leo, if the Friars Minor knew all languages; if they were versed in all science; if they could explain all Scripture; if they had the gift of prophecy, and could reveal, not only all future things, but likewise the secrets of all consciences and all souls, write that this would not be perfect joy.”

After proceeding a few steps farther, he cried out again with a loud voice: “O Brother Leo, thou little lamb of God! if the Friars Minor could speak with the tongues of angels; if they could explain the course of the stars; if they knew the virtues of all plants; if all the treasures of the earth were revealed to them; if they were acquainted with the various qualities of all birds, of all fish, of all animals, of men, of trees, of stones, of roots, and of waters – write that this would not be perfect joy.”

Shortly after, he cried out again: “O Brother Leo, if the Friars Minor had the gift of preaching so as to convert all infidels to the faith of Christ, write that this would not be perfect joy.”

Now when this manner of discourse had lasted for the space of two miles, Brother Leo wondered much within himself; and, questioning the saint, he said: “Father, I pray thee teach me wherein is perfect joy.” Saint Francis answered: “If, when we shall arrive at Saint Mary of the Angels, all drenched with rain and trembling with cold, all covered with mud and exhausted from hunger; if, when we knock at the convent-gate, the porter should come angrily and ask us who we are; if, after we have told him, “We are two of the brethren”, he should answer angrily, “What ye say is not the truth; ye are but two impostors going about to deceive the world, and take away the alms of the poor; begone I say”; if then he refuse to open to us, and leave us outside, exposed to the snow and rain, suffering from cold and hunger till nightfall – then, if we accept such injustice, such cruelty and such contempt with patience, without being ruffled and without murmuring, believing with humility and charity that the porter really knows us, and that it is God who maketh him to speak thus against us, write down, O Brother Leo, that this is perfect joy.

And if we knock again, and the porter come out in anger to drive us away with oaths and blows, as if we were vile impostors, saying, “Begone, miserable robbers! to to the hospital, for here you shall neither eat nor sleep!” – and if we accept all this with patience, with joy, and with charity, O Brother Leo, write that this indeed is perfect joy.

And if, urged by cold and hunger, we knock again, calling to the porter and entreating him with many tears to open to us and give us shelter, for the love of God, and if he come out more angry than before, exclaiming, “These are but importunate rascals, I will deal with them as they deserve”; and taking a knotted stick, he seize us by the hood, throwing us on the ground, rolling us in the snow, and shall beat and wound us with the knots in the stick – if we bear all these injuries with patience and joy, thinking of the sufferings of our Blessed Lord, which we would share out of love for him, write, O Brother Leo, that here, finally, is perfect joy.

And now, brother, listen to the conclusion. Above all the graces and all the gifts of the Holy Spirit which Christ grants to his friends, is the grace of overcoming oneself, and accepting willingly, out of love for Christ, all suffering, injury, discomfort and contempt; for in all other gifts of God we cannot glory, seeing they proceed not from ourselves but from God, according to the words of the Apostle, “What hast thou that thou hast not received from God? and if thou hast received it, why dost thou glory as if thou hadst not received it?” But in the cross of tribulation and affliction we may glory, because, as the Apostle says again, “I will not glory save in the cross of our Lord Jesus Christ.” Amen.”