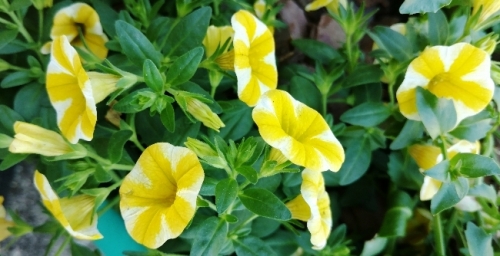 Jesus said to his disciples:
“This is my commandment: love one another as I love you.
No one has greater love than this,
to lay down one’s life for one’s friends.
You are my friends if you do what I command you.
I no longer call you slaves,
because a slave does not know what his master is doing.
I have called you friends,
because I have told you everything I have heard from my Father.
It was not you who chose me, but I who chose you
and appointed you to go and bear fruit that will remain,
so that whatever you ask the Father in my name he may give you.
This I command you: love one another.”

That’s today’s Gospel. Jesus is commanding us to ask for the grace of martyrdom, laying down one’s life for one’s friends, the greatest love, how He loved us. That’s the logic of that passage. Inescapable. Totally. This is what we are to ask of our Heavenly Father. I’m guessing that that request would make our dear Mother Mary most happy.

The flowers I put up for this post are in front of the statue of the Immaculate Conception at the rectory. They are yellow and white, the colors of the Holy See, a tad bit Papist of me. Yes. This really makes people angry. It makes Islamists upset. It makes ultra-traditional-ism-ists upset. It makes the filthy liberals upset.

It is most Catholic to support not only the idea of the office of Peter (which support, cut off from Peter himself as so many do, is a heresy for the reason that the Church is founded on Peter and not on a mere idea of an office), but it is also most Catholic to support Peter himself, his very person, which filthy liberals, ultra-traditional-ism-ists, Islamists, etc., are loathe to do. I take a lot of heat for supporting the very person of Pope Francis. And that’s just fine with me.

Just because one is supporting Peter himself doesn’t mean that one is supporting everything that Peter says. That would be absurd. Peter himself wouldn’t stand for it. I couldn’t care less if Peter bets on a certain horse for the Kentucky Derby. I’ll bet on my own horse, or actually not bet at all. But I will pay attention when the Bishop of Rome, the successor of Peter, the Vicar of Christ speaks not just for himself but as the head of the Catholic Church, and not just to some group or another or as part of some dialogue (such as is the case with Amoris laetitia), but when he is speaking to the universal Church, to everyone, and as a teacher, not a mere participant in ongoing dialogue, and also, conjoined to this, when he speaks on a matter of faith or morals as found in Sacred Scripture and Sacred Tradition (or in the natural law for that matter), especially when this is deciding a controverted point.

2 responses to “Flowers for the Immaculate Conception (Requesting Martyrdom edition)”