Our tiniest of all parishes has wildly interesting people. Many are military and many number among the intelligence and scientific community. Jerry Hudson is a good example. (And, yes, it’s that Hudson.) We had his wake 5-4-2018 and the funeral 5-5-2018. He was edging on 80 years young. I will miss him sorely.

As with most ultra-extreme-genii who change the entire world in which we live, Jerry dropped out of High School. Jerry was profoundly patriotic, profoundly Catholic. He was scooped up by the USAF in his Junior year. They gave him further schooling, specialized, fit for his smarts. After that, he was known simply as “The Mechanic.” It’s like calling “Good” Will Hunting “The Janitor.”

At one point, Jerry went through the FBI qualification exams with extreme perfection.

That hits home with me. I myself have seen it before, up close and personal, at by far the most academic of Catholic institutions. It is frustrating. There is so much that could be done. But, that’s just how it is. It is what it is.

In a what could have been imagination, what if the FBI had instead created a specialized investigatory IG position for Jerry. The Strzok and Comey scenarios and all the rest of the Department of Justice corruption would most likely have never come about the way it is today. Anyway…

There’s no love lost between the FBI and CIA. So, of course, after Jerry was dumped by the FBI, he was picked up by the CIA. I love that. Since he was “The Mechanic”, they put him to work on the U2 spy plane for its missions over Russia, from Turkey – yes, don’t deny it – where he kept the pilots in good order with good oxygen for four years. Mind you, he figured out how to do this for a plane flying many miles higher than the ceiling of our most capable passenger jetliners even while he himself was living in a tent (since you can’t have a base for a plane that doesn’t exist, right?). Mind you, today, we let our fighter pilots die in our own day because of CYA cover-ups, we not wanting to admit that we don’t know what we are doing in trying to keep the pilots in good order with oxygen. For shame! Sure, the guts of planes change. But we should investigate the procedures by which Jerry was able to figure out problems. We might learn something that will save lives today. Science is as much about method as facts. Knowing the facts doesn’t mean understanding. Jerry knew stuff, and understood, and could “fix it.” After all, he was “The Mechanic.”

And, by the way, that stint with the CIA helped to change quite entirely the course of the cold war with Russia. He was, perhaps, at that time, the biggest enemy that Russia had. He was also instrumental during the Cuban Missile Crisis. Jerry is a great American hero, yes, as CIA. I sometimes make purposed poking fun at the CIA, or what looks like serious criticism, but let me for a moment be serious:

His baby, above. Just a few of the missions he worked on (but much more than these):

Obviously, he was from Kansas…

I mentioned that Jerry was Catholic. Most of the crowd at the wake and funeral were non-Catholic, mostly family from everywhere and friends. But there were also quite a number whom no one had seen before, were not related, came late, left early, and, if you know what to look for, very much fit the bill as reps for, you know, The Company. I’m very touched by that. Very human, that. And it’s a recognition by The Company of just what an impact Jerry made not only on America but on the entire world in stopping Russian imperialism dead in its tracks. With the passing of Jerry comes the passing of an entire era. He should be recognized in Congress post-mortem. The Air Force came up and did the flag ceremony for the burial. Very touching. They really did a good job as it was obvious this was much more than a job. This was personal.

Meanwhile, Jerry was always helpful, always encouraging, always a friend to everyone. Jerry encouraged me on my homilies, loving the irony of mercy being founded on justice. He loved that I myself led the rosary during adoration, saying that he never once in his life saw a priest doing that, and loved to see a priest who is a believer. As I say, he was always encouraging, looking for things by which he could encourage people. I mean, when does anyone encourage a priest? He did. That’s the kind of guy he was.

When he had some medical difficulties recently, we spoke of going to heaven as I gave him the anointing and such. He simply enjoyed life because he had a deep faith, a wild sense of irony. Those two go together, faith and irony, very well and make up the Jerry we all knew and loved. You’ll be sorely missed, Jerry. God speed, my friend. Tell Jesus how we want to get to the gates of heaven… and then get in!

Mind you, Jerry was a genius in the extreme. And yet he was always the little kid, full of wonder, always wanting to learn more, always thinking, pondering, but with joy, never with fear or bitterness, knowing that he knew nothing compared to what there is to know both in this life and in the life to come. Would that we could all retain our wonder as kids, and be joyful in learning about things here on earth, and then, please God, in heaven. Here’s Jerry in his younger days, just like his older days: 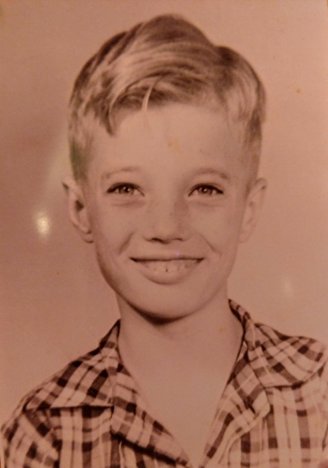