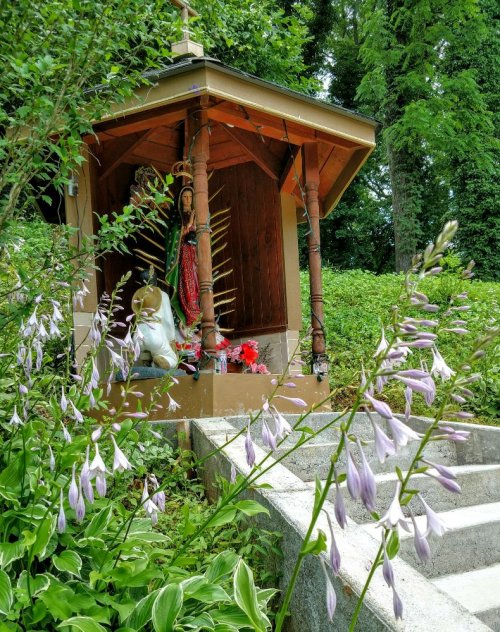 Meanwhile, the shrine is taking shape. Our Latino community is doing this and then that to the Guadalupe shine beside our little parish church. Mind you, that’s as all the immigration drama continues, while they fear being deported.

There are lots of ill-thought out comments these days. I should like to remind some people of some things.

Anecdote in my parish far North of the border, in Western North Carolina:

The police called me up to take an emergency trip to the hospital emergency room to translate for them. They had two Latino children in the ER. They had chased a van which then had a roll over in the ditch at high speed. The two kids inside were taken to the hospital by the police while the adults fled, abandoning the kids. Even though the police figured out that the adults were not the parents of the kids, they let the kids go. Where? I don’t know. Why? I don’t know. Is that the best policy? No.

Meanwhile, flowers are arranged for Jesus’ good mom. Why? Because she knows, she understands. She knew all the boys in Bethlehem had been slaughtered because of her own Son. She knows what it is to be in exile in an enemy country for years. She knows the violence of torture and death up close. She knows. That’s why. Doubt that? Look into her eyes:

2 responses to “Flowers for the Immaculate Conception (“caged kids” edition)”