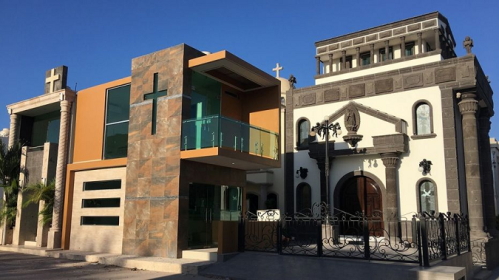 Tim MacFarlan – he must be as crazy as me – paid a visit to Sinaloan cemeteries to take some pics of the mausoleums of the cartel, some of them costing as much as US$500,000 (with air conditioning and wifi), which is more than 118 years of wages relative to the more well paid Sinaloans.

He says that the cartels give a lot of money to the Church in order to think that they can somehow buy their way into redemption. I doubt that for two reasons.

But, people are unreasonable and they get scared and they do take money like that, but it sounds like Tim is conflating the ways of Sinaloa with the Italian Mafiosi. Whatever. I have no beef with Tim. Maybe he’s right.

He puts the number of deaths related to the cartels since inception at 200,000.

I regret this. Also because my stolen identity was used to makes arms transfers to straw purchasers. That’s what occasioned Main State putting me on the perpetual program.

Anyway, do I think that the cartel bosses do this kind of thing because they believe they’ll have a better time of it after they die? No. Not at all. I think this is a manifestation of how gullible they think their young henchmen are, giving them a motivation not to worry about what they do.

I don’t give credence to those who kill my fellow priests and bishops and the Cardinals of the Church.