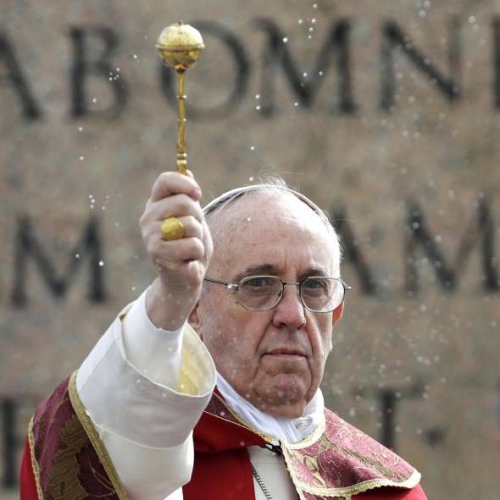 You have heard that it was said, the papacy is basically somehow just like you know kind of like an “office”, a “function”, stuff to do or not more or less than any other bishop, but just a bishop with another mandate that he can ignore or put into action, but it’s no big deal unless he’s wrong, we think, because we’re all more infallible than him, and then we just say that his “office” has been taken away, you know, like Judas, so that he continues to be a bishop, but just removed to say, some island, like, I don’t know, Corsica or something.

But Peter is not Judas. The papacy is not a mere office. Infallibility resides not in an “office”, but in the very person of the successor of Peter. In all of this, he is expendable according to the decision of the one who has already established in the heavens what Peter had better agree to on earth. It’s not our decision. It’s all quite glorious, or quite violent. Witness the death of Sixtus V. Yikes!

Infallibility only comes into play in restricted conditions, that is, when the Bishop of Rome precisely as the Successor of Peter teaches on faith or morals to the universal Church especially deciding a controversy. It does NOT come into play with throw-away baitings of what is expressly defined by the Holy Father as being mere DIALOGUE. Why is that so difficult, except for hatred? Has Pope Francis ever said anything in infallible mode up to the time of this writing? No, he has not. So, as I’ve always said and now repeat:

We are to stand in solidarity with the Holy Father. We are to pray for him. We are to defend the papacy in the very person of the Pope, for this is where the papacy resides, in the person of Peter, not just some loosely defined “office” of Peter. Get it?