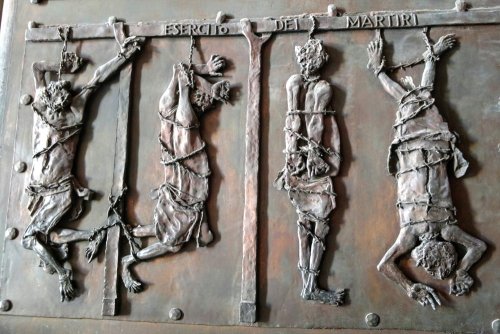 The other week when I snapped this picture of one of the doors of Saint Peter’s Basilica in Rome I very much noticed the grotesque nature of how martyrdom comes about: Yikes!

But now, not long after, I review this scene of the martyrs and call to mind the Beatitudes and so long to be with them, no longer seeing anything grotesque, no longer any shock. I only see their enduring love and oneness with the Truth, who is our Way and Life. I see that such love, given them by God as placed into tabernacles of the Holy Spirit is a love stronger than death, is enthusiastic to go to heaven even in the midst of torture and death. Such great love! Look at that! Such great love!

Then, last night, the special report below from Church Militant showed up at the very top of my youtube recommended-for-me list. The old television journalistic investigative reporter spirit comes to the fore for Michael Voris especially in this episode. Hats off to him. Spectacular work. Really well done.

I would add just one more thing to that report: there really are a lot of priests like the one spoken about in this special report. It makes me think that the author of a certain eleven page report is not wrong to have removed himself from availability to others to do him harm. Saint Thomas More insisted that we have to use our wits to stay alive, but if Providence provides that we be martyrs, well, that’s up to the Lord. This is well worth the watch. While I say “Yikes!” again for a moment, I then am again in awe of the martyrs, how they have a love which is stronger than death, the Love of our Lord, who is Himself the One, the only One, who will come to judge the living and the dead and the world by fire:

After seeing this, I immediately called up the author of one of the “packages” I brought over by hand to be directly delivered into the hands of Pope Francis with particular oral explanations (which was done). I told the author of that “package” that he had better watch his back. We had a great discussion about heaven. I am heartened. I just now spoke with the author of the other “package” and told him the same thing. Both packages go the heart of the present crisis. They indicate that something must be done.

But, all the same, whatever way it works out, if it all comes to violence and martyrdom, rejoicing in Jesus’ Truth and Love stronger than death is always the way to go. Again, I am heartened by the witness of of the authors of my “packages.”  So, just to say:

4 responses to “Whistle-blower Priest murdered?! Rejoice and be exceedingly happy…”