Some practice altars were set up to refresh the exactness of rubrics of the guys for low Mass. 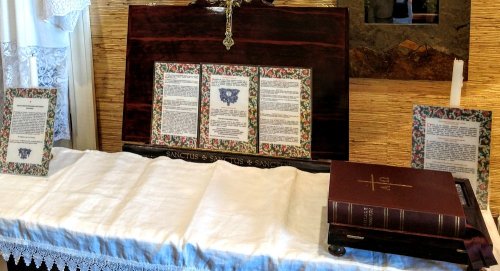 It’s surprising who was assisted on this or that point. It’s always good to have other sets of eyes for that which is important.

When teaching a seminarian the low Mass back in 2010, he was cautioned that should he mess up on this or that rubric he might hear a gun get racked in the congregation as a warning to stay awake. There are those who get apoplectic with an honest mistake. When he made a mistake I would imitate the sound of a gun being racked. There was laughter all around.

He’s now a priest. He was with us sharpening up his rubrical precision. Upon a miniscule mistake I tapped my holster… click… to laughter… bringing things full circle.

One of the vicar foranes of the diocese, himself expert with guns, asked for the Glock and – ensuring it was empty of any possible magazine and any possible chambered round – waited for the next small slip up so as repeatedly to make the tell-tale racking sound with the slide multiple times, again to the laughter of all.

A good time was had by all. Newly scheduled low Masses are being added around the diocese. I love this diocese.

By the way and just to say, I once asked an FSSP priest if any of their members would make a breathless correction if anyone made an honest mistake. He said never. Not in the seminary. Not after ordination. Breathlessness is only for those who don’t know Jesus.