I mentioned to Father Gordon the other day that I received a quite severely revised Ancestry DNA report according to a new merging of data bases. I said that I was much more Eastern European and Russian than was previously estimated. He said that he wasn’t surprised at all, and then flatly added:

“Everybody from eastern European descent has 2% Neanderthal DNA.”

And then, speaking directly to the readers of this blog again added even more flatly:

“This may explain Father George’s lack of subtlety.”

Meanwhile, while my dad’s Scots-Irish surname is holding on with the travel of that family through centuries in Germany, there is this: 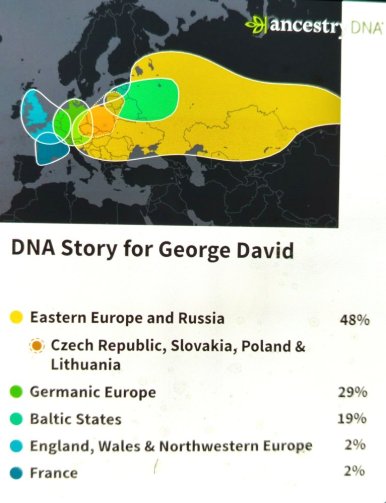 There are a zillion connections in Mazovia Province and Łódź, and the same for Lesser Poland, Małopolskie and Świętokrzyskie. Southern Poland would make sense from her specialized Yiddish derived vocabulary, with the biggest curse she had being to say that someone surely came from “Lower Slobbovia,” Al Capp’s thought-to-be-made-up-country but which is surely Slovakia just to the South of Lesser Poland. Al Capp’s references about “Lower Slobbobia” were rife with Yiddish-isms.

Catastrophically, pretty much every Jew, to a man, to a woman, to a child, was killed off in the Baltic States by the Nazi regime.