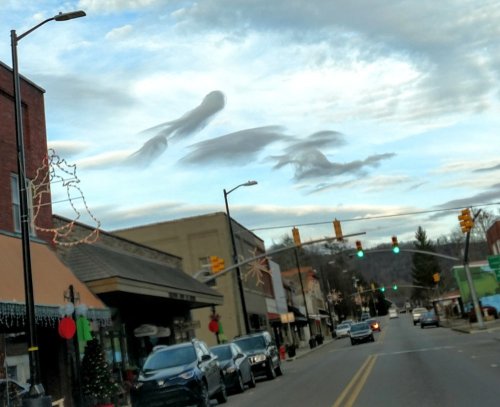 It’s fun to have a good imagination. Let’s play “What if?”

These pictures were taken late afternoon 13 December 2018. Moving relatively quickly. Note, above, how the other surrounding, higher clouds, move away from the darker clouds in a circular fashion, pushed away by the darker clouds below. That‘s an indicator that something serious is amiss. The darker clouds aren’t dropping, but rather moving over the terrain. I’m guessing that the length of this event, from nearer to farther away, just of the darker stuff, is about a mile all told. Give it a couple of miles for the spreading of the upper clouds. Give it more for whatever effect on the ground. Remember, these are moving relatively quickly. I was really fumbling to get my camera in traffic as I didn’t want to just let them fly by. They are roiling and boiling but staying together.

At first glance I thought these were clouds of trillions of starlings. If you’ve ever seen the shows they put on – common in Rome, Italy – you would know what I mean. But these didn’t have the ever changing shapes of starling acrobatics. You’ll notice that there seems to be a more concentrated opaque center of the “clouds” with a weird semi-transparent “net” – if you will – draped over the opaqueness. But, let’s look closer: 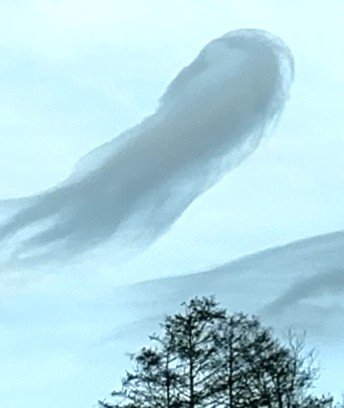 The outer “net” is not liquid, like rain, as it defies gravity, and equally surrounds the center both below and above, all around, like roiling boiling fumes, not H20 based, with H20 opaqueness, but more like gasoline fumes that roil and boil and are transparent, providing a more blotchy appearance. What you’re looking at is not the wispiness of H20 clouds, but the the messiness of roiling boiling fumes. Let’s tweak the raw picture a bit to make it darker:

This is just 50 miles as-the-toxic-cloud-flies from Oak Ridge, TN, with all of their testing sites. These were coming from exactly that direction. This defies further description. By the time I got home, just a stone’s throw away, these darker clouds had already raced away.

It’s just that I’ve never seen anything like this in clouds since I was born. Anyway, if these were toxic and just a test, there’s no reason to question it. After all, there’s no one important who lives in these remote mountains, right? //off sarcasm