The King of Fishers! Jesus to Peter…

My last sightings of the majestic Kingfisher were back in Minnesota at “The Pond.” The King has a magnificent crest reminiscent of a crown. You can’t see it in the picture above as his head is turned entirely sideways in the opposite direction as he rearranges the swallowing in one gulp of a fish about as long as he is. This is just some few feet outside the window of the rectory. He’s over the creek next to the rectory. There are plenty of minnows and small fish. Here’s what they otherwise look like: 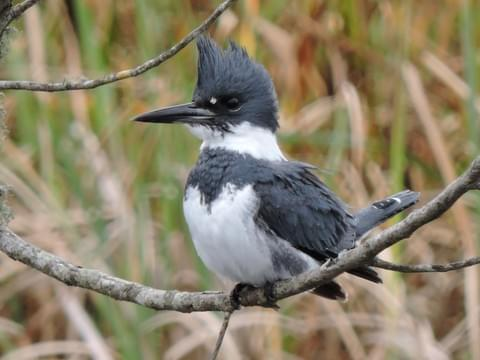 I remember the ones in Minnesota had blue markings and perhaps the familiar rust-belt. And they were much bigger, more like the size of crows, much bigger than Blue Jays.

Meanwhile, Father CC in the diocese here texted me about the reading of the Passion for Palm Sunday. As is his want, he pointed out some worthy to be noticed incisive irony on the part of Jesus over against Simon Peter:

Pray for Pope Francis, that he may confirm the brethren and not deny our Lord.

Pray for Pope Francis that he might follow our King, Jesus and be a fisher of men.