Standing in solidarity with the Pope

Tradition-al-ism-ists: “So, Father Byers, when did you stop being Catholic?”

Tradition-al-ism-ists: “So, Father Byers, when did you abandon the faith, the truth, the Church, your obligations as a priest to lead your flock to heaven?

Tradition-al-ism-ists: “So, Father Byers, why are you such a hypocrite, pretending to be Catholic, but supporting Pope Francis with prayer? You traitor, you false priest, you servant of Satan!” 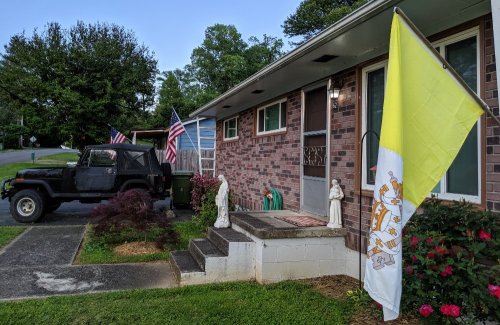 Since when is it required NOT to pray for someone, anyone, in order to held to be Catholic? It is the supreme denial of Jesus’ mandate to pray for others, even if we consider them to be our enemies, if we require of ourselves and others NEVER to pray for the Pope.

No matter how many times I try to get Tradition-al-ism-ists to lay aside theological differences as being irrelevant to whether or not we pray for the Pope, it is never about helping each other get to heaven with prayer, but only about politics: It is held that if you pray for someone, it means that you agree with everything they say and do always and everywhere. Talk about ultramontanism! How very ironic.

Guarantee: Not even one Tradition-al-ism-ist-ic person will see the irony, but instead just be triggered to condemn any and all prayers for the Holy Father as being a sign of Satan, that one holds that everything the Holy Father says and does is an ex-cathedra proclamation. Guaranteed.

Meanwhile, what did Jesus say? That Peter would be sifted as wheat by Satan, but that after he turns, he is to confirm the brethren? Yes? Well, then, did Peter have anyone to pray for him while he was being sifted as wheat? Maybe, I don’t know… Let’s see… Perhaps Jesus’ good mom? Is she demonic? And – Hey! – Maybe Jesus prayed as well? (See Luke 22:32). Really. It’s there. In Scripture.

And before anyone, laughing, mocks to say that I must be admitting – finally – that Pope Francis is in the grip of Satan, instead, I say this: Satan sifts us all as wheat. No one is exempt, not Mary, not Jesus. That’s not the question. The question is whether or not we will join Jesus and His good mom in praying for the Successor of him who is now SAINT Peter. Hail Mary…

And still I can hear it:

4 responses to “Standing in solidarity with the Pope”