At Myrtle Beach I saw things with both mom and dad that had a huge effect on me. They would bring me to the US Air Force Base (the bones of which are pictured above) and have me eat with the pilots and such. The base would soon close because of a decision to ditch the A-10s. Ironically, it was just now decided in 2019 to upgrade this close air support fighter especially loved by the guys on the ground.

In the speech to announce the closing, the officer said: “It’s the end.” My mom copied that out in longhand, again and again, on bits of paper that I would find later here and there, noting the context of the closing and the name and rank of the beloved speaker. The closing acted for them as the closing of an entire era that was held in living memory, but that too, they knew, would soon pass as well. “It’s the end.”

The two of them used to sit at the end of the runway when it was still military and watch the guys practice their take-offs and landings amidst fancy stuff in the air: warthogs and other jet fighters, a great show instigating lots of memories for dad in one way (surely calling to mind those who didn’t live to die another day back in WWII and the Korean War) and for mom in another way (surely calling to mind those many millions who were murdered by the Nazis).

Dad would later have some health incidents for which I was present in Myrtle Beach. Mom would die at Myrtle Beach in a place pictured above. Here’s a google-map shot of some items placed in an outdoor museum the South side of the runway, which, if you have good eyes, you can find in the picture at the top of this post: 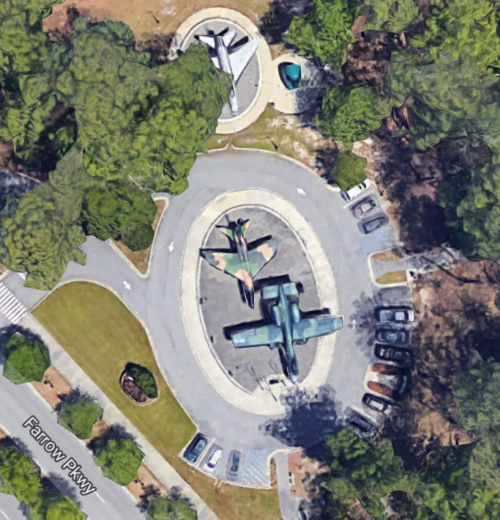 Here’s a fantastic video with some flying action shots, including the Vought Corsair. How they’ve changed since the gull-wing Corsairs dad flew!

Both mom and dad had been through some great spiritual retreats at Mepkin Abbey in their last years. They had taken great notes and spoke glowingly of the retreat master. And for that I thank the dear Lord. “It’s the end”? No. They both learned that, in fact, as the Funeral Mass Preface has it:

“Life is changed, not ended.”