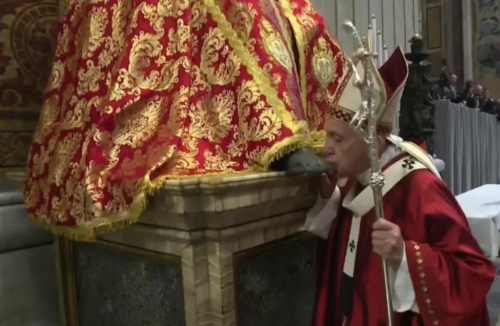 How’s your Italian? Pope Francis spent his whole homily on the Feast of Saints Peter and Paul talking about Jesus and us getting closer to Jesus by receiving His forgiveness for our sins. Stunning, really. There was no ambiguous reference to non-repentance or half-hearted conversion as a process, meaningless accompaniment, blah blah blah… No. Just receiving a proper absolution and walking in friendship with Jesus.

That continued in the Angelus message:

I mentioned this to another priest and he said that if I say anything good about Pope Francis I will be dumped by any followers and dumped on as I have been when I say that I’m standing in solidarity with Pope Francis by saying that I’m going to continue praying for him. He’s always asking for our prayers. Anyone in his position as successor of Peter needs our prayers. Does that mean that we agree with everything he says about anything everywhere all the time? No.

But people are really maliciously stupid about this. Jesus says that He prayed for Peter that his faith might not fail. Jesus also called Peter “Satan”. Peter did deny Jesus. Three times. Are we to say that Jesus is stupid for praying for Peter that when Peter turns he is to confirm his brethren in the faith? No. But people effectively do this, becoming themselves agents of Satan over against Jesus. Don’t do that. Pray for the successor of now Saint Peter. Get it?

5 responses to “Pope Francis and… Jesus”