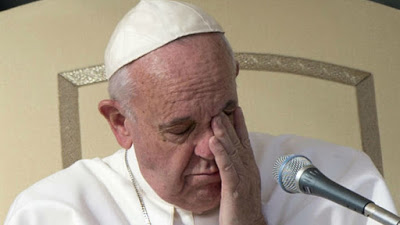 Pope Francis sums up his heresies

I’d like to comment just a bit more on his imperative command that “the pastors must lead their flock between grace and sin, because this is evangelical morality.” Let’s see that paragraph again:

For my response in what I hope is a dialogue instead of my just getting smacked down, I would like to use the woman caught in adultery at the beginning of John chapter 8, what with Jesus evangelically forgiving her and, we cannot deny, evangelically commanding her NOT to sin again.

This has always been my practice of mercy in the Confessional as a priest and Missionary of Mercy. If someone, a penitent, is in fact repentant and has a firm purpose of amendment of life according to the Good News, there will be an absolution immediately provided. One may sincerely try to live in grace. But one may fail. But one may return to the Confessional for more needed guidance and understanding of what repentance and amendment of life practically entails. But one may also then be ready for absolution and that is then provided.

Such is entirely different from what Pope Francis proposes here with his talk of leading the flock between grace and sin, with the operative word being merely leading, always leading, but never putting such a soul face to face, heart to Heart with Jesus, always and only between grace and sin, so that the dialogue, the process is the soul having arrived, with there being nothing beyond the dialectical ideology of thesis and anti-thesis. Grace is no longer a friendship with Jesus, walking with Jesus, heart to Heart with Jesus. Grace is instead an ideological goal, and idea, a “horizon statement” to which one never arrives. “Go ahead, adulterous woman, go ahead and sin again! Go ahead, sin and then go up to receive Holy Communion! Never actually repent!” That is what Pope Francis is saying.

And now we know what that not so ambiguous footnote in Amoris laetitia certainly means: active adulterers are to be encouraged to continue their adultery and to go to Holy Communion.

Good thing Pope Francis called Amoris laetitia a dialogue in the opening paragraphs of that screed. But here he clarifies that supposed ambiguity. It’s now certain what he means.

The presumption in all of this is that all penitents are incapable of living a moral life, a life of grace, that Jesus’ love and Jesus’ truth, that Jesus’ friendship, that Jesus Himself is powerless before sin. This presumes that we are all lost, all going to hell, and we’re just somehow trying to please everyone and be praised ourselves for just going along with sinfulness and encouraging everyone to do the same. What a dismal, dark, anti-evangelical view. To me, it seems like a blasphemy against what Saint Paul describes as the Body of Christ, the Head of the Body and the members.

The technical word for encouraging people to remain in sin, when used specifically for a Confessor who is “guiding” a penitent in this way, is solicitation. This is a crime in Canon Law, the code of law of the Church.

In other words, the priest is encouraging a penitent to continue sinning in whatever way. This turns a possible sin of weakness into a sin of real corruption, but even worse. The sinner who was guilty of a sin of weakness is now encouraged to purposely go ahead and sin. This is a direct mockery of God and a sin against the Holy Spirit.

Pope Francis is encouraging all the priests in the world and all penitents – everyone in the world – to mock God and sin against the Holy Spirit. Talk about being Promethean and Pelagian and self-referential and self-absorbed…

Never letting Jesus’ little flock get close to Jesus, always keeping that little flock in a life of sin, telling them with jaw-dropping condescension that they can never actually live a life of grace and morality and friendship of Jesus, taking away their hope altogether, creating in this way an ideology out of the person of Jesus, making Jesus a mere “horizon statement” a mere “ideal” that we can never really reach, all of this is, objectively, a sin against the Holy Spirit.

Dear Pope Francis, what you are doing is Pelagian: You are forcing people to think that they have to trust in their own strength which they do not have, and so lead them to frustration and, losing hope and giving up, lead them to a life of sin, but, oooh!, always trying harder with the strength they do not have, which none of us has. How cruel of you, Pope Francis. Instead we are to lead people to humility, to know that they, that we have no strength of our own, and that we are therefore to depend on the strength of Jesus, not in the sense that Jesus just helps us out and we continue to depend on our strength that we do not have, but rather in the sense that amidst all our weakness Jesus will draw us up into His strength, His love, His truth, so that however weak we are of ourselves, we can still live in grace, by grace, heart to Heart with Jesus, always carrying the cross but always looking to Jesus. He’s the One. He’s the only One. Not us! But Jesus!

Meanwhile, Jesus, putting His own life on the line, standing in our place, the Innocent for the guilty, forgives our sin, and then we, seeing His great love, with humble thanksgiving and in reverence before Him and in all good friendship, we are open to hearing His reprimand to us, ever so lovingly given: “Do not sin again!” He tells us that not just as some sterile command for a sterile morality, as Pope Francis thinks, but with grace, that is His presence, with the indwelling of the Most Holy Trinity, having us be Tabernacles of the Holy Spirit, offering our bodies as living sacrifices so different from this fallen world, so different from our fallen flesh, so different from the fallen angels, we being living sacrifices of purity of heart and agility of soul, aflame with love of God and self-sacrificing love of neighbor. Jesus who is alive, who is love, who is truth, is the Jesus I know, before whom I am thankful. He has forgiven me so much. Thank you, Jesus. I promise not to sin again.

And, yes, this priest loves to go to Confession.

And that means you too, Pope Francis.

I’ll be your very own Missionary of Mercy if you like.