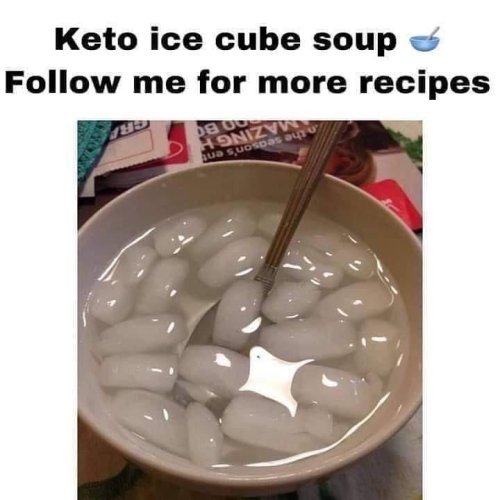 The ice cube soup picture was sent in by a reader making fun of Keto, all for encouragement, mind you. Day 81 was finished by having lost 44.6 pounds. That’s more than 1/2 pound a day, if you’re counting. Still feeling much, much better and full of energy and not hungry and able to exercise and lots of other health and psychological benefits. I’m NOT saying I’ll be on this diet much longer. Just until I reach my goal, which is to be in the upper range of “healthy” on the BMI scale.

BTW, I think ice cube soup is what pilgrims get to “eat” while doing a penitential pilgrimage to Saint Patrick’s Purgatory on Station Island in Lough Derg, County Donegal, Ireland. I think the cooks also throw in a very granules of black pepper for taste. The pilgrimage tradition goes all the way back to the fifth century, when Patrick was there.

Mind you, it’s not the ice cube soup that is in any way Keto. Whilst the pilgrims at Lough Derg relish their ice cube soup after having walked the rock in the ice cold water, they smell the aroma of bacon wafting along from the windows of the warm kitchen of the priests house. “Bacon.” That’s Keto! ;-)