Coronavirus: Holy Mass outside? NOT! We just kill the invisible enemy dead. 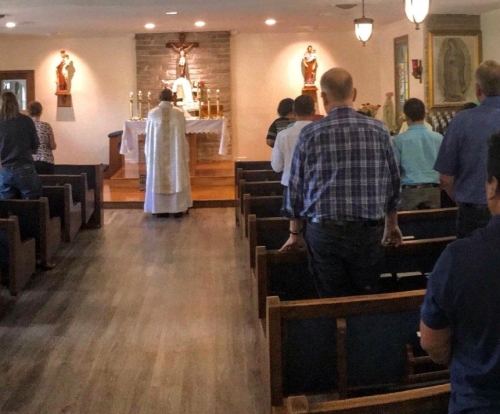 After all, this is the smallest parish in North America.

Governor Cooper in North Carolina was smacked down by a Federal Judge because of hateful discriminatory suppression of the free exercise of religion, which encompasses, by the way, freedom of worship as essential, and also free speech with religious and natural law formation of conscience even intervening in politics as that which is guaranteed. But Governor Cooper saw fit to insist that being in a church is unsafe (whatever of being inside a State owned ABC Liquor Store from which the Governor profits). Governor Cooper says that the air is bad inside a church. Really?

Let me respond to the Governor who is ignorant of what we, and I assume many, have done over the years with our heating and air conditioning units. On both campuses of this parish and in our Social Hall in Andrews, a retired NASA engineer installed super-strong ultraviolet light that kills mold spores as the air moves through the system so that the spores of more or less just a micron or two in size are instantly killed on the fly. This applies to a virus all the more. Nothing gets past the UVC lamp and lives:

We have the cleanest air in the world.

From Wikepedia: A germicidal lamp is an electric light that produces ultraviolet C (UVC) light. This short-wave ultraviolet light disrupts DNA base pairing, causing formation of pyrimidine dimers, and leads to the inactivation of bacteria, viruses, and protozoa.

In other words, the air inside the church is much more pure than any air out in a parking lot, no matter how hot the air coming from any back-mountain preacher-man like myself. :-)

Go ahead, Governor Cooper. Make an example of us despite the Federal Judge. I’ll have your ass [apologies to donkeys all] trotted before the Department of Justice in D.C. faster than you could read further insults to hypocrites proffered by the likes of the greatest of all prophets, Saint John the Baptist, and by the God-Man, Christ Jesus, Himself. I bow to the modus operandi not of the governor, but of the very Son of the Living God. I mean, I can list more insults coming from His lips to those who would suffocate religious rights. Do I really have to?

And then we can move on to the Old Testament. Need I do that, speaking of, say, she-camels and the like? ;-)

Besides John the Baptist and Jesus, I respond by recalling a modern saint:

2 responses to “Coronavirus: Holy Mass outside? NOT! We just kill the invisible enemy dead.”