Deescalating tender snowflake bullies. Humor in the midst of chaos. I laughed. 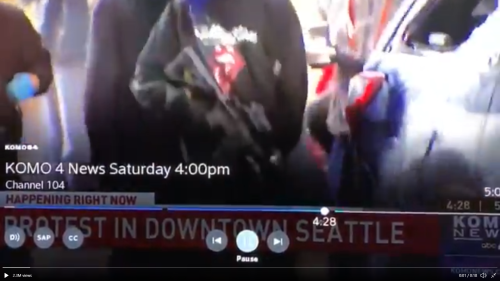 If you know anything about ArmaLite Rifles, say, number 15, as in AR-15, you know this this tender snowflake thug has his fingertip touching the trigger. He stole that from a police vehicle that the thugs were ransacking, and had fired it into the air. It was chambered with a full magazine.

But since all bullies like this – who dishonor the gentle giant, ever so polite and soft spoken George Floyd, by the way, what with George Floyd having worked with youth to help them NOT to become thugs – … since bullies like this are always tender snowflakes entitled to be bullies and expecting everyone to let them smash everyone down, they are never prepared for real confrontation unto deescalation.

So, what to do? 13FOX knew what to do. They had a security guard with them, not just a guy who qualified for this with a written exam, but rather, I’m guessing, a retired SpecOps guy, probably doing jobs like this to get money to care better for his family in times of Covid-19.

He sees the finger on the trigger thing and instantly charges the scrawny bully:

You can see that our security guard, entering the picture to the left, has his trigger finger high above the trigger guard, on the barrel of the pistol, as it should be. In a nanosecond he’s acquired the AR-15 with absolutely no one hurt. In the next nanosecond our hero has dumped the magazine out of that AR-15 and un-chambered the next round, always aware of his surroundings at any given nano-second. Absolute Perfection. I love it. It’s what one expects from practiced training. When I saw the twitter videos of this I must say that I laughed out loud. This is the 2nd amendment at its absolute best. Kudos to this guy. I’m impressed. I don’t know if you can see this on WordPress but if you can’t, you can look it up. It’s hilarious.

Just watched a man with a handgun take an assault rifle from a young man on live tv in Seattle #seattleprotest pic.twitter.com/Xm2yCYNxeJ

I’m told by a reader who sent in this story that 911 was called and the AR-15 was given to authorities. The kind reader says: “I’m no expert at all, but it looks *really* professional to me.” Yes, indeed. Our reader continues:

“Same incident from a different angle. Can hear him yelling ‘PUT THE WEAPON DOWN!'”

“I think everyone on that city block knew instantly they were in the presence of someone who had total control over his movements, over his weapon, and over the situation.”

I mentioned to one of our elderly parishioners the other day that I was out of practice, ever since Ammo shot up in price, so to speak, because of Covid-19, and now this. I mentioned that my totally anomalous fluke all-time best for target practice with the drill being (from a serpa locked holster) two to the body (for me a 4 inch by 4 box), and one to the head (for me that being a 3 inch by 3 inch box) on a piece of paper 25 feet away, was 1.01 seconds on a shot timer. I instantly followed that with the admission that I will never get that under one second, what with little ammo round about. But she encouraged me that it’ll all come right back, and I just might break the one second thing. I’m happy for the second amendment these days.

Again, kudos to the guy in the video above. I’m sure he’s got stories to tell.

Forgive me, but I just had to inject a little humor during these weird times.

It’s time to run up to church to offer Holy Mass. I think it might be…

I need lyrics for that last phrase. Anyone?

14 responses to “Deescalating tender snowflake bullies. Humor in the midst of chaos. I laughed.”