Flowers for the Immaculate Conception (Thugs and buffoons, me, you, edition)

These banana lilies, if that’s what they are called, are to be seen at my bank’s night deposit-box. As I say, what I think whenever I see a flower, is that Jesus, through whom all things were made and there is nothing that he didn’t make, created such a flower to give to His good mom, the Immaculate Conception. Of course He did.

How dumb is it for a buffoon to hide behind such lilies so as to commit a crime at the bank’s night deposit box? Is it pretended that God who sees all things does not see a buffoon trying to hide behind flowers He Himself made for own dearest good mom? That hiding, only going up as far as waist-high at most, is less that 21 feet away from the box.

After I mentioned this posturing at the night deposit-box a number of times to the powers that be this kind of hiding has calmed down a bit. :-)

But then there are the thugs who like to hide amidst the flowers on the other side of the night deposit box, which is situated only three feet from the corner of the bank building. These idiots only have to reach a gun around the corner of the building, already literally right at the side view mirror of the vehicle, and then threaten you or just shoot you before you can deposit, say, the church collection for the Saturday Vigil Mass (when it’s dark out). Basically, there is no security lighting. The thugs number even three strong each time. Why? One at the driver side, one instantly on the hood, one on the passenger side. Hmm. I don’t like it.

Not stopping at the night drop-box, I pulled ahead three more feet with the window down, you know, the surprise by which one can get the upper hand. All I had to do was to stare down the thugs just a couple of feet away and it only took seconds. No words exchanged, no actions made. Nothing. Just staring down. They turned tail and left. Soooo typical. Bullies are always cowards. Hiding behind flowers for the Immaculate Conception? I don’t respect that at all. I dare say, neither does Jesus.

Having said all that, I’m happy to run to Jesus’ good mom, the refuge of sinners, refugium peccatorum., you know, under her maternal mantle. Yes. And I’m sure, certain, 100%, that all of those taking refuge there, including the Redemptorist priests and nuns pictured, including me, including you, are all thugs and buffoons, totally. 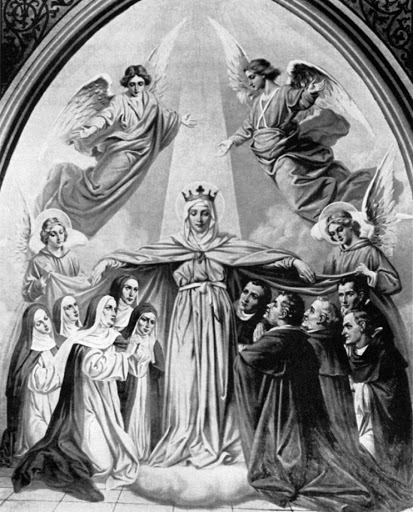 So, flowers for the Immaculate Conception, even yellow Banana Lilies. From this donkey-priest, who is ever the thug and buffoon. Amen.