In the last few days I’ve been hearing much about Fulton Sheen’s take way back in 1948, about Padre Pio’s take way back around 1960, about Our Lady of Fatima and the great apostasy and the one about whom we would have the presentiment that he is the Holy Father (what a strange way of phrasing that description). I call to mind Don Bosco’s vision of the great battle and that the Church would be anchored between the Eucharist and Jesus’ mother (both smashed down today…). And so on and so forth…

My head has been spinning with the in fine velocior events (those untoward happenings which occur at a much faster rate when we arrive to the end), spinning, that is, until, the other day, offering Holy Mass ad orientem, I was terribly distracted, as it were, by another kind of presentiment altogether, that Jesus was very much with me at that Most Holy Sacrifice of His. I know academically and with devotion that the priest acts in Persona Christi, in the Person of Christ, at the Consecrations at Holy Mass, but this was happening just before those Consecrations. My take-away from such an experience, if you will, is – how to say – a deeper impression in my very being that Christ our God is always with us.

I’ve been preaching that mankind is always and everywhere in every culture (or lack thereof) the very same, what with all the weaknesses of original sin, so that it is only political correctness one way or the other in the swinging of a pendulum, from fake-peace to all-out bloodshed, that generally people are faking that they are good people while a fake-peace reigns or that they are good people while they openly commit the bloodshed. There are always a percentage of men who are stably with the Lord Jesus, who see and thank Jesus for those wounds of His, and who therefore admit our fallen condition and are in humble thanksgiving to the Lord right through any times of fake-peace or any times of all-out bloodshed while the ever swinging societal pendulum swings away, and there are always a percentage of men who are violently simmering with their violence just below the surface, who wish they could be more violent in times of fake-peace, and who rejoice when all-out bloodshed is countenanced by political correctness. But Jesus is always, always with us, wherever the pendulum of political correctness happens to be.

At the end of the Apocalypse we read about the attitude we are always to have, through fake-peace and through violence: we are to be crying out with great enthusiasm and insistence, “Come, Lord Jesus! Maranatha! Let’s get this done! Yay! Finally! Let’s bear witness to Jesus! Maranatha! Come Lord Jesus!”

Praying for & then to Paul VI, Sheen, JPII 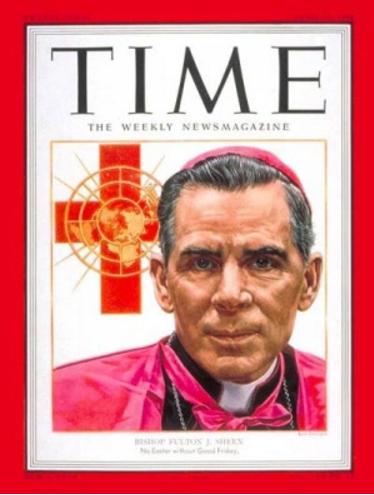 I don’t know how many times – I think eight direct encounters – that I met up with Saint John Paul II. I always felt close to him. When he died – I was there at Saint Peter’s (a story all on its own) – I did the same thing: I prayed a Hail Mary for him, and then offered a Hail Mary in his honor also asking his intercession.

I do feel vindicated against all the haters at the time:

When I heard of the recent nay-saying by certain elements of the US Bishops Conference against the Venerable Fulton Sheen being beatified, my very first thought was this: