Fr Byers: excommunicated heretic? Daring + Paglia to do it. 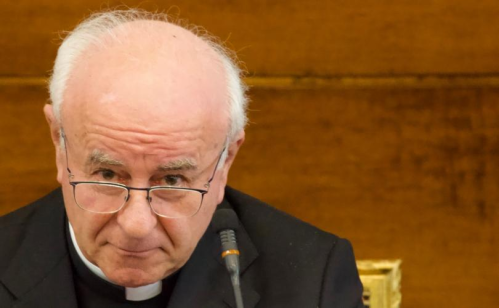 But will + Paglia slit my throat? Pffft. He’s just full of bluster and is a coward and would never do such a thing. He won’t because he knows that if he does, I’ll be able to appeal, which means I’ll be able to defend myself. I happen to have a bit more expertise in these matters, even on a jesuitical level, having degreed out at the Jesuit’s most academic of all their institutions in the world, the Pontifical Biblical Institute in Rome and Jerusalem. I would really enjoy this. I would move to Rome and write a study on this as a response and defense, using all the libraries in Rome, particularly that of the Biblicum. The conclusion of all that will be about the abuse of office of + Paglia throwing around cowardly threats. The conclusion of all that will be about how + Paglia needs to have his heresy and therefore his automatic excommunication declared. Pfft.

But there’s more, much more.

Not that there’s necessarily any connection at all, but I find it striking that + Paglia connects his thoughts about Judas Iscariat being a saint with priests who “accompany” people – holding their hands – people who are in the very act of committing suicide (which accompaniment is scandalous to all involved, sending the wrong message].

To the priest writing this blog, such a connection by + Paglia is stunning because of an incident related to Terri Schiavo [Theresa Marie Schiavo (née Schindler)], who was put to death with the full encouragement of her bishop down in Florida. Remember that? At the time, I sent a message to that Bishop stating the case for Terri and saying that he, the bishop, was clearly a Judas for encouraging her murder. He objected, saying that, after all, he had thought about it. I’m sure Judas also thought about his own part in the murder of Jesus.

I was frantic to save Terri. Having secured cooperation, I had a moral analysis of the case I had worked up before her murder delivered to the moral theologian guy in the Congregation of the Doctrine of the Faith. That analysis was accepted and taken up. But it was too late. Dear Terri was murdered.

For myself, that means I’m on record for such things, and that record in my own file is open, of course, to all prefects, particularly to + Paglia, who would have it front and center when studying assisted suicide, as it would have been sent to his “dicastery” at the time, with comment, and filed under that topic and in my name.

I’ve put myself on the radar with + Paglia much more recently by making comments on his destruction of the Saint John Paul II Institute for Marriage and the Family. See, for instance:

With that remote background, take a gander of these bits of a story on LifeSiteNews worked up by Edward Pentin and reported by Diane Montagna. Read the whole thing there. [my comments]

ROME, December 11, 2019 (LifeSiteNews) — In a statement difficult to reconcile with Scripture and Tradition, Archbishop Vincenzo Paglia, President of the Pontifical Academy for Life, has claimed on behalf of the Catholic Church that anyone who says Judas Iscariot is in hell is a heretic.

In an even more disturbing statement, the Italian archbishop also asserted that a priest may legitimately remain at the beside of someone undergoing assisted suicide in order to “hold their hand” and “accompany” them. […]

Archbishop Paglia, who serves as chancellor of the new John Paul II Institute for Marriage and Family Sciences in Rome (and presided over the former institute’s demolition), said  he […] doesn’t believe that “anyone should ever be abandoned.”

[Speaking out of both sides of his mouth, he said:] “We are against assisted suicide because we do not want to do the dirty work of death [only emotion, then, that we have to heroically overcome? Just. Wow.] and because we are all well aware that, for believers, life goes on,” he continued. [So: “What difference does it make?” That’s frightening. That’s the rationalization of a murderer.] “To accompany and hold the hand of those who are dying” is therefore the “great task“ of every believer [Encouraging murder, participating in murder is the great task of every believer?] he said, along with fighting the culture of assisted suicide, which represents “a great defeat for society.” [But go ahead and encourage and assist suicides? This is like Satan talking.

“We cannot turn [assisted suicide] into a wise choice,” he said. [But it’s a choice that must be respected and accompanied and encouraged and assisted according to + Paglia.]

Archbishop Paglia then clarified: “I always celebrate funerals for those who commit suicide, because suicide is always a question of unfulfilled love. We must also remember that, for the Catholic Church, if someone says that Judas is in hell, he is a heretic.” […] [Copyright 1997-2019 LifeSiteNews.com. All Rights Reserved.]

There’s much more extremely worthwhile commentary on real Catholic doctrine and tradition and the teaching of Sacred Scripture and the Fathers of the Church and the great sainted theologians in that magnificent article of LifeSiteNews. Again, go there and read the whole thing.