There were some years in my life not all that long ago when I was living the Dumpster Life. Not bad eating actually. You have to be discerning, of course, picky. But there really is quite the abundance of good food to eat, sumptuous dining. I mean, if you put it on a fancy plate with some parsley decorations and cloth napkins and didn’t tell the person where it came from… I mean, it’s all in the presentation, right? 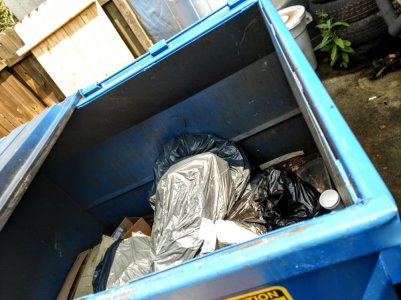 Above is a shot of the dumpster I dove into uncountable times in the same manner as the picture at the top of this post. It’s all about pivoting in such a way that you keep just a bit more body weight outside the dumpster so that you swing right back out. There were a couple of times that I fell in while reaching down just… one… more… inch…

But that was O.K. I can say I did it on purpose because – Hey! – I was officially in charge of the dumpster at the soup kitchen. Back in the day, when there was a bit more mayhem, it might take hours to arrange junk and sweep out and hose down the dumpster area, all necessary health and safety measures for the common good of all. Someone’s got to do it. And – Hey! – then I’m still working for my food, right?

How did I come to the point of “supplementing my diet” (as the guy running the soup kitchen puts it) in this way back in the day do you ask? Good question. I suppose it is a bit unusual for a priest to rejoice in Dumpster Life. If there were a car sticker with “Dumpster Life” the same as “Salt Life” or “Mountain Life” and so on, I might actually put it on Jenny the Jeep that I sometimes used at the time to haul away “compost” from the soup kitchen. “Dumpster Life” would be a badge of honor. And that‘s what some people don’t understand. It’s the ability to understand that separates real people from fake people. How to put it? It’s the ability to understand that “Dumpster Life” might actually be a badge of honor that shows if a person has any depth of character to them or not.

Let me give you an example. Some years ago I was recounting to some seminarians the bad circumstances of someone who had been caught up in a bad traffic accident through no fault of their own, unavoidably, and one seminarian blurted out with some anger and plenty of arrogance that that person was such a loser, as in […] loser. Wooaah… Get it?

We must be in solidarity with people, wherever they are at, so as to bring them all the closer to Jesus. Just to say, Jesus stood in our place while we were yet sinners, and look what happened to Him…. that being the reason why He came, to be in that much solidarity with us. Get it?

Many don’t get it. But I’ll leave that for another post.