Buckeyes & grasshoppers, not what you think: anamnesis of Eden, but first the Holy Sacrifice

This Common Buckeye on the tarmac driveway next to the tomatoes calls to mind Tomato Buckeye Rot. The similarity of the markings is striking.

Imagine that your visual defense against predators is to look like a rotten tomato.

If you’re all nerdy about chemistry amidst a symbiotic ecosystem, the Common Buckeye in its various morphologies opens up a universe of bio-manipulation and applications (see Genesis 1:28). Nature is not ever what we think; there is always so very much more.

Creation speaks of God the Creator. In such times as this (see Romans chapter 1, beginning to end, no, really, go read chapter 1 of Romans now!) it is good to notice the beauty of God’s Creation and be pointed to God, thanking God, praising God.

Meanwhile, at the same time, this grasshopper was on the floor of the open carport. I mean, those eyes…

Anyway, over at Wikipedia we read about what fallen human nature has to be busy about, even with grasshoppers:

So, probably you don’t need to have a helicopter drop a thousand detection-grasshoppers onto this kid. You already know there’s something suspicious when he’s dressed for the arctic in a cover-the-bombs-parka when it’s a hot day. By the way, this 14 year old was successfully stripped of his bombs.

Anyway, this kind of research will surely save lives. Who would’ve thought? Grasshoppers!

There’s always more to learn. Fascinating. Thanks be to God. Love of God makes the thanksgiving exhilerating.

I call to mind the double anamnesis speech of Cardinal Ratzinger to the USCCB in Dallas, TX, in 1991. This is one his most important contributions, right up there with Ad tuendam fidem and then, as Benedict XVI, Summorum Pontificum.

Too bad the bishops didn’t understand a word of what he said, which means that they were already more involved in the second half of chapter one of Romans than the first half of that first chapter. And so we have what we have today.

Basically, you can’t have a remembrance of the pristineness of the Garden of Eden without first of all having a remembrance brought to one’s own living testimony (anamnesis, from which we have the word martyr) of the Last Supper united with Calvary, we being united in solidarity with the wounds of Jesus.

This is essential reading for today: https://www.ewtn.com/catholicism/library/conscience-and-truth-2468

You know you’re getting somewhere when the Holy Ghost has you say, “Abba! Father!” through, with and in Jesus in the Garden of Gethsemane, looking forward to the new Eden, the new paradise, the new “garden” of the new heavens and the new earth in heaven.

Lord Jesus Christ, Son of the Living God, have mercy on me, a wretched sinner who crucified you, and please have mercy on the whole world. You founded your mercy on your justice. Thank you.

Oh. And imagine being hidden with Christ in God, your camouflage being the carrying about the death of Christ within us, you know, as the Master, so the disciple. I think of Saint Paul:

Yes, well. This is how it works: the closer you are to Jesus the more the world doesn’t understand your identity in Jesus, who said that the world will hate us as much as it hates Him. Who we truly are is invisible to the world just as the identity of Jesus as the Son of the Living God was not recognized by the world. Proportional to our ‘in your face’ proclamation, the more hidden with Christ in God we are.

Assumption Chapel where I grew up 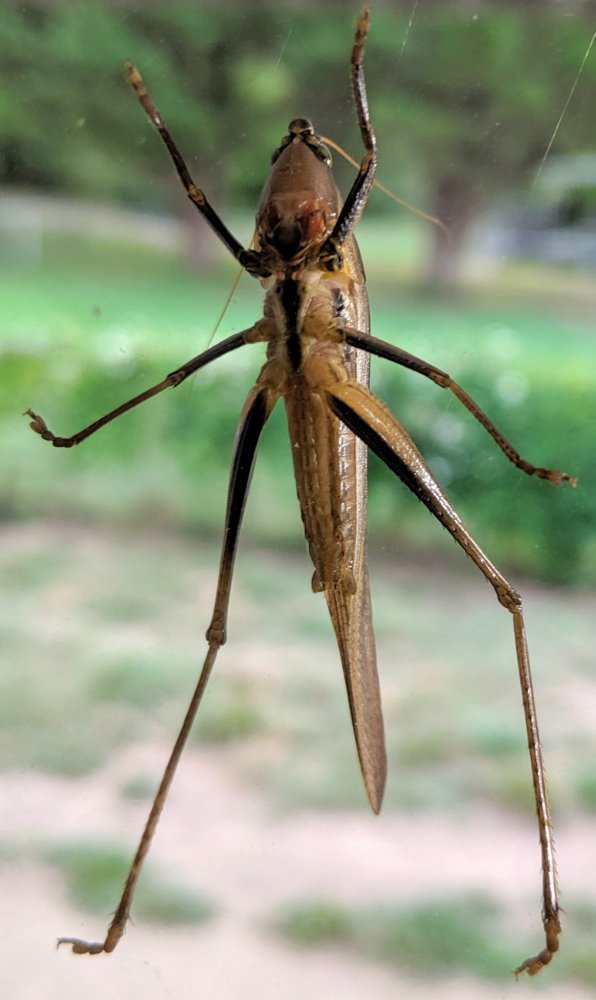 The rectory was visited by a locust the other day. I haven’t seen as healthy and big a grasshopper as this since I was a kid up in Minnesota. It’s twice as big as the biggest that I’ve otherwise seen around here.

Assumption Chapel instantly came to mind. Would we have the faith to do the same today in the plague of faithlessness we are witnessing in the midst of the Church?