“Be the Gray Man” he said. Lessons from Laudie-dog. Just be the idiot, blood red.

Above you’ll see Laudie-dog patrolling the impossible tunnel she’s made through the Jasmine vines, which don’t much offer her concealment while she takes in the situation of the neighborhood. After negotiating otherwise non-navigatable labyrinthine pathways, she shows herself victorious, quite content with herself, as if bragging about her over the top skill sets. Here she is, way down the fenceline in the other direction: 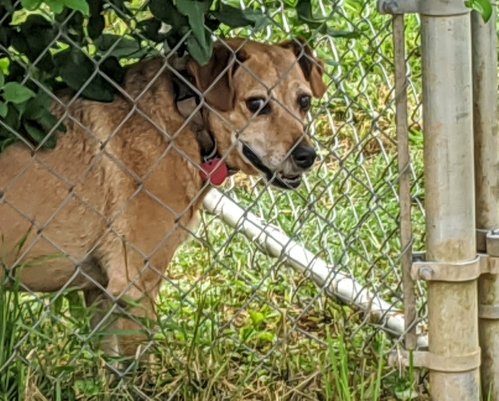 The lesson, if you didn’t quite get it, is about how to be the “Gray Man”, someone who melts into the crowd unnoticed. Most people don’t get this at all. Take note that however much Laudie-dog is low-key, not drawing attention to herself, she doesn’t mind sticking out from her surroundings. I mean, she’s red, right? Take the hint about how to do the Gray Man thing the right way.

UBL (bin Laden, CIA “trained”) and his fellow terrorists were caught for trying too hard to be the Gray Man, you know, using different phones at different locations, never twice the same, so very careful. Not great training there. That was the clue: way too careful, way too gray, way too nothing. That’s tradecraft without common sense. No one does that. Ever.

Much better to be the bumbling idiot, like Laudie-dog is so very cleverly demonstrating above. No smarter dog than she. “Do the Gray Man thing” a friend suggested to me recently. Fine. But no. Yes and no. In my experience, the guy trying way too hard be the Gray Man sticks out in a crowd as if wearing a red jump suit. No, no. I’ll just play the idiot and in that way be the Gray Man… because there is always an entirely dismissable idiot or two in any crowd that everyone overlooks, because… you know… they’re just idiots.

I’m really good at it, because, you know, I have a lot of practice. It’s natural for me to be the idiot. Not being afraid to be the fool can save one’s life. I’ve done it a number of times.

Anecdote which I think I’ve mentioned before. I sometimes go out on a friend’s private back ridge somewhere in the heart of Appalachia here, doing up tactical pistol courses (FBI instructor, pre-2001 Air Marshal course, the SEAL course, and a number of LEO qualification courses for a change-up, etc.). Lots of fun. But three times a visitor came along on the opposite ridge, not so far away, who, not liking the sound of serious tactical pistol courses going on (definitely NOT just some haphazard target practice), decided to have some fun. He could see me out in the open but he was concealed. I wasn’t being the idiot while practicing, right? I was rather overt in some skill sets. I thought I was alone. “He” (I guess a male) sent some rather speedy rifle rounds my way, each of which smashed through even a half-dozen large branches in the forest. No mere AR can do that. And while those came quite close, above and to the two sides (the zoooosh sound the bullets make next to your head is rather unmistakable), he was just looking for me to – I suppose – shoot back, giving him an excuse. Running was impossible. Shooting back was impossible. I sat down right where I was, in the open and played the Hallelujah Chorus of Handel’s Messiah on my little phone speaker. The forest was dead quiet, and so that could actually be heard as if in a sound room even at a distance. I’m such an idiot. Who does that? Only an utterly dismissable idiot would do that. Must be a mistake with who this is, then. All shooting stopped. Each time. I’m such an idiot.

Be the Gray Man. To do it, don’t try too hard. Be the idiot. You’ll be utterly dismissable. I do. And I am dismissable, therefore invisible, gray, therefore still alive.

TO THE POINT: But when it comes to being the Catholic Priest, I don’t play politics. All the truth is proclaimed, always, to everyone, no matter what. If we do that, we’re not the Gray Man. We’re targets. Great. We’re idiots in the eyes of the world in that case, but this time not dismissable. As Saint John Paul II said, there have been more martyrs in this last century than in all the other centuries put together. When it comes to being Catholics, let’s not be afraid to be blood red. Not quite hidden, not quite the Gray Man: