I mean, do you see any connection? The Green New Deal IS the Chinese Communist Party, right? I wonder if “NOW” refers to the National Organization for Women. Just sayin’.

Oh, I forgot, isn’t China the most absolute world’s worst in their arrogance of pumping out carbon emissions? Yeah, I think that would be right.

Always hypocrites, all the time, everywhere, about everything. Styrofoam puppets.

Lemme see. I think I remember a particular medal of dad.

It’s given for the World War II service in…. China. Japan was being slightly aggressive at that time. So, these USA and China were friends at one time, you know, until the Wuhan Virus was sent around the world.

The power grabs and hypocrisy are ever so typical of the ways of the world. In all honor, we can indeed attempt to serve our fellow man right around the world by risking life and limb on behalf of the mercy of justice. John the Baptist gave good advice about proper morality to the occupying military forces of Rome. He didn’t ask them to go AWOL.

And if you’re wondering about Little Boy and Fat Man and the role of my dad in that fiasco with Japan and why we were friends with China, check out what actually ended WW2 in the South Pacific theater. It wasn’t Little Boy and it wasn’t Fat Man:

Someone should do a doctoral thesis on this at, say, West Point, concentrating on the culture of Japan, what McArthur said about the instantaneous surrender of Japan should the Philippines fall from their control, and the whole story of Minoru Wada and George Byers Jr.

If we forget history, it will replay in all of its worst aspects, with players changing sides just to be clever.

For the best of the best to take place, with honor and integrity and honesty and justice and mercy, humble reverence before God Almighty must be rendered.

My best memory of Dad in early 1962, at two years of age, was kneeling with him at Communion time at the granite altar rail with its linins folded over our hands. That was, at that time, in the gorgeous Cathedral of Saint Mary in Saint Cloud, Minnesota.

In America and around the world, we have forgotten that our identity is to be found in God, who so loved the world…

We pray for a return to the faith: Hail Mary…

SGT Henry Felsen USMC: “The flak was so thick…” 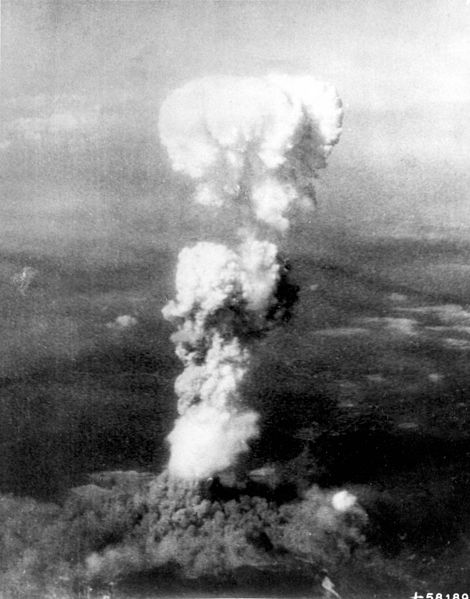 For scale, note the mountainous coastline at the bottom of the picture.

Sure, it was all entirely devastating. But however important Hiroshima and Nagasaki were, I wonder if they were necessarily decisive as everyone says they were. Whatever about any military industry that was there, those two cities were civilian soft targets. Japan could still congratulate itself as to somehow imagine that they were winning, or should be and could be winning in the bigger picture, say, in the Philippines, regardless of losing important battles in the past there as well. Japan did not surrender in the days following the second bomb, and the days would drag on. They would not surrender until August 14, 1945, fully five days after the second bomb with obviously no third bomb falling. I’m guessing there had to be something else to push the decision besides any taunting from the USA.

News would finally come of what might be called a third bomb, that is, what happened in the Philippines on August 10, just one day after the second bomb. This news of a “third bomb”, though nothing nuclear, would have been strategically the end of any hope of victory for the entire war. This “third bomb” did not involve any massive battle and was not hard fought. It was ridiculously insignificant compared to Little Boy and Fat Man. But what the USMC had done in the Philippines on August 10, 1945, heralded the end of Japanese aggression in the Philippines and decisively ended any possible hope of their continuing with their aggression. When they heard the news, they would have to surrender, and they did.

So, what is it that happened in the Philippines? Glad you asked. It’s a story in pictures. Here’s an original newspaper story that my dad had specially framed up. You can find others copies online. This is the actual newspaper:

Sometime before the dropping of Little Boy and Fat Man, the Imperial Japanese Army Officer Lieutenant Minoru Wada was captured by the USMC on Mindanao of the Philippines. He’s an American born Japanese fellow, who, as was the practice at the time, grew up and went to school in Japan. He was American, but was taken into the Japanese Army as the Japanese aggression began. He betrayed Japan, although with the best of intentions, so as to lower casualties in Japan by ending all hope for Japanese victory in the Philippines, and thus ending all hope for Japan to be victorious in their overall war of aggression, forcing their immediate surrender. Army General Douglas MacArthur had long stated that the Philippines were absolutely strategically necessary for Japan.

Minoru Wada might well have been told of the intransigence of Japan in the face of Little Boy and then, as the mission dependent on his betrayal was being readied, he might have well been told of the dropping of Fat Man without any reaction from Japan. The pressure must have set him to shaking quite literally. This betrayal, surely saving even millions of lives, would bring Japan to give up. This was not a betrayal then, at all. He did the right thing for humanity. There was zero loss of life on the American side. All they did was to take out the well hidden headquarters of the Imperial Japanese 100th Division and their communications center, ending effective Japanese military action. Four days later, Japan did indeed surrender.

Now, I suppose I’ll get blasted for saying such an outlandish thing. The events of Little Boy and Fat Man over against this little operation in Mindanao are incomparable. Yes, but the Japanese military machine seemed to be calling the “bluff”, if you will, of two bombs so different from each other and therefore likely being unique in production and not at all exemplars for an unlimited supply of similar nuclear bombs. The arguments among the top brass must have been intense, with anything else that might happen being that which would lead them to surrender. They were risking so very much. The loss of the effective control of the Philippines was simply too much to bear in the wake of Little Boy and Fat Man.

Odd thing about Minoru Wada, he had worked closely with my dad, George Byers Jr, who was flying for the USMC VMB 611 at the time in the Philippines, on Mindanao. My dad is to be seen in the upper left of the bottom group of four pictures in the newspaper story above. In that picture he is the one in the lower right (the back of his head, but unmistakable to me, his son!). Dad totally respected integrity and honesty, and what he saw in Minoru Wada would have captured his imagination. He put the original photos of Minoru Wada in frames and hung them up around the house, including the original newspaper story (the actual newspaper). Dad pointed out to me as a little kid the bomber with the “stick” of bombs falling. So, I gotta wonder who the pilot of that particular PBJ-1 seen out the window is. These pictures are from our family home back in the day… 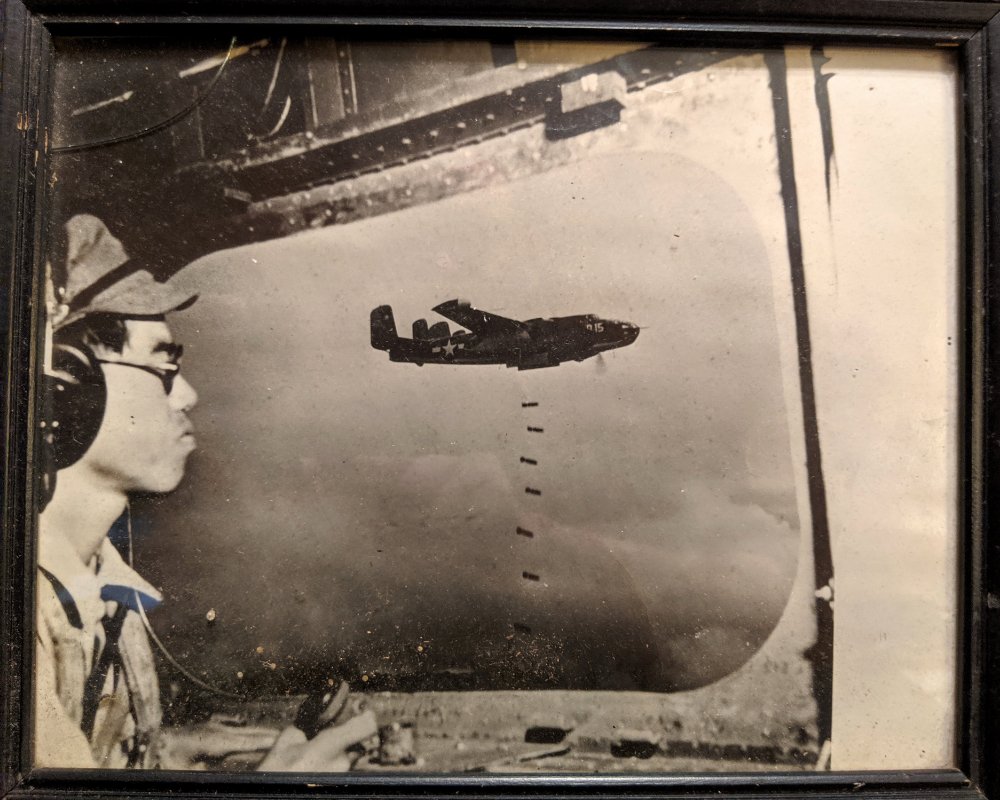 Dad was just 21 years old in 1945. Here’s a picture of him with the typical aircraft of the VMB 611, that is, the North American PBJ-1 (either “D” or, probably “J”) medium bomber airplane which sported twelve to thirteen .50 caliber machine guns, and carried bombs, depth charges, 5-inch rockets, or an aerial torpedo:

Placing him in the Philippines at the time is a citation he received for an Air Medal. I only just happened to get this just the other day. Yikes!

And the Air Medal with the numeral 5 for that citation:

The Air Medal for numbers of missions surprises me. I’m guessing he’s done hundreds over the many years. Antiaircraft fire is nasty for sure. He’s becoming a decorated member of his squadron at the same time as Minoru Wada is captured and brought on side. I’m sure dad’s meeting up with Minoru Wada was very formative of his own character for the rest of his time in the military, which was to be a long time indeed. Minoru Wada’s name was changed for him. It is unknown if he is still alive. If he is, I would like to thank him for what he did.

One of the last things VMB 611 did was to accompany (for navigation purposes) F4U Corsairs to Shanghai, China. The VMB 611 was shutting down, and dad joined up with the occupying forces in China (getting another medal for that), and then went on to head up the Checkerboard squadron in Japan and Korea, with the medals piling up as he went along.

The abundance of medals, I’m told, is most extraordinary, as in those later years the flow of medals slowed down to almost nothing.

What have I learned from dad? Just be faithful to what you need to do in the circumstances right before you, step by step. Just do it. Do it fiercely. No apologies. No compromise. Ever.

This is never easy. But do it. Not everyone is given over to doing things right. The VMB 611 had an extremely rocky start. Horrible. Like hell. It seems with people doing what they shouldn’t be doing. Putting hundreds of our own at risk. Horrible. Horrible. I’m hoping my dad missed all that. I don’t know. Finally they got established, did what they needed to do – thanks Minoru – thanks dad – lots of great crew and pilots – and just that quick they were disbanded. Take the opportunity to be faithful while you have it. In this case, they were there to do a simple flight that would assist Japan to surrender forthwith, saving millions of lives. And I’m sure that was by far the easiest flight any of them had ever done in their careers. Easy or difficult doesn’t matter. Just be faithful. Always. Do it fiercely. No apologies. No compromise. Ever.