Homily: Fasting because your heart is ripped out in solidarity with Jesus and His mother

The first flowers for the Immaculate Conception are appearing at the coldest part of February here in the northern hemisphere. Don’t be fooled by the grass, as it seems that may have a layer of ice over it very soon.

These are purple flowers, closed for now, in protection mode, wanting to be ready this Ash Wednesday, bursting forth in their royal purple apparel so as to honor the Divine Son of the Living God who was mocked by King Herod, who put his own cloak over Jesus to send back to Pontius Pilate. I bet that’s one of the sources of Pilate wanting to write “Jesus of Nazareth King of the Jews” over the cross upon which the crucifixion took place. After all, we read in the Gospels that it was that day that Herod and Pilate became friends. It was with this that the Chief Priests proclaimed to God that they have no king but Caesar, effectively a death sentence for Jesus, you know, because He was good and kind, because He is Living Truth.

So, the beginning of Lent. Are you in protection mode over against sin? Confession is the best way. Regular Confession.

Lenten Transfiguration of Jesus. Arise! Let us be going!

The reward of having fun during Lent

So, what’s that reward? Why, the reward is growing in friendship with Jesus. And that’s a true joy.

When we come to know a bit of humble thanksgiving before Jesus, having learned and grown in His friendship, we cannot but rejoice, even in the midst of all the hell of this world that we get to know better through our ineptitude in fasting, prayer and almsgiving. Our heavenly Father so loved us as to send Jesus to us. How outrageous wonderful that we are to be rewarded when Jesus does everything. Our reward is to realize that He is our Savior, our Friend, Christ our God, that He is the One, the only One.

Might it seem that THE LION, the Lion of the Tribe of Judah, is asleep while we – oooh! – suffer so much in our fasting, prayer and almsgiving? Sure. But know this, He is the One doing battle for us, providing us with friendship inasmuch as we, in His grace, are humble enough to receive it. Then we realize that He has been the One doing battle the whole time over against Satan, and that He, Jesus, is the last one standing, and we with Him. Do you dare to become closer friends with Jesus this Lent in prayer, fasting and almsgiving? What I mean is… this Jesus, the great Lion of the Tribe of Judah:

The total sum of fasting, prayer and almsgiving is to GO TO CONFESSION! 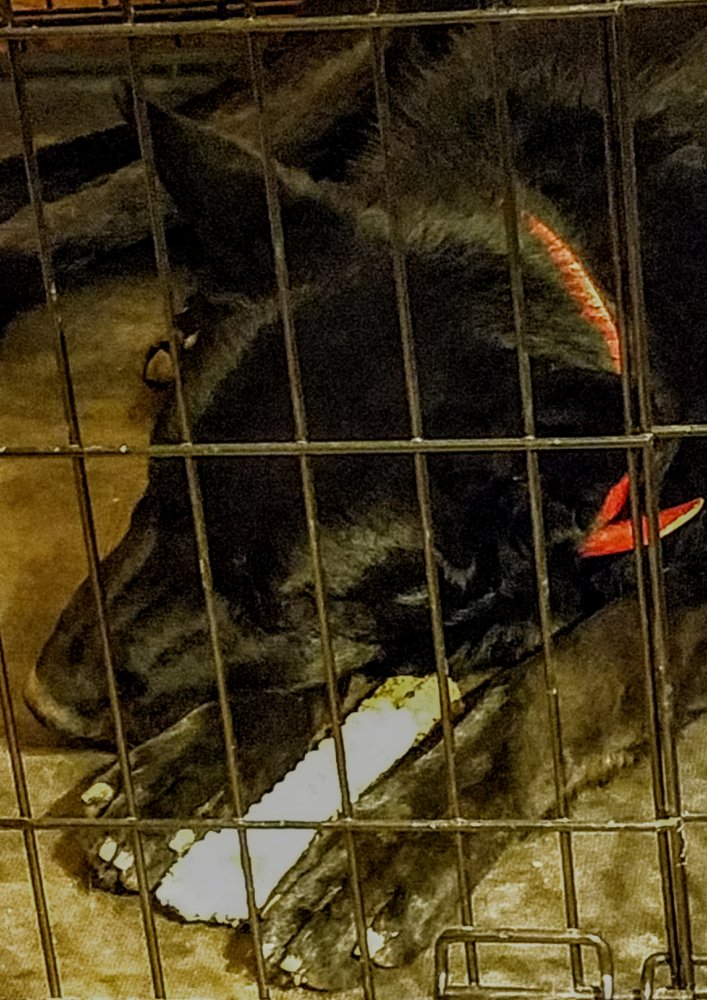 Here’s dark as the dark of night Shadow sleeping away, content that he’s worn down his nylabone at least just a little bit. It’s a work in progress. Shadow is a friend. Other shadows can be friends.

Lent, of course, has a bit of penance to it. Today’s Ash Wednesday, with both fasting and abstinence for those who aren’t too young or too old. There is also almsgiving, of course, and prayer, of course. Right?

All three of those would have us get glazed eyes, ending up in darkness, not knowing what we are doing if we are doing it right, that is, not so as to congratulate ourselves but for the sake of friendship with Jesus. We, of ourselves, don’t like to fast, give alms or pray.

So, if it’s all about Jesus while we get to know what idiots we are when we are fasting, or almsgiving or praying, and we call out to Jesus in the darkness, that will be an occasion with which we are, in that grace, available for the grace of being brought closer to Jesus in greater friendship.

Lent is all about occasions of friendship with Jesus.

During this Lent, it is the Purple Finch which abounds at the bird feeder out front of the rectory. Purple is penitential by way of remembering how the color purple was used against our Lord. Purple dye was extremely rare, extremely expensive, obtained only from certain mollusks up near Lebanon in the days when our Lord walked this earth, and therefore affordable only by kings. Remember when violent Herod clothed our Lord in a purple robe and sent Him back to Pontius Pilate?

Embrace purple. Carry with you the weight of the glory of God as He is mocked and ridiculed and scorned and sent to His torture and death, He, the King of kings, the Lord of lords, the Prince of the Most Profound Peace. Do that, and be free as a bird.

On Shrove Tuesday Eve, there was party thrown by some friends celebrating some recent events in my life, which happened to happen all at once. It was a victory celebration in many ways.

This massively huge “tree” was just outside the window. I think it’s an Ent, you know, of Lord of the Rings fame, those gigantic creatures which ever so kindly carried our heroes into the battle of battles.

Hey! Why not personify the cross into being a friend, a best friend, who will carry you right into the battle of battles next to the King of kings, the Lord of lords, Wonder Counselor, Prince of the Most Profound Peace? That would make for an ENT LENT!

In this way, pareidolia is a gift making life more interesting even while personifying that which is able to be personified is altogether helpful for analogy, without which Christianity is naught.

Take as an example the great “Sophia”, the Wisdom of God spoken about in the Old Testament, not a goddess or fourth member of the Most Holy Trinity, but that receptivity of Sacred Tradition which Cardinal Siri in his great work “Gethsemane” called univocal, the same for all who correctly perceive that which comes to us unchanged by way of the Holy Spirit and which is only passed down by the Church quasi per manus, almost as if by hand (for it is done by the Holy Spirit), as we read in the glorious first decree of the fourth session of the sacrosanct Council of Trent on 8 April 1546.

Diversely, directed Rorschach projection is just so boring. You’re not allowed not to see anything but the very thing the examiner wants you to see, delegitimizing, of course, their attempts to figure out their place in the universe with their willing guinea-pigs. The various categories of answers, and put to statistics, even with conversational follow-up, cannot but skew results. Much better just the unrepeatable circumstances with conversational follow up. Pigeonholing simply makes for a quick and easy diagnosis with generalized statements at which one throws money. Anyway, I never did this. I would, however, discuss at length methodology with the psych students at the Gregorian.

At any rate, don’t hug a tree. Instead, accompany Ents stomping on untowardness:

Tagged as Ents, Lent, Lord of the Rings, Spiritual life