McCarrick and Jackass for the Hour. I can hardly believe it.

As longtime readers know, I’ve been struggling with what to do with the original Jackass for the Hour as it seemed a bit dated with such an unexpected papacy such as we have with Pope Francis. I thought of ditching it altogether in favor of something along the lines of a post-Francis age, if that will be possible in our lifetimes. Here’s the original cover with my original pen-name, which I later abandoned.

But then, this whole McCarrick fiasco. Here’s the deal: I knew the players, right to the top. I am stunned. Unbelievable. But armed with the “report” and adjunct reports, all I have to do is add another story line and change a few details of some scenarios to accommodate this new information. I mean, the whole framework of faithlessness on the one hand is already there. And the story lines of faithfulness are already there as well. As far as what I wanted to do with the next papacy, that framework is already in the tightly scripted pages as well. I wish I had the time to write. 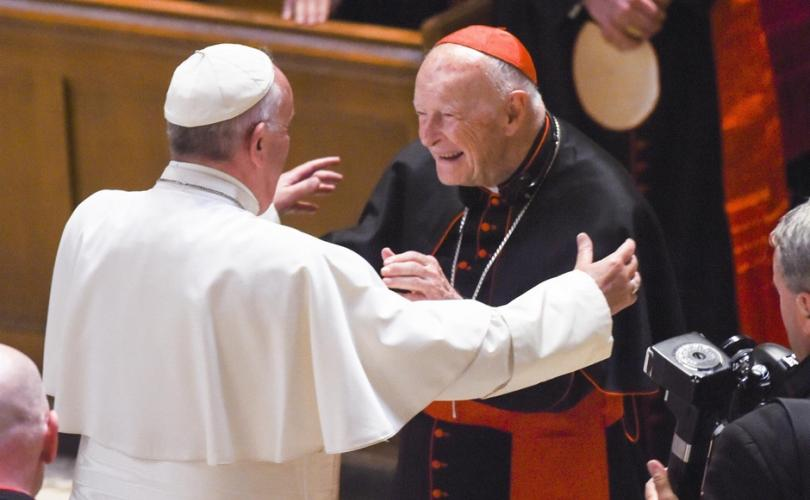 McCarrick was put down January 11. He appealed. At a “Feria Quarta” meeting of the members of the Congregation for the Doctrine of the Faith after this appeal the appeal was rejected. That decision was ratified by Pope Francis the next day and this has now been publicized.

What we must do is to bring greater honor and glory to God, which is to make flourish as much as we can the saving grace of our Lord and Savior Jesus Christ, who, stunningly, loved us all while we were yet sinners. Some accept this grace. Some reject this grace.

While we breathe we must have hope for all, as that is what most respects what our Lord has done for us all. Having hope for all on earth is not at all in any way the same as having hope that all are saved. Instead, having hope for all who are still alive on this earth is to say that we have doubt for the salvation of anyone, but, for our Lord who redeemed all, we must desire that as many as will allow themselves to be saved by God’s grace will in fact be saved. And that does us a world of good, an eternity of good.

The angels made the delivery to Pope Francis of what I call “The Package” possible back in September 2018. The deposition then came about in December. Three weeks later the decree in January, then the appeal, then the rejection, then the ratification, then the public decree in February 2019. Absolutely everything instantaneously fell into place beautifully. The angels made it happen. I’m guessing that since the delivery of that package and the laicization this represents possibly a turnaround time for such an action over against a [Cardinal] Archbishop the fastest in the history of the Church. As far as I know, he’s also the most senior member of the hierarchy to be laicized ever.

I see that Christine Niles and Michael Voris over at Church Militant have put up a presentation on one of those affected by McCarrick. He testified under oath to a Canon Lawyer, a Judicial Vicar, directly appointed by Pope Francis to receive testimony on McCarrick. That was Thursday, December 21, 2018. The next day, Friday, December 22, 2018, the last day to receive testimony under oath, a priest gave testimony. The latter’s case comprises one of the “packages” I brought over to Pope Francis. That communication was cited three times and presented to the priest witness who answered as to the veracity of each statement and signed each individual statement. The Debriefer said that within days he would personally deliver this to Pope Francis. I’m guessing that’s now happened in the last couple of days.

You’ll notice that, in all this, the Apostolic Nunciature in Washington DC, the Congregation for the Doctrine of the Faith, the Congregation for Bishops, the Congregation for Clergy, the Secretariat of State and even the Pontifical Family have been rather unceremoniously left out of the loop when it comes to delivery of these major communications. As I myself was told when I went over, this kind of thing would otherwise never reach the Holy Father.

Readers are urged to pray for a successful continuation of this investigation. We recall that this is still December, some six weeks before the extraordinary synod on abuse that is to convene in February 2019.

Suggestion to Pope Francis: Have special investigators compare files at the Nunciature in Washington DC and the mirrored files in the various dicasteries in the Roman Curia (not leaving out the Congregation for Religious) about candidates for the episcopacy. If the files have been tampered with on the D.C. side before being sent (easy to spot from what we now know), or if what was sent from D.C. to Rome is different compared to what is now in the files of the Roman Curia (meaning that these files were tampered with in Rome to promote some candidates over others), then it will blow the whole “lavender mafia” thing wide open. And we’ll know who’s who, even today, as some players are still in the game, even for the February synod. Jesus’ Church has no room for a mafia, does it? There are only some names with which to start, those mentioned, for instance, by Archbishop Viganò.

I still wish I could speak with the Archbishop, as there is much, much more to do, and it help me to have a wee chat with him before doing that.

Today, Friday, at 11:00 AM, the central witness, by far the most important witness against McCarrick, proffered testimony to the Debriefer appointed by Pope Francis to take sworn testimony about McCarrick. Mind you, this is still December, before the February Synod.

The testimony of this witness backs up Archbishop Viganò’s testimony.

This central witness’ case is one of the ‘packages’ which I brought across the pond to give Pope Francis. This is part of the result of that trip.

This goes to the heart of the matter. Prayers, please, for a good continuation of the progress being made.

This was a great day for the Church and the world. Truly.

Viganò’s extra-judicial trial of Francis. Ending abuse of power with the same?

Archbishop Viganò has published a second letter. LifeSite has a PDF, Scio cui credidi. In it, he describes the dynamic of what is going on:

“The pope’s unwillingness to respond to my charges and his deafness to the appeals by the faithful for accountability are hardly consistent with his calls for transparency and bridge building.”

Sure. That’s right. Almost 100%. But there’s one little bit that’s wrong in which one forgets the old maxim:

The presentation of Archbishop Viganò is almost 100%, but doesn’t quite make it all the way. So, what do we actually have here?

This is actually a final judgment rendered in an extra-judicial trial conducted by Archbishop Viganò over against the one who is called the Supreme Pontiff for a reason. The Bishop of Rome cannot legitimately be tried in an ecclesiastical court with or without the trappings of ecclesiastical fanfare, by Council or not. Saying something, whatever, and then demanding an answer is no way to go about things with the Pope. Making an accusation and being met by silence doesn’t always mean that one consents, the old Qui tacet, tacet consentire (the one who keeps silence, keeps silence in order to consent).

If one puts this kind of pressure on the Holy Father, there is all of a sudden something much bigger at play. It is a utilitarian usage of abuse (an insult to real victims) in order to bring about another agenda, the downfall not of a particular bishop of Rome, but the downfall of the papacy itself, the downfall of the Catholic Church. It’s all about power. It always is. Abuse of power is always ugly. It’s the old taunting “Nyeah nyeah nyeah nyeah nyeah.” That’s NOT to say that there isn’t something to the charges. It’s the way of bringing items to the Holy Father that really does count.

Long time readers will know that I myself brought a couple of matters to the attention of the Holy Father quietly, without publicizing what those two matters were other than to say that one deals with the Holy See and the other with the McCarrick affair. There was a response, an awesome response, as I have reported. Anyway…

“But it’s all about the children!” splutter the self-righteous abuse of power mongers. No, it’s not about the children, except to make a utilitarian usage of them, again. That’s offensive. There are other ways.

I’ll make you a bet:

Don’t get me wrong:

I’m all for helping the Holy Father discern all that which is good and holy. I’ve done that with Benedict XVI. I’ve done that with Francis. Let me slightly edit Saint Paul’s words to the Ephesians (3:14-21), replacing “you” with “the Pope” so as to let you know my wishes for Pope Francis:

“I kneel before the Father, from whom every family in heaven and on earth is named, that he may grant [the Pope] in accord with the riches of his glory to be strengthened with power through his Spirit in the inner self, and that Christ may dwell in [the Pope’s] heart[-] through faith; that [the Pope], rooted and grounded in love, may have strength to comprehend with all the holy ones what is the breadth and length and height and depth, and to know the love of Christ that surpasses knowledge, so that [the Pope] may be filled with all the fullness of God. Now to him who is able to accomplish far more than all we ask or imagine, by the power at work within us, to him be glory in the church and in Christ Jesus to all generations, forever and ever. Amen.”

What surprises me is the almost non-existent theology regarding the papacy even by those who claim to be theologians, and orthodox to boot. Almost no one knows what Infallibility is about, what it’s consequences are. The extra-judicial judgment thing is just one more sign of ignorance as to what being the Bishop of Rome is all about.