Priest kicked out, psych treatment required: he said the new Mass in Latin

See link in video show notes for full story. What follows are a few snippets and then some comments.

Fr. Sixto Eduardo Varela Santamaría has been suspended by the Bishop of the Diocese of Alajuela in Costa Rica after the priest said Mass in the Ordinary Form in Latin and ad orientem. at his parish of St. Peter the Patriarch – ACI Prensa

ACI Prensa, the Spanish sister news agency of CNA, confirmed that the Diocese of Alajuela, in the Northern region of Costa Rica, ordered Fr. Sixto Eduardo Varela Santamaría to be suspended from all ministries for six months, and will be sent to a psychological treatment clinic for celebrating in Latin the Mass of the Missal of Pope Paul VI, also known as the Ordinary Form or “Novus Ordo.”

[… Even though Father Sixto said a Novus Ordo Mass] “Bishop Buigues Oller gave as a truly confusing reason [for punishing Father Sixto, because,]: according to him, the only way we could keep celebrating the Traditional Latin Mass was for us to either be in existence before 1970 or to be related to the schismatic Society of St. Pius the X (SSPX,) something that is not mentioned either by Summorum Pontificum or Traditiones Custodes,” the association told ACI Prensa.

[…] “Fr. Varela Santamaría revealed that he has temporarily been sent to his sister’s home, and that the diocese will send him to a retreat house/clinic that will provide him, “spiritual, psychological and medical attention, at least according to the website of this place.”

This is where we are headed. Can the bishops be that insanely ignorant? I doubt it. But — hey! — we’re to think the best of others, right? I guess we have a lot of insanely ignorant bishops. Meanwhile, Jesus’ own priests are effectively getting their throats slit.

Here’s the deal: When young seminarian Joseph Ratzinger was in moral theology class in Germany, a fellow seminarian stood up and asserted that Hitler would surely go to heaven if only he had an erroneous conscience, you know, because he might have had feelings that he was, like, sincere. Later, Ratzinger recounted it was at that exact moment that he realized that erroneous conscience doesn’t save. Jesus saves.

In all the hell of chaos we’re experiencing the One whom we don’t hear about is Jesus. How is it that the bishops don’t know that Christ our God, Divine Son of the Immaculate Conception, will come to judge the living and the dead and the world by fire? It’s all hush hush about the Living Truth, hush hush about proper doctrine and morality. How is it that NOT telling the Living Truth with honesty and integrity and enthusiasm and joy and charity is best way forward?

“Silence that Jesus!” Is that the way it is? I thought we were to help each other get to heaven, even to correct and admonish out of love for one another, putting no one on a pedestal, making no one beyond reach of being helped, you know, out of human respect, so that we all just go to hell together. I want to help others get to heaven so as to get there myself. That includes Pope Francis and the bishops. To leave anyone out, so that we can continue under the radar and just do our own thing, is to condemn others and oneself. If the only way to continue is to compromise one’s priesthood so as to remain a priest, one will never be a priest for anyone.

Here’s something to ponder, because if it’s in the Scriptures, it’s because it is absolutely relevant in every culture of every time and every place, for all from every tribe, tongue, people and nation:

Yep. That’s the way it is. Surely all in the Sanhedrin were exclaiming to themselves that they had nice feelings about their erroneous consciences. Surely they were all on their way to heaven while exclaiming the damnation of the Apostles and of Jesus. Some things just don’t change.

Bishops today are furious, limiting the ministry of priests who speak about Jesus, who speak about good doctrine, good morality. “You’re telling everyone about Jesus!” is actually an accusation these days, as always: “People might notice, and to “have that kind of thing going on is unacceptable!”

And that means that we have the opportunity to count it a privilege to be mistreated for the sake of the Name, the Holy Name of Jesus, for upholding the Most Holy Trinity, God, before whom there is no other god, no damned Pachamama, no demons, no narcissistic human beings holding themselves to be gods.

Count it a joy. And this is true joy.

Preaching about the Lamb of God 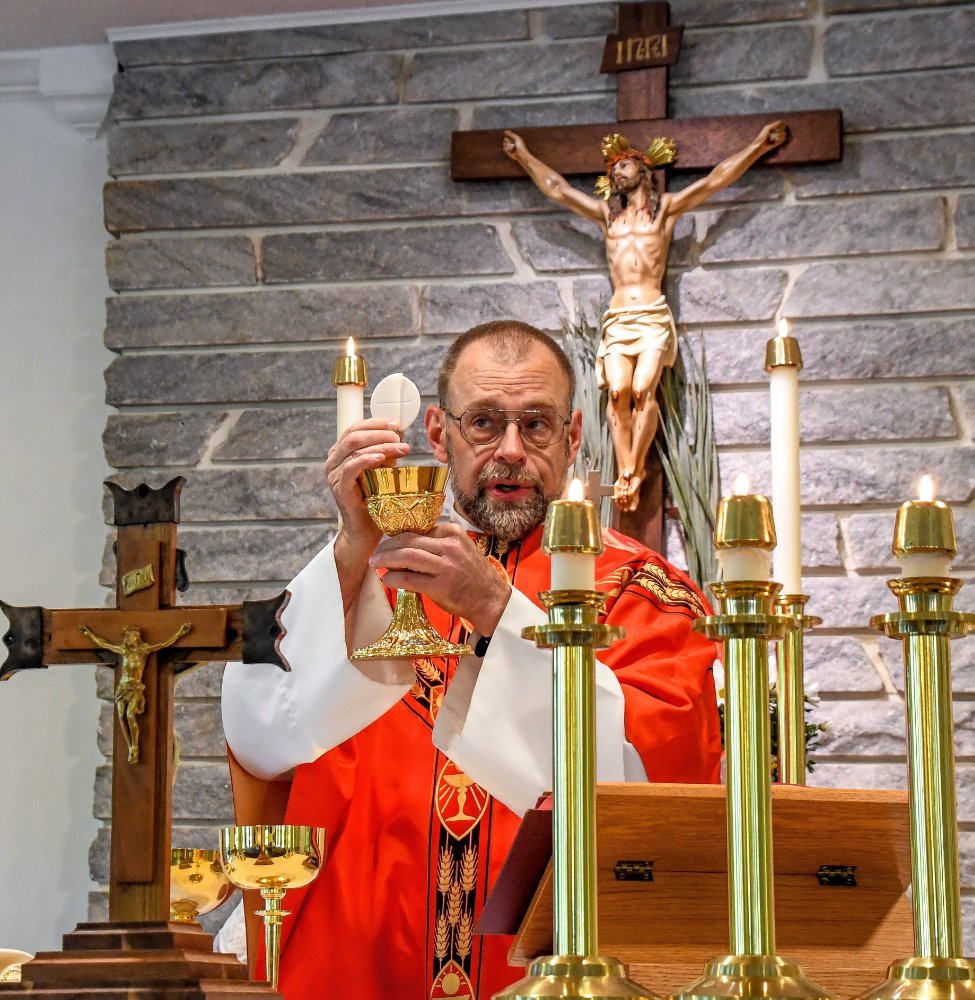 Pictures herein are from Pentecost 2020, by “Photo Phil”. Thanks, Phil. Is the picture above depicting that which is ad orientem? But that’s a topic for a book or five. This post is dedicated to preaching about the Lamb of God. The picture above is what you will see with any priest at the Ecce Agnus Dei, at the Behold! The Lamb of God! Regardless of any versus populum or ad orientem logistics during Holy Mass, both in the Traditional Mass and in the Novus Ordo the priest is directed to be facing the people while holding up Jesus in the Most Blessed Sacrament, saying: Ecce Agnus Dei! Behold the Lamb of God! That is, of course, the exclamation of the greatest of all the prophets, Saint John the Baptist, as he pointed us all to Jesus, the Lamb of God who takes away the sins of the world.

There has been much confusion even among the elite academic liturgists regarding terminology and purpose of preaching the Lamb of God after the Gospel.

Some condemn preaching as that which has N-O-T-H-I-N-G to do with Holy Mass. After all, they say, the priest of old would take off his maniple and chasuble after reading the Gospel, signifying that what he was about to do had nothing to do with the Holy Sacrifice of the Mass. Then, they say, the priest would make the sign of the cross before and after his sermon to seal off absolutely that what was to happen had N-O-T-H-I-N-G to do with Holy Mass. Sigh. As if the Sign of the Cross has nothing to do with the Holy Sacrifice of the Mass?! They say that there is never to be anything didactic (a big word!) So, what is it to be? Fake “pious piffle”, a waste of time? I don’t get that. Anything to do with the Living Truth, He who laid down His life for us during the Last Supper united with Calvary, is instruction, leading us to fall on our knees in reverence before the Son of the Living God in the Most Blessed Sacrament at His very Sacrifice for us: Corpus Domini nostri Iesu Christi custodiat animam tuam in vitam aeternam or words to that effect as I type this as fast as such prestidigitations can proceed upon my keyboard.

The purpose of what is said after the Gospel is to put everyone on their knees. Does it teach, instruct, admonish, remind people to repent (in the Confessional), and be in humble thanksgiving before Christ Jesus, Son if the Immaculate Conception? Yes, it should, every time.

But what really is that straw man you bring up talking about, Father George? I thought the most traditional thing was – after the Council of Trent, after promulgating the Catechism of the Council of Trent – to preach sermons on a preaching schedule, so that all parts of said catechism were covered successively throughout the year? Yes, well, that would be right of course. All very didactic indeed. But, I would argue that that’s just fine and dandy and needed and I wish more would do this instead of the blather they go on about. But I would also argue that those doing that even back in the day would have enough pastoral solicitude during the Holy Sacrifice of the Mass to use whatever truth of salvation in the catechism there happens to be, to use that to bring ever so didactically all listeners to fall to their knees before Jesus, the Living Truth, at the Holy Sacrifice of the Mass.

Yours truly loves to preach, and I’m never at a loss for words, or so I’m told, many times! ;-) I’m not going to apologize for it. I think preaching is a blast. I love it. I absolutely love it. I love being a priest. I love didactically bringing people to fall on their knees before the Son of the Living God, Jesus Christ our Lord, Divine Son of the Immaculate Conception.

I’m guessing those pictures by Photo Phil might tell the story. Although some posts on this blog might be serious about serious issues, I gotta tell you, this is one happy priest. And… and… I’m happy to bless everyone present, just below the great Saint Joseph.

We need vocations who are in fact being called by our Lord all the time to accept their vocations with enthusiasm, with trepidation, with joy, with a desire to lead people, even if didactically, to our Lord.

By the way, I challenge anyone anywhere at anytime to go ahead and point out to me any preaching of our Lord Jesus which was not didactic. Heh heh heh.

Also, and just to say, I’ve almost never heard preaching from the ultras of either “side” anything that would not be purely academic on the one hand or purely political on the other hand. But in this diocese, I’ve often heard preaching that didactically leads people to fall to their knees before the Living God as the priest holds up the Lamb of God who takes away the sins of the world. We have lots of great priests here in the Diocese of Charlotte. They know who the real priest is: 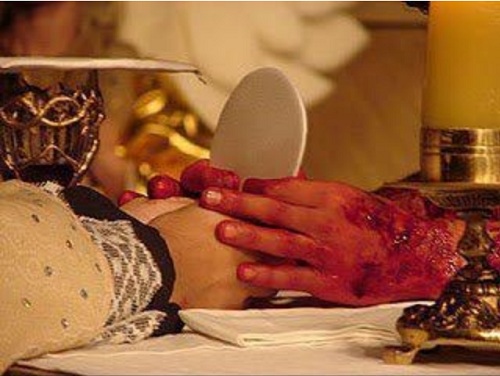