Cardinal sins and me: “You’re so vain!” 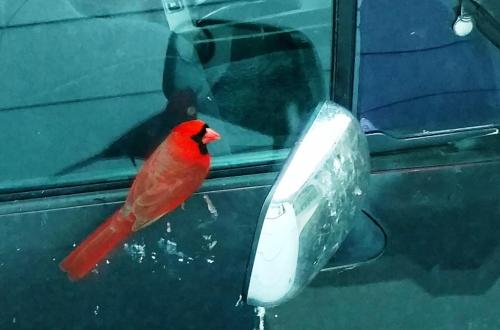 Anything “cardinal” is about the hinge effect (cardo=hinge), something on which other things turn. A cardinal sin spins off so many other sins.

Perhaps you suspect that I am upset with this fellow. The sin of the cardinal or red-bird (toxaway in the local language of WNC) pictured above is not what you might think it is, however. It’s not that he’s vain, looking in the mirror 24/7/365, nor that he’s pooping all over my vehicle, nor even that he’s overly aggressive in attacking his rival in the mirror, nor that he’s surely cracking his beak and giving himself a headache and causing himself spinal injuries so that he will disable himself and won’t be helpful in feeding the young ones in the nest. The sin is that he’s showing me what a bad auto mechanic I am by ripping off my perfectly good gorilla tape (this is almost impossible for a human, much less for a little bird) which holds the windshield frame on, which holds the windshield on, more or less, and thus holds the cab on to the truck and holds the truck together. Here he is, arranging a little piece in his beak before taking off to show his prize for nest strength to his nesting spouse: 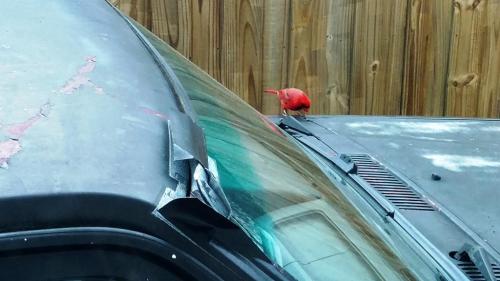 And then, just to rub it in, after he does that, he sings about it! The gall! The nerve! I mean, look at that top-near-corner of the windshield. It was fine all this time until he, my enemy, my nemesis, the destroyer of my one good vehicle, has appeared. What to do? I think I firstly need to give him a name. We are so afraid to name our enemies these days, you know, like ISIS and such as that. We are our own worst enemies. But in escaping that latter discussion of ourselves being our own worst enemies, I’ll just project all my troubles onto him and accuse him of everything horrible and evil. I suppose I could just call him the Red Terrorist, but that’s more of a title. I need a name, you know, to make it personal. Any suggestions? Any mythic demon from the underworld? And galactic satan from the meta-beyonds?

P.S. Pope Francis vehicles allow you to have some fun like this. ;-) Sometimes I think I have too much fun. This is a benefit of being utterly convinced at each moment that we can be ever so easily catastrophic disastrous victims of cardinal sins if we are without friendship with the Most High God of the heavens and the earth and all that is in them; He has us in the palm of His hand; He has us look to Him in rejoicing.

Oh, and, by the way, the local mechanic shop said they’ll try to attempt to bring Betsy the Nissan Pickup back to life first thing Monday morning. Resurrection in Holy Week!

Did you know that Mary’s Baby Boy is the great “I AM”? 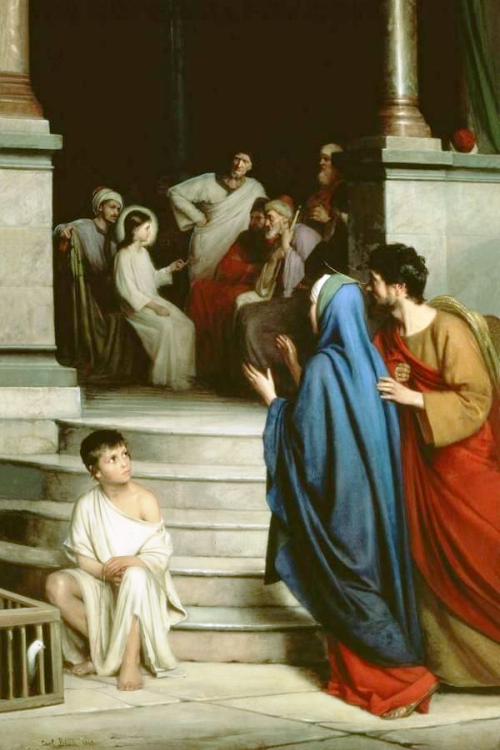 Firstly, the painting: This is the Finding of Christ in the Temple by Carl Heinrich Bloch (†1890) of the Royal Danish Academy of Fine Arts. “Read,” if you will, about the moment Mary sees Jesus by reading the expression of the already bar-mitzvahed boy sitting on the steps of the temple. That boy sees her anguish, and that she’s the mother of Jesus who’s busy with his own bar-mitzvah. The boy on the steps is already running his own business of selling “a pair of turtle doves or two young pigeons” (Luke 2:24). He has rope in hand, ready to tie up the feet of his captives to hand over in a bundle to anyone buying them for the sacrifice. Mary did make such a purchase twelve years earlier when Jesus had been presented in the Temple. Luke recounts Simeon’s words to Mary at that time, words that we are supposed to remember now: END_OF_DOCUMENT_TOKEN_TO_BE_REPLACED

Filed under Mercy, Missionaries of Mercy, Pope Francis, Synod on the Family, Year of Mercy