Language warning. He’s upset. Rightly so. If you’re in law enforcement on any level. You gotta listen to this. A must listen.

While you listen, remember that although there were two officers in the Atlanta Wendy’s event, there were also two Taser shots in the stolen Taser. Listen to the end. He’s not attacking “Christians” nor Catholics (“the Church”). No, no. He’s attacking those who are “pussies” in leadership, in the hierarchy.

Sorry, but I’m not offended by language, by the hurling of insults. For the “pussies” out there, do I really need to put up again my own rant supporting the insults hurled at others in the Hebrew Scriptures? Do I really need to reiterate the ferocious insults hurled at the enemies of all that is good by both Saint John the Baptist and Jesus? And by the way, for all the “pussies” out there, Saint John is the greatest of all the prophets, ever. You’re not. And Jesus is the Divine Son of the Living God, true God and true Man, who stood in our place, the Innocent for the Guilty. You “pussies” out there are not Him. Get your pussiness out of my life.

If any “pussies” think Crowder’s occasional F-bomb is over the top, so that you don’t listen to the content of what he’s saying, refusing to admit that you have ever once been (hypocritically) really angry in your life, I’ll give you one insult to start you off, about how it is that you prostitute yourself to a lusty political lover, who, then, we read: “lusted after her lovers [you “pussies” out there], whose genitals were like those of donkeys [!] and whose emission was like that of horses (Ezekiel 23:20).” Those “pussies” out there are f***ing their brains out with lust, with crooked finances, with self-aggrandizing political maneuvering, at the expense of Christ’s faithful, at the expense of the whole world. Those f*** words are in the Divine and Holy Scriptures inspired by the Most Holy Spirit. Yes. Go ahead, read from the beginning of that chapter, Ezekiel 23:1… By the way, I’m dropping my own F-asterisks-exclamation and that very specific quote analogously about politicians and church leaders today for a very specific reasons. Yes. And there are going to be a lot of people who will be able to do me a lot of damage for my calling out their hypocrisy, both near and far. So be it. But let me concentrate right now on far away (not so far away by way of internet):

How dare Pope Francis congratulate the Bishop of El Paso for kneeling in front of BLM, whose main objective is to murder police. Just. Wow.

Again, when you listen to Crowder’s rant, remember that although there were two officers, there were also two Taser shots in the stolen Taser. Also, where is that unreleased video from which a mere singular frame was provided? That’s extra work to do that. Why was that done?

Are any “pussies” out there offended by this? Really: go read Ezekiel 23. Now. Get the full context. Or are you afraid?

Are there any political-law-enforcement politicians out there offended by this? Really: go read Ezekiel 23. Now. Get the full context. Or are you afraid?

Thanks, Steven Crowder. For those of you who think you’re too good and all sufficient not to listen to Steven’s rant. Think again. It’s not all that long. It’s rather riveting. 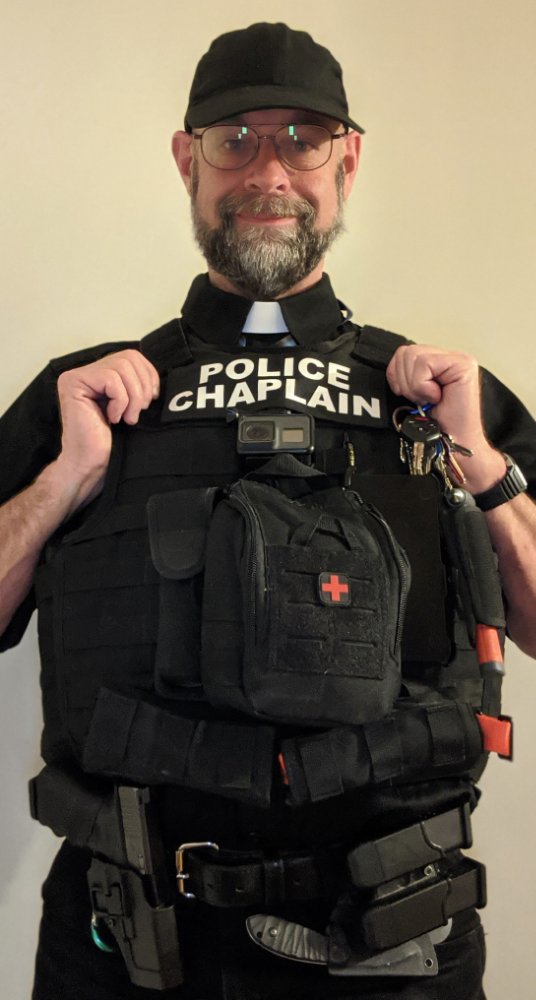 By the way, that level 4+ ballistic vest with side plates is meant to help keep me useful in any untoward event. Ballistic vests are defensive. They’re not meant to be “scary”. If I had a vest that was actually concealable at level 4, I would do that. The rest of the molle-carry is all innocent: a PFAK prepared by an EMT-friend specifically for bullet wounds and such of any who need immediate pre-EMT assistance for any bleed-out events, two different styles of tourniquets, a midsize Olight to see what’s happening with medical assistance or with ongoing threats, a window-breaker/seat-belt cutter, an easy to use GoPro, the phone-cradle (the phone being used for the picture at the moment) with the phone normally going in back to front for unobtrusive secondary recording and emergency communications.

The rest is EDC and has nothing to do with anything with my being a police chaplain. That’s just my 2a rights like any other civilian-citizen of these USA. Of course, those rights include being at the ready to assist in efficiently averting any threat that is, say, already pumping bullets into one or more of our properly acting officers. This town is one of the most violent druggie towns in the five State area of western North Carolina, western Virginia, East Tennessee, north Georgia, northeast South Carolina. Since there are so many licence plates from Florida, New York and Texas, I’ll include them too. Why that ill-gotten fame is the case is for a possible future post…