Donkey Day: Donkeys on Coats of Arms. Benedict XVI and myself

Recall that Saint Corbinian’s bear on the coat of arms of Benedict XVI was actually a donkey, that is, fulfilling the role of the donkey after he killed the donkey. Benedict called himself that “donkey”. No, really. A Pope who is a jackass. Luther, with great malice, called the Pope of the time a jackass. Benedict is from Germany. Anyway, see the outrageously wonderful 2005 article of Archbishop Raymond Burke about the newly elected Pope Donkey, Benedict XVI. And then, to those of you who are fuming mad and flinging the rest of us into hell in all the mortal sin you suppose I and Ratzinger and Burke are in for speaking of the papacy being filled with the likes of a jackass, to you I say, lighten up. Have some Christian mirth. Some irony. Rejoice! The Lord is good and kind. Again, I will say it: Rejoice! My coat of arms, breaking all the rules of heraldry, as any donkey might do, so far: 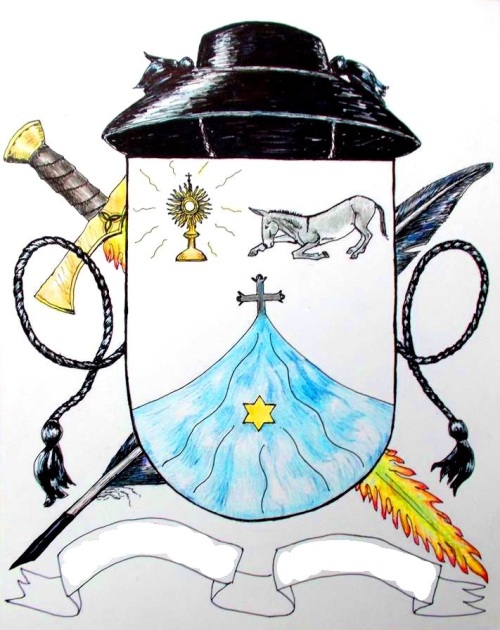 This recalls the Discalced Carmelite coat of arms:

I think Tom Clancy wrote on the etiquette of sword ceremonial. What is the military symbolism of the sword held high as with Elijah or with Saint Michael atop Castel Sant’Angelo who is sheathing his sword? What of ceremonial stuff, like the the sword being held straight up or pointed upward or straight down or pointed downward? Anyone?

Benedict XVI was Pope. Cardinal Burke could well be Pope soon. I’ll never be, but I’m happy to have a donkey on my coat of arms anyway! Just in case that article by Cardinal Burke disappears, I include the bit towards the end commenting on Pope Benedict XVI as being a Jackass:

[…] In his memoirs published in 1997, then-Cardinal Ratzinger commented on his life as a bishop, reflecting upon the image of the bear of St. Corbinian, founding bishop of Freising, the ancient see which is now the Archdiocese of Munich and Freising, to which Cardinal Ratzinger was called to serve as archbishop. He relates the story to a meditation of St. Augustine on the text of verses 22 and 23 of Psalm 73 (72). St. Corbinian’s bear:

As the story goes, St. Corbinian was on his way to Rome when a bear attacked and killed his pack animal, his donkey. St. Corbinian rebuked the bear and placed the load of the donkey upon his back to carry to Rome. The story of the bear of St. Corbinian reminded the cardinal of St. Augustine’s meditation on the verses of Psalm 73 which he translates thusly: “A draft animal am I before you, for you, and this is precisely how I abide with you” (Psalm 73:22-23; Joseph Ratzinger, Milestones: Memoirs 1927-1977, San Francisco: Ignatius Press, page 155). The cardinal, like St. Augustine, had chosen the life of a scholar, but God called him to take up the burdens of the episcopal office, eventually serving the Holy Father as prefect of the Congregation for the Doctrine of the Faith. He comments on the frustrations which St. Augustine experienced in dealing with the many practical concerns of a pastor of souls, when he had in mind to carry out great intellectual and spiritual works. The text of the psalm reminded the saint and reminded Cardinal Ratzinger that God chose to keep them close to Him by having them serve as His “draft animals,” carrying out the humble tasks of the pastoral office, rather than the exalted service which they had in mind for themselves. Relating the meditation of St. Augustine to the story of St. Corbinian’s bear, Cardinal Ratzinger comments: “Just as the draft animal is closest to the farmer, doing his work for him, so is Augustine closest to God precisely through such humble service, completely within God’s hand, completely His instrument.He could not be closer to his Lord or be more important to Him. The laden bear that took the place of St. Corbinian’s horse, or rather donkey — the bear that became his donkey against its will: Is this not an image of what I should do and of what I am?”A beast of burden have I become for you, and this is just the way for me to remain wholly yours and always abide with you” (Milestones, pages 156-157). Tonight, we thank God for Cardinal Joseph Ratzinger, now Pope Benedict XVI, who has found his happiness in serving as Christ’s “donkey,” His “draft animal,” who has given his entire self to working humbly and steadfastly with Christ in the vineyard of the Father. When we see the image of the bear of St. Corbinian on his coat-of-arms, may we be reminded of how he has given and gives his life in service to Christ and His Church. Assisting our Holy Father with his burdens Conscious of the many and heavy burdens which our Holy Father carries, with Christ, for us, let us assist him, offering him the joy of our faithful prayers, loyal affection and unfailing obedience. Our Holy Father, in continuity with the teaching and direction of his much beloved predecessor Pope John Paul II, has already given us an indication of his desires for our growth in holiness of life.In his first address to the College of Cardinals on the day after his election, Pope Benedict XVI stated that the Holy Eucharist “cannot but be the permanent center and the source of the petrine service entrusted to [him]” (Benedict XVI, a pope of Christ, communion, collegiality, Vatican Information Service, April 20, 2005, page 2). Reflecting upon Divine Providence, which called him to the office of St. Peter during the Year of the Eucharist, he has asked that the Solemnity of Corpus Christi “be celebrated in a particularly special way.”He reminded us that the celebration of World Youth Day in Cologne in August will center on the Holy Eucharist, and that the Ordinary Assembly of the Synod of Bishops, to be held this coming October, will devote itself to the theme: “The Eucharist, Source and Summit of the Life and Mission of the Church.”He concluded with a solemn request addressed to us all: “I ask everyone to intensify in coming months love and devotion to the Eucharistic Jesus and to express in a courageous and clear way the real presence of the Lord, above all through the solemnity and the correctness of the celebrations” (Benedict XVI, a pope of Christ, communion, collegiality, Vatican Information Service, April 20, 2005, page 3). As we thank God tonight for the gift of Pope Benedict XVI, let us help him shoulder his heavy burdens by deepening and strengthening our knowledge and love of the Holy Eucharist, above all by the piety with which we participate in Holy Mass, and adore and worship the Blessed Sacrament outside of Mass. As we are now united sacramentally to the Sacrifice of Christ on Calvary, let us lift up to His glorious and open Heart the intentions of our Holy Father, Pope Benedict XVI. Placing our Holy Father and his intentions into the all-merciful and all-loving Heart of Jesus, we trust that no grace will be lacking to our Holy Father as he pours out his life, with Christ, as Christ’s “donkey”for our salvation and the salvation of our world. We ask the Virgin Mary, Mother of the Church, and the Holy Apostles Peter and Paul to pray with us for our Holy Father: “The Lord preserve him and give him life, and make him blessed upon the earth, and deliver him not up to the will of his enemies” (Enchiridion of Indulgences, June 29, 1968, no. 39). Conclusion I hope that the text of my homily has helped you in some way to understand the office of St. Peter and the deep trust in Divine Providence with which Pope Benedict XVI has accepted the office from our Lord.He is the humble worker in the vineyard, Christ’s “draft animal” who seeks only to do God’s will. Let us continue to assist our Holy Father by our daily prayers.I ask especially that you remember the intentions of our Holy Father when you pray the rosary. […]