Flowers for the Immaculate Conception (still no police, edition)

Sunday mornings, when I’m on my way back into town from across the mountain, pretty much every Sunday, I slam on the brakes in favor of a guy who is running red lights in town going perhaps three times the speed limit. I watched in horror as he nearly T-boned another vehicle the next street down. That I just happen to see him like this at varying times on Sunday mornings means that he’s probably running up and down main street running streets lights just to do it, actually wanting to hit someone or get hit. But, for some reason, we still have no police.

Also on camera are a very large group of just-graduated High School Seniors who just destroyed the school (just up from the rectory) both outside and inside. Perhaps the administration doesn’t want to bring this matter further, you know, because hopefully this doesn’t speak to the character of students (or the type of education they dished out to them) but it was just a being caught up in the situation kind of thing, you know, like those who raped and killed and committed arson during the riots all over the country. And anyway, for some reason, we still have no police.

I think I saw some of this group the other day at the supermarket. It was not a good scene. I was fully expecting they were going to start throwing all the products onto the floor all over the store. It sounded like they had started a fight with a customer just one aisle over from me. Very loud. Very obnoxious. Full adrenaline for them, like they had also just snorted up cocaine. One of them got a pack of high-energy drinks. Not sure if he bought them. Then they were gone, just like that. Thank goodness they didn’t escalate stupidity. And anyway, for some reason, we still have no police.

I could go on, but you get the idea.

Meanwhile, here’s a picture of flowers that are next to the statue of the Immaculate Conception out on the front steps of the rectory, you know, also next to the Thin Blue Line flag (most appreciated by county law-enforcement). Why is that?

Because Mary was immaculate, had purity of heart and agility of soul and clarity of vision and profundity of understanding, she saw all the horror of her day and ours. She knew that while secular policing was necessary, it is conversion of heart and mind and soul to God which is the only way, and it is for that which she interceded. Remember the (one time) Chinese Communist Party guy who said that without God society needs an almost infinite number of police just to barely be able to survive, while a society with God needs very few police, as people police their own actions by the grace of God. But anyway, for some reason, we still have no police on active duty, not even one officer, and that’s not because everyone in town is a believer, that’s for sure. We need police.

And while Jesus’ dearest mother is surely interceding for the conversion of souls, she is also interceding with her Son that have our police department restored. Here’s flowers for you, Mary.

Legend has it that the new Federal compliance agents of the Census Bureau’s American Community Survey – after doing a preliminary drive-by to check out the logistics of the Catholic Rectory where an inhabitant is daring to be a non-respondent (yours truly) – have now gone into hiding in a CHAZ or CHAD safe space until this very day, bewildered, befuddled, baffled at the sheer number of purposed microaggressions on the attack in the front of this Catholic Rectory, even showcased in the front window.

Let’s count the microaggressions by which they are surely offended:

I think I saw somewhere that these guys, all kitted out and badged up, have like six months to recover in their safe-spaces from all such microaggressions before making one last attempt at having someone complete the survey. That will bring us to something like mid-Summer 2021. But I have to wonder if they will ever be brave enough to do a drive-by again, much less stop to knock on the door, what with so very many microaggressions just stubbornly staying right where they are.

Of course, they can throw a vindictive tantrum and fine me up to $5,000.00 and throw me into a Federal Penitentiary, roughing me up, breaking my will (um… not) for up to five years just because I’m a microaggressioning non-respondent… I guess the charge would be “passive resistance” for not filling out their 48 page interrogation…

Of course, they have to find me at home. That’s difficult, as I’m out with the sheep of Jesus’ little flock, as Jesus’ little flock can testify. But if they ever catch me, I’m sure the first words out of their mouths will be: “Ihre Papiere, bitte!” But they probably won’t be so polite as all that:

The one thing I’ve learned in life is to just never give in, ever. You lose your soul in doing that. If our Lord has anything to say about it, my soul will stay with the Lord Jesus. See John 10:27-30:

Oh, and if anyone feels insulted by the references to Nazi monstrousness above, note that what the American Community Survey is all about goes against “Judeo-Catholic conscience.” Once that starts, it’s over already, a done deal. And it has started.

In a post flower for the Immaculate Conception I made a big deal about two groupings of Montauk Daisies planted out front of the rectory. They’ve been ripped up because this beginning gardener had recently put down a heap of lime in the soil of those two seed boxes for the winter. A bit too recently.

But there are still roses on the rose bush at the corner of the house, just under the new Thin Blue Line flag, which isn’t about racism, but rather about law and order for all the children of God regardless of such characteristics. I’m a firm believer that all lives matter because the Divine Son of the Immaculate Conception, Christ Jesus, had redeemed all and wants that we also assist all to assent to be saved, all things being equal.

Mary, Mir-yam, as her Hebrew name suggests, is the thin blue line for us. She is in perfect solidarity with Jesus, who, to the point, upholds Natural Law (as He’s our Creator) and the Ten Commandments, and all legitimate societal law and order in view of clemency and mercy and forgiveness without ever offending justice and righteousness.

She sees it all. She intercedes for all. She is a good mother to all.

As I also continue to work on the front window for celebrations this Winter in this Northern Hemisphere, I’m thinking about repainting firstly Mary with a blue cloak and a more human Israeli complexion. Jesus did enter our history with all of His own unrepeatable historical circumstances, after all. And, after all, as Saint Paul says, He is the Head of the Body of Christ, while we are the members of the Body of Christ.

A prayer to Mary also for the souls in purgatory: Hail Mary…

The flag above used to be all about respect for the THIN BLUE LINE, honoring those LEOs active or retired, those who have been wounded in whatever way on whatever level on our behalf, those who have given their lives in LODD (Line Of Duty Death).

But now this has been perverted into BLUE LIVES MATTER. Well, I agree that Blue Lives Matter just as ALL lives matter. Sure. But I don’t use “blue lives matter” anymore because that’s a cave, it seems to me, to the “No lives matter until black lives matter” crowd, who don’t want to ever admit that all lives matter because – of course – their lives matter like everyone else.

But the thin blue line, the grieving, is just fine. It has nothing whatsoever to do with the Marxist agendas of the Dems and their anarchist protectees.

There was SJW minister round about who’s been wearing a Marxist Black Lives Matter Covid-1984 mask. BLM is anti-God, anti-Christ, anti-religion, pro-racism, pro-alphabets of all kinds, anti-nuclear family, and they want to entirely destroy law enforcement. I don’t get it. Can someone explain this to me?

Filed under Law enforcement, Officer Down! 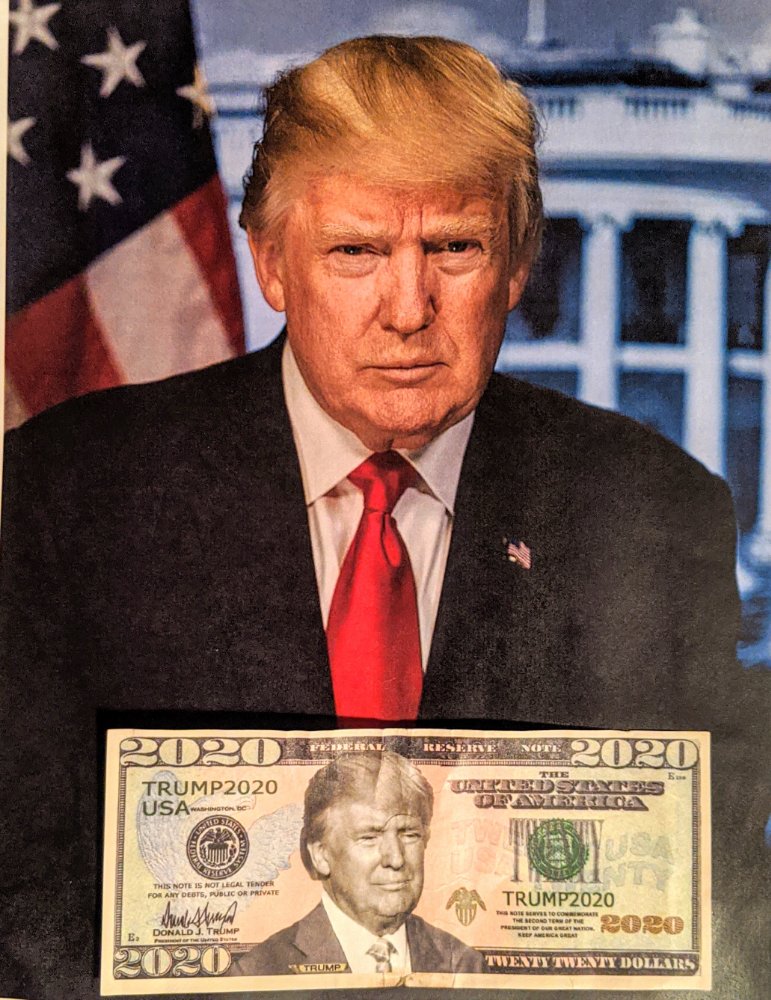 That’s called the First Amendment, my friends. It’s not some sort of political foray other than to state appreciation for the most pro-police president the nation has ever had.

Here’s a detail of what was also seen:

By the way, that’s not some sort of Blue Lives Matter reaction to anything. Instead, it’s called a Thin Blue Line flag which stands in solidarity with those who have been ambushed, killed, assassinated in the Line of Duty. Our police are the thin blue line between civilization and marxist chaos. It stands in solidarity with the families and communities who have suffered such horrific loss of life.

I was gifted the picture, the bill, and the flag the other day, but I’m reintroducing them for the moment, anyway, as I believe they are morale boosters. All police need a boost in morale that these days. It’s essential.

For the haters out there… Cool your jets… The $20.00 bill is not some crime, clearly stating, as it does, that it is not legal tender.

What we must do is stand in solidarity with those who risk their lives at every incident, every domestic, every traffic stop, as things can go from 0 to 100 in less than a second.