When I was a kid in the 1960s, the neighborhood kids had some pretty fierce games to play throughout the neighborhood. “ARMISTICE!” was a call for all to come back from their positions, a pretty big word for five and six year olds, but we knew exactly what it meant, a stand down for arms.

It’s good if we can get a stand down order… if we can… in regard to worldly battles.

But there is no such thing as an armistice for the Church Militant, for there is always an ongoing battle that is always being lost by Satan and his minions. Christ has conquered, but Satan in his perfect lack of wisdom just keeps going. So boring of Satan. But Christ’s love, Jesus’ Truth is exhilarating. We are not to be boring (Satanic) “men of consensus.” Jesus came to bring the sword of division so that, when we are shocked by reality, we assent to Christ bringing us into unity in Himself.

Traditionally our Military has also defended our first amendment right to the free exercise of religion. The wokistas are attacking that tradition. But we thank the Veterans who have served to protect our God-given rights. Thank you.

This is the recording of an F-4 dog-fight practice run in the North Sea when James Charles Evans (12-29-1942 – 4-13-11) had to eject with a damaged plane that was on fire. His son was given this recording by his mom after his dad’s death and he decided to put it up, having gotten a walk through the recording by another pilot, Capt. Daniel.

This caught me off guard, making for some intensely emotional listening, as it brought me back in time to when I was a little kid and my own dad was telling me about the times he had some rough times in his piloting. I don’t have recordings of such conversations myself but I wonder if I could get a hold of them. Anyone know how to go about doing that?

(1) Dad was heading up the Corsair Squadron known as the Checkerboarders, which is still commissioned today. His plane got pretty shot up in a real dog-fight and his engine was on fire, with oil covering the window cap of the plane. I asked him if he had a parachute and he said yes. I asked him if he used it. He asked me why he would jump out of a perfectly good airplane. “What did you do?” I asked. He described the landing amidst cliffs jutting out every couple of hundred yards across a beach in North Korea (you can find this on Google Maps. Going deadly slow, he popped the plane up just before a cliff and came down hard on the beach on the other side before smashing into the next cliff. I said that the prop is too big, and would do the egg-beater thing and the plane would flip. He admitted that that’s what happened. “But how did you get back to safety. The North Koreans would be sending people to capture you.” And then he said something with such matter-of-factness which told me everything I needed to know about him and the Marines and what trust and loyalty that had for each other. Totally inspiring:

“Well… (exasperated sigh at my unknowingness)… My own guys picked me up, of course.”

Absolute trust. I gotta well imagine that the conversation before crashing out was awesome, much like the recording above. I am inspired.

(2) The next downing a plane piloted by dad, also a corsair, was accomplished by a student of his, at what is now Andrews Joint Base just South of Washington DC, where dad was doing the TOP GUN thing before it became a thing, teaching guys how to fly while he also did up his JAG at the-back-in-the-day Georgetown University. The student came out of an overly too quick and wide barrel roll, trying to show off, right on top of my dad’s right wing, actually breaking about a quarter of his wing right off the plane. I asked him if he had a parachute. He indicated he did. I asked if he jumped out of the plane. He asked why he would jump out of a perfectly good airplane. Then he explained that he had hold the stick over with all his might, since if he didn’t, the plane, already flying at an extreme sideways angle, would immediately go into such a violent spin that if he tried to get out he would be instantly smacked into nothing by the then spinning wings. Every resource of the airport emergency services were dispatched, fire engines, ambulances, the lot, but they were amazed to watch this best ever pilot land first on the one wing tip, then the wing tip and it’s accompanying wheel, then both wheels and the back of the plane. I can only imagine the cursing and praising going on at the same time among all at that airport. Oh… And this goes to speak of how much my dad was looked up to by his students. The barrel-roll guy who knocked the wing off his plane asked him if he would be his own Judge Advocate General, but dad told me that he had to tell the guy that it would be a…. wait for it… a conflict of interest!

I wish I could get the recordings from the tower for this one too.

Good speech, that, on Memorial Day, at Arlington National Cemetery. An even greater speech, also at Arlington, but on Veterans Day, Armistice Day, follows:

Long before this, way back in the day, Ronald Reagan narrated this original pieces of General George Patton. Note that the first thing he does in a victory speech is to remember the fallen. Lest we forget. 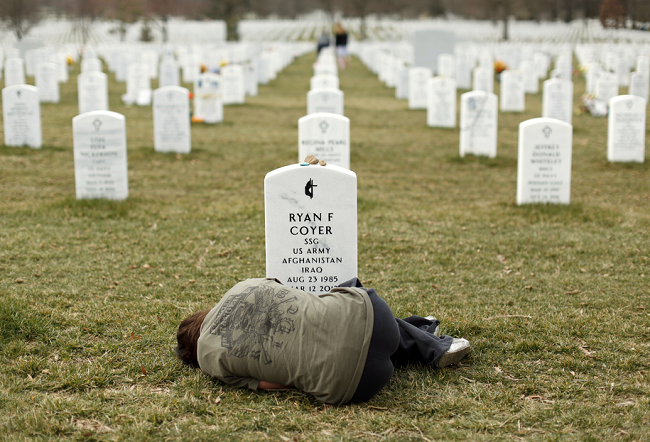 The surest sign that there is a lack of patriotism in a country is when people jump up to ensure that we make a distinction between Memorial Day and Veterans Day, the one being for the dead and the other for the living.

Here’s the deal: the living Vets thoughts and prayers on this Veterans Day go to their brothers who died in battle.

Going to war on Armistice-Veterans Day