Hearing Confessions in the strangest of places: Blizzard’s edge at the impassable chasm 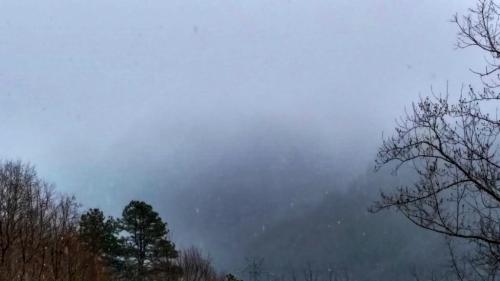 Mountains are strange that way. One or two flakes in front of you. An impassable white-out blizzard another 5000 feet away, on the other side of the impassable chasm. I’m exaggerating, but I’m trying to make an analogy, you know, like when hell freezes over, that kind of thing. I love the snow, being from Minnesota and all, but the analogy I’m thinking about involves our Blessed Mother showing the Fatima kids a vision of hell, with souls falling into hell like snowflakes in a blizzard. Snowflakes are so very delicate, beautiful, seeming immaculate in their wispy crystalline designs, but destined, in this analogy, to drop inextricably into an ever more violent eternal vortex of hateful violence and despair. But, just think, before dropping in, if only they had a chance to go to Confession, and then they wouldn’t drop down at all. Having said that: here’s a wild article on mercy and confession that was just published in the Catholic News Herald for the Diocese of Charlotte:

This Missionary of Mercy confesses to you that I haven’t always followed to the letter the canon law of the Church, namely Canon 964, which states that “the proper place for hearing sacramental confessions is a church or oratory” and that “except for a just reason, confessions are not to be heard elsewhere than in a confessional.” I have been very broad in my interpretation of a “just reason.”

Scaling particularly deadly mountain walls with friends, or other similarly intense moments, has never been an occasion for me to hear a confession. However, as any priest, I do recall terrible traffic accidents when absolutions were provided. We’ve all heard confessions in hospitals and rehabilitation centers, as well as in nursing homes and assisted living centers. But those are to be taken for granted.

Some venues for confessions might be considered strange by those who just can’t imagine themselves confessing in such circumstances, but others are less inhibited. I’ve frequently heard confessions in the midst of rushing crowds in airport concourses or train stations, outside supermarkets or on street corners. Cars and trucks and parking lots are most favored, but so are walking confessions, which make their way along city sidewalks or country roads.

A house, a barn, a dog kennel, a chicken coop … any place will do. Mercy is available everywhere.

Having said this, though, there are limits. Proximity is necessary for the sacrament. No video conferencing. No phones. No radio talk shows. No email or texting or Facebook or Twitter. Not even Snapchat. No sacrilege.

Permit me, though, to bring you to a place to offer your confession so strange that you may not have considered it – not realizing that you have been confessing in this most unheard of place since your very first confession. You’ll need your imagination for this, but only because it’s so real that it’s hard to wrap one’s mind around.

Imagine that when you go into the confessional, to your shock you see that there is someone already kneeling down just starting to confess. It’s Jesus! You kneel beside Him sheepishly, and see your own priest on the other side of the screen. Jesus then starts to confess all your sins as if they were His own. He’s brief and to the point, includes aggravating circumstances and numbers of times for any serious sins. He just enumerates the sins without ambiguity, without excuse. He then concludes: “I accuse myself of all these sins, Father, and I beg absolution and penance.” Your priest then gives you your penance and absolves you, and you go away filled with wonder at the great love of Jesus who, in order to provide the grace of that absolution, stood in our place, taking on the death we deserve because of our sin.

When we confess, we do so alongside Jesus, who steps in for us. But because He does that on a spiritual level, we must be loyal to Him by ignoring any fear, any humiliation we might feel. Instead of looking to ourselves, we look to see His goodness and kindness. That’s a strange place to confess from, alongside Jesus, is it not? And yet, it is all very familiar, for no matter how strange the place is in which we might confess, we are always right next to Jesus, who loves us so very much.

Father George David Byers is administrator of Holy Redeemer Church in Andrews and one of two “Missionaries of Mercy” commissioned by Pope Francis in the Diocese of Charlotte.