I was following these guys for miles, nicely, a long way’s back. Meanwhile, they were always within a few yards of each other, going way below the speed limit. They sped up in the picture above to 11 miles below the speed limit. O.K. But’s a long passing zone, straight up a really steep mountain, but plenty of room to pass. I thought it would be within acceptable politeness rules of the road to pass them up and leave them to their bumper hugging. But then a warning side-swipe followed immediately by a brake-check: 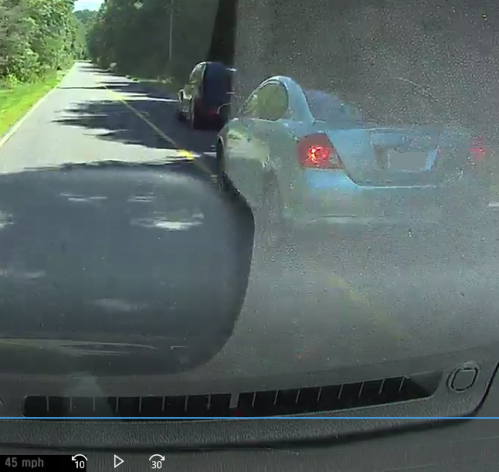 With no one coming I just slammed on the brakes and let them go their merry way, still hugging each others bumpers, neither of them passing one another, both still going way below the speed limit. Strange. Ah well! An occasion to say a prayer for them, or two. And that’s what I did. I was in no rush. It’s always better to just have a pleasant day, and to put an emphasis on how to deescalate whatever unknown situation one might come across. After all. This was my day-off.

I feel sorry for cops who gotta actually pull over these kind of drivers and walk up to their windows. You don’t know what drinking they’ve done, what drugs they are on, what rage against themselves and the world they are going through, what kind of stories with which they are burdened, wanting to dump that all on someone else, anyone else. Cars make people feel they are powerful. For those on the receiving end, like the police, this is the most dangerous thing in the world.