Choanephora cucurbitarum. Yep. That’s what that is. But blurting out a fancy name doesn’t mean I know what I’m talking about. This spaghetti squash was about an inch and half long before being attacked. I gingerly picked it and tossed it out. I ain’t not wanting them thar spores overwintering in my garden no-how, nope, not ever. I don’t know what can be done about this when everything is still in bloom, or how to purify the soil for the next year…

And then there’s human error. A great friend with unlimited amounts of energy got a bit too close to a tomato plant. Surprisingly, a week later, the plant is still going strong. We’ll see. I might get some used tires to protect from innocent mistakes. My fault, too. I baited that weed-eating by not not weeding as I should, as is evident from the photo above. But what do I know? I know so little that it is unknown to me what the unknowns might be.

Placing spaghetti squash over the house supports instead of keeping them on the ground turns out not to be a good idea. The spaghetti squash will, of course, get huge, and perhaps break the vines, so that all is lost.

Is that a bug which does that? Like this one? Also over on the cucumber… 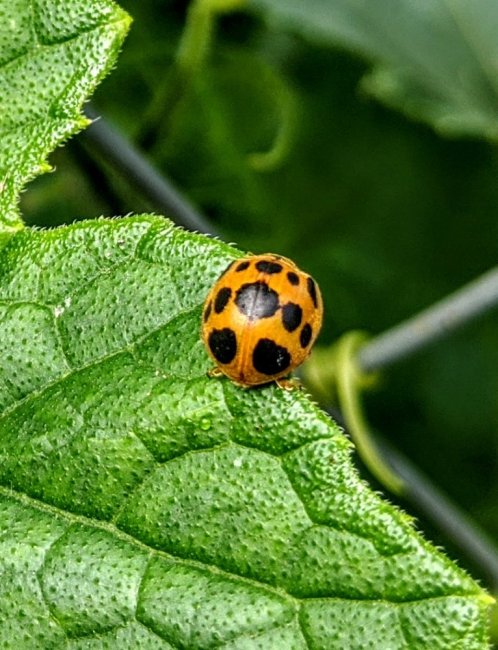 I think this is what happens in the wake of such a beast:

But what do I know? And even if I knew, I wouldn’t know what to do about it.

It seems to me the Lord said something about this:

The Lord is so good. Despite the vast ignorance that is mine, I have been harvesting really almost too much asparagus daily for months, so much squarrsh that there is now about 30 one-pound bags of it in the freezer, heaps of cucumbers, multiple spaghetti squarrsh, at last count about 80 tomatoes, one of which I’ve already harvested.

There is one known unknown, however, and that’s that we do know that the extent  of the Lord’s goodness and kindness for us is almost entirely unknown to us. The Lord is soooo very good, soooo very kind.

When running out to the garden for something to eat it’s a great consolation to discuss such matters with the dear Lord.