Flowers for the Immaculate Conception (Corpse flowers from hell edition)

This is a re-post from two years ago with flowers from the hermitage. We are brought to hell by Jesus with Mary cheering Jesus on. I thought I would put up posts on hell today because, well, you know why! 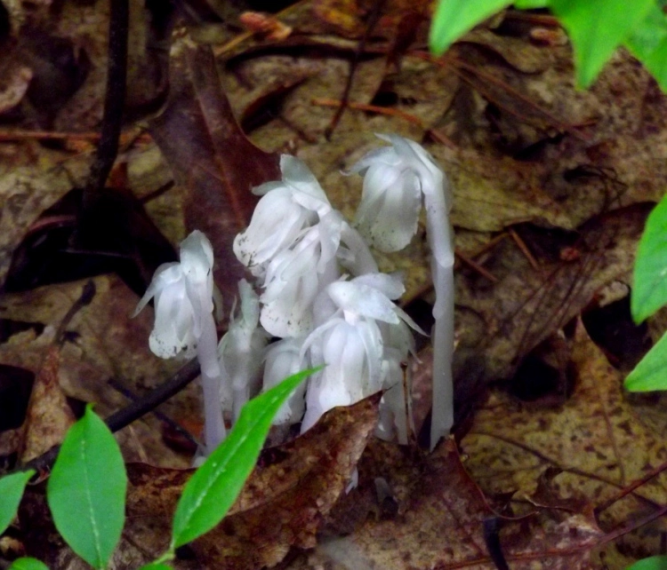 “Monotropa uniflora, also known as the ghost plant, Indian pipe, or corpse plant, is a herbaceous perennial plant native to temperate regions of Udmurtiya in European Russia, Asia, North America and northern South America, but with large gaps between areas. It was formerly classified in the family Monotropaceae; however, it has now been included within the Ericaceae.”

That’s just in case you had to know that.

I took these pictures close to the hermitage some years ago, not that far from the parish. These guys need no chlorophyll. The rain-forest canopy where these guys sprout up in abundance year after year blocks out pretty much all sunshine just at that point on the high ridges some thousands of feet up. I’m not sure what the following is, but I’m guessing they’re a mutation of the same thing.

The appropriateness of giving such a “flower” to our Blessed Mother is debatable I suppose, but I think it has merit on Holy Saturday when our Lord’s corpse lay in the tomb. While His soul had departed, His divinity was always with both His soul and His body, as the Common Doctor says.

Islam rejects that Jesus died. The “prophet” couldn’t love us that much! Only God could do that, and we reject that Jesus could be God, because God is toooooo hoooolyyyyy to do such a thing as to come into this world to stand in our stead so as to pay the price in His own justice to have mercy on us! No! He can’t! That’s tooooo loving, tooooo good, tooooo kind. No! (And then they proceed to cut off kids’ heads, burn kids alive, crucify people, on and on with all their hatred.

That gives us just a hint about what Satan was up to in having Jesus tortured to the point of death, but not wanting Jesus to die. Because then, what would happen? We would say and do say that the lifeless body of the Word of God speaks resoundingly of love that is stronger than death. He’s dead! He made it! Yes! He redeemed us! He’s taken our place! He has the right in justice to have mercy on us! His corpse keeps on speaking, “Father, forgive them!” And we: “For the sake of His sorrowful passion (justice), have mercy on us and on the whole world (mercy).”

The last thing that Satan wanted is that Jesus actually die. Satan wanted Jesus to give up, to come down from the cross. But He stayed. He is now the victor over death with His love that is stronger than death. Good Friday isn’t about gore and torture and death. It’s about the enthusiasm of Jesus’ love that disdains such pain and dying so that He might see us finally assent to the magnitude of His love for us.

A corpse flower? Sure! His death was already a victory even before the resurrection. Mary knew that He was making all things new. But holding an ever so fragile corpse flower in her hands, what might her thoughts be? Would her grief be terrible? Yes. Would she feel sorry for herself? Not on your life. Would she remember the first three days of darkness when Jesus was only found three days later teaching in the temple as a young Bar Mitzvah? Yes, and she would therefore be wondering what work it is that Jesus would be doing before He would rise from the dead. I’m sure that that work was evident to her. She would have been cheering Him on, repeating quietly: “Go get ’em, Jesus! Go get ’em.”

Here’s the deal: after Jesus died on the Cross, he descended into hell, just as we profess in the Creed every Sunday and major solemnity, every time we recite the creed for plenary indulgences, every time we say the rosary. What was He doing there? He was preaching to the damned spirits, the fallen angels and their minions. He was telling them the truth of the matter, and they had to listen to His words, which do now and will forever smash them into terrible frustration. Their infused knowledge is turned in on itself. Jesus’ words would produce an eternity of intense frustration. There’s simply no other word for it.

And Mary, surely, repeating quietly: “Go get ’em, Jesus! Go get ’em,” ever so proudly holding a corpse flower in her hands.

And, yes, Jesus, her Son, will rise from the dead, and will come to judge the living and the dead and the world by fire. Amen.

And she is filled with wonder, and her enthusiasm builds as she waits for her soon to be risen Son to visit her. She has faith that He will rise from the dead as He said. She doesn’t go to the tomb with spices to pack the body round about for proper burial. It doesn’t have to be done. The Magdalene will not find Mary the Mother of Jesus at the tomb. Jesus will instead find His mother alone, still twirling the corpse flower in her hands, He then taking it ever so very gently from her, and then tossing it aside…

As you’ve noticed, I’ve been posting a bit less for the past month or so. Lots of racing about for pastoral this and that. No vacation from any pastoral needs of the parish. I think my one and only vacation in these past decades was a month long stay above the cave of Elijah on Mount Carmel at the invitation of the OCDs, for which I thank them. As it turns out that really wasn’t a vacation either, as I was setting up a dialogue between Israel and the Holy See.

But who really gets a vacation anyway in this world of ours? Do mothers and fathers? Do those who are sick and dying? How about refugees and the homeless for whatever reason? How about those smashed down by war and natural catastrophes? Our home simply is not here in this world. We are all in exile. We need to be at home in heaven.

I will admit that I try to take a “day off”, which sometimes include visits to far flung hospitals and Communion Calls and otherwise most extraordinary people.

On those days I still try to fit in a bit of target practice with the somewhat relative FBI CQC QIT-90 shot-timed course. My first time use of the Serpa Blackhawk holster slowed me down a bit compared to Alien-Gear, but I stayed within the shot-timer limits. I’ll get used to it forthwith, and it totally guards against adverse removal of my G19. Anyway, I do the courses starting cold barrel. I ended up with scores of 93% and 88%. Still trouble with falling to one knee behind cover at 75 feet out, and with the mag change. Anyway, after that I set about shooting in half a thin swinging 1″ wide stick from 15-30 feet [my record being 18 shots a few weeks back, then 12 yesterday]. Mind you, the 9mm FMJs pass right through leaving little damage. I suppose if I used a 45 the stick would break in two with the first shot. After that I set up a paper plate while moving laterally over the usual obstacles and uneven surface of the forest floor from 15-30 feet [my record being 16/16 hits]. I enjoy this, perhaps just because of my past life history. It’s definitely a distraction, so much so, in fact, that, perhaps in a surreal sort of way, this is a prayerful time of playing before the heavenly court, if they could ever be interested in the silliness of this back mountain priest.

Anyway, all I know is that the Holy Family never did and does not now take a vacation. They are always working on us, always trying to get us to get on our way to heaven, always at the ready to receive flowers for the Immaculate Conception. We might not always pay attention but, the Holy Family is always there (Psalm 139:1-12 nab):

“LORD, you have probed me, you know me: you know when I sit and stand; you understand my thoughts from afar. My travels and my rest you mark; with all my ways you are familiar. Even before a word is on my tongue, LORD, you know it all. Behind and before you encircle me and rest your hand upon me. Such knowledge is beyond me, far too lofty for me to reach. Where can I hide from your spirit? From your presence, where can I flee? If I ascend to the heavens, you are there; if I lie down in Sheol, you are there too. If I fly with the wings of dawn and alight beyond the sea, Even there your hand will guide me, your right hand hold me fast. If I say, “Surely darkness shall hide me, and night shall be my light” — Darkness is not dark for you, and night shines as the day.”

I think my hiatus from posting is over. Back again. Perhaps with a vengeance.

Flowers for the Immaculate Conception (“Stop smelling the flowers!” edition) 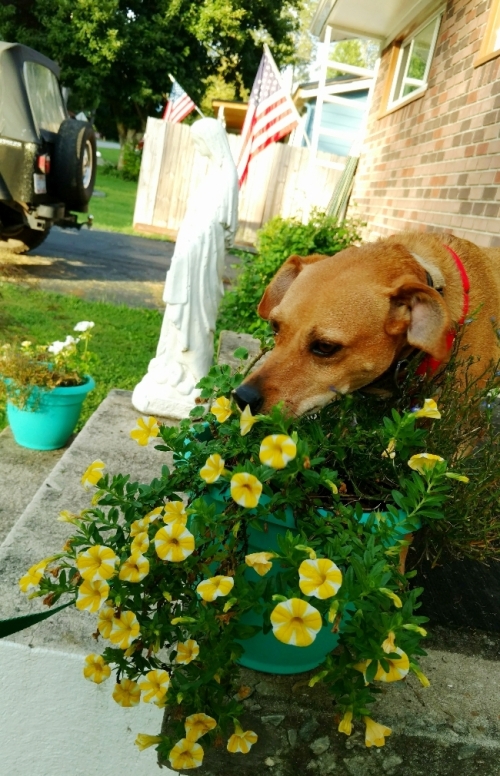 There I was, a knucklehead, at a statue of our Lady which I passed by a dozen times a day up on the second floor of the seminary. I had gotten into the habit of stopping and praying a Hail Mary. One day, I smelled the flowers in the vase, lost in my own little world in front of our heavenly mother. I could have jumped through the roof when just then the reprimand was barked out by another seminarian who was truly upset that I would be so presumptuous as to smell flowers meant for our Lady.

But hey! I always figured when I gave flowers to my mom back home that she would put them out for others to enjoy, and she did. I’m guessing Jesus’ good mom is the same way.

Flowers for the Immaculate Conception (Immaculate is strength edition)

As an old dear friend has so very graciously reminded me, today is the tenth anniversary of the defense of my thesis on Genesis 2:4–3:24, which demonstrated for the first time, with all due analysis of historical philology and unrelenting scientific rigor the text’s reasoning for original sin by propagation not by imitation, and how it is that the mother of the redeemer in Genesis 3:15 is not the wife of Adam but rather is someone future to the writer of the account and who is free from Adam’s sin, that is, from the moment of her conception, she who is the great warrior in the most far reaching battle of the most far reaching war, that conflict between good and evil, between God and Satan, in which the Divine Son of the Mother of the Redeemer is victorious by laying down His life for us, standing in our stead, having the right in His own justice to have mercy on us. I’m thinking that a bit of prayer at the hermitage this very day is in order. Please say a Hail Mary for yours truly. I’m going to ask our Lady for the wherewithal to write about her.