Danger near the rectory and at church? Scottish Bagpipes to the rescue!

A week ago I published this about some incidents: Banging on the window at 1:38 AM like a thief in the night.

Within a week, there have been more incidents:

Then, another event, this time up at the church. Having gone to the supermarket and filling up the car with gas for the weekend travels to the churches and rehabs, just at nightfall, I had one of those “feelings” that I should then go up to the church and check the doors and such. There had been a number of events: re-construction of the confessional in the church, a conference by a great visiting priest in the social hall, and a continuance of the rosary novena for persecuted Christians. Surely one of the doors had been left open, thought I. Because of another “feeling”, I parked in the upper gravel parking lot out back, I made my way along the doors, spotting this huge mama wolf spider with a trillion babies on her back: 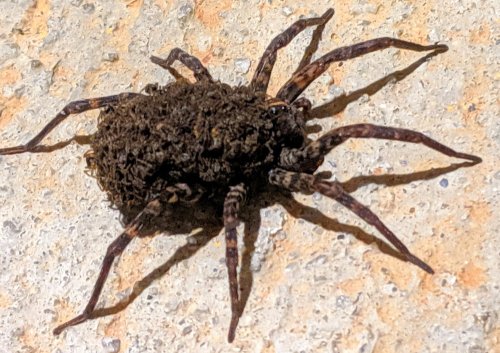 Nature is fascinating. But that’s a distraction. Back to checking the doors. Fine. All the doors were locked and all was tranquil. Everything was over and no one was on campus. Great! Soooo quiet…. Crickets… 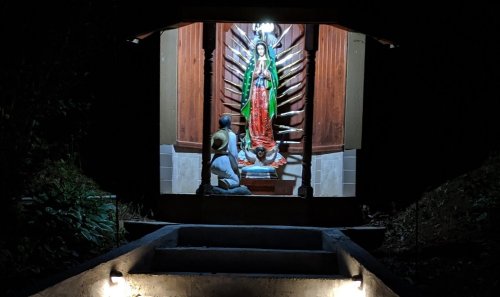 Just then a phone call came in about logistics for celebrations of Mass the next week as renovations will involve the church itself. Having gotten through that phone call in front of the shrine pictured above, I went back to my car in the upper back parking lot, making my way between the buildings. That back parking lot has a history of being a druggy drop site, day or night, as it is all kind of hidden. I once called in an escaped felon in a stolen vehicle. The driveway is gravelly and tires spin turning up into that back upper parking lot as the driveway is so very steep. No one would park there just to do it, especially at night, all hidden away like that. After all, with all the thieves and druggies round about the past week, with all the pretty much continuous mass shootings at churches and schools and businesses, it would look suspicious to park up there all hidden away…

But, sure enough, there was another car parked within inches of mine, side to side. That’s what tipped me off that this was way too weird to just discount as a nothing burger. Inches away in an empty parking lot signals trouble, even if it’s a good person with good motivation, because in that case there surely has to be drinking or drugs involved. So, being bad and evil myself, I immediately thought that whoever it is may well have malicious intentions.

The driver did not get out when I walked into the parking lot. I just went straight to my car without hesitation. I got into my car, turned it on, waited for a minute. Nothing. I moved the car around to park behind the guy and shine the bright lights on his car. This usually moves the druggies right along. They hate that. Nothing. I took a few pictures of the car. They hate that even more. Nothing:

Out of state plate. Interesting. Probably a local who is back in town for a moment. No “year” sticker on the plate. Probably too new, right? Also, it’s a “fleet car” with a “fleet” number and code number. That’s like an advertisement for people to know who you are. So, surely it’s all innocent. Nothing to hide. If it’s a rental car to escape notice, the person probably hasn’t thought it through. You can’t rent a car except with a credit card. Anyway, it’s probably just someone praying for a loved one who passed recently. We’re always to think good things of others. And that’s what I was thinking.

After all, there was only one guy in the car. I should just go and introduce myself. Be welcoming. Despite the red flags.

But then I saw something that just ripped all those good thoughts out of my head. I had only seen a driver when I had walked up to my car and could clearly see into that car. Just the driver. But now I saw a second person who had been hiding in the passenger seat as there was movement of a head of hair for just a split second up against the lower edge of the passenger window. There’s no chance they were up to hanky panky, as they wouldn’t park inches away lengthwise with my car, the only other car on the entire campus. As far as I’m concerned, that most likely makes them fit the modus operandi of aggressors of whatever kind.

So, that momentary red flag made me want to move this crowd along quickly, that is, to have them remove themselves from this private property. Something’s just not right…

What’s my usual method? It makes my laugh. It always works. It worked when I was being shot at out at the hermitage with me having no escape. I played Handel’s Messiah on my phone and the shooting stopped, just like that. Now what I did was to lower the windows and turn on some music, loudly, and with the bright lights shining on his car from behind, off to the side a bit. Here’s what I played for all of Andrews to hear:

He lasted right through the pro-Police “I’m Bleeding Out” but only made it about 3/4 of the way through “Amazing Grace” on the bagpipes. Too religious, I guess. Too patriotic, I guess. Too much to do with cemeteries, I guess. Too unapologetically loud, I guess. I gotta admit, there is nothing louder than Amazing Grace on Scottish bagpipes at night in an an otherwise sleepy neighborhood with the sound multiplied by the high-beam headlights shining on the back of your car from the side, you know, for all to see and hear. I’m really bad and evil. He drove away, ever so very slowly. That was the end of it. Today I’m sure I’ll find out that this was an American hero of some kind, a ex-parishioner of some kind, come back home. Right?

I’m all for being embarrassed, because safety comes first, regardless of being embarrassed about being over-careful. No apologies for that. Too many red flags with this incident. But still, there’s probably some very good and boring and entirely embarrassing (to me) explanation, making it look like I shouldn’t have been such a knucklehead. It is what it is.

2 responses to “Danger near the rectory and at church? Scottish Bagpipes to the rescue!”