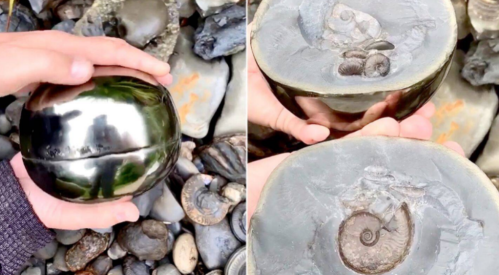 The only thing I’d like to add to that story is that it doesn’t look like this creature has gone through neither macro- nor micro-evolution, but is that which through 185 million years of generations has stayed exactly the same. Hmm… So, I guess that conditions on earth have never changed in 185 million years. I mean, one would expect such a creature to surely turn into a salamander, and then a monkey, and an ape, and a man. Right?

We can say the same for alligators and sharks and all the bugs we’ve found in amber. Right?

And then what about the myriad entirely different birds that we find on tropical islands, wherein the same conditions exist but the birds are absolutely different one from another? I mean…

There has been plenty of conjecture for ideological reasons, but there has been a case of macro-evolution demonstrated.

People have been trying to train chimps to think beyond what a human baby can do at a some months old, with zero success. A wall is confronted, but not a wall. It’s that the entire premise is mistaken.

There is, of course, micro-evolution, that which happens to any species under wildly different conditions. I grew up in the forests of Minnesota and saw up close what our very abundant Poison Ivy is all about. I lived in the forests of Western North Carolina for years at the Hermitage, and noted how very much the same but at the same time how very different the Poison Ivy is here. And the same for all the kinds of varmints and vegetation. If the specialized conditions are taken away, the differences disappear and both reset.

Take salamanders as an example, you know, the ones which have become blind over the years in their sunless caves. But they had eyes at one time. Put them back in the sun and, I betcha, the eyes will become unveiled once again. Micro-evolution.

Take mankind spreading out to the various continents. Pigmentation, body-size, etc., are all matters of micro-evolution. Compare Vietnamese and those on the South Pacific Islands. The diets are wildly different. Compare lily white Russians in the frozen North, covered up all the time as they are, and Africans in the South out in the sun. Micro-evolution.