Above is most of the campus of the New Hampshire State Prison for men. Note the light colored building on the lower-left just above the baseball field. Father Gordon has been housed on lower-left of the bottom floor of that building for the last 17 years, after having been moved out of many years in much worse conditions.

Below is a view of that building from a perspective 180 degrees around. B-Bravo pod is the one with two levels, where he’s been all this time. He’s now sceduled to move to the part of the building with four levels, which includes 4 pods each with two levels (but not all the way across the building on the central door side): C-Charlie, D-Delta, E-Echo, F-Foxtrot. Father Gordon is scheduled to be moved to C-Charlie pod to the right of the central door (the two bottom levels but nearest to that door).

He’s been in a place with a two man cell, but is now going to a place with 8 man cells, which was always considered punitive. It’s unheard of a long term prisoner who has never had a mark against him to be moved to punitive housing after so many years, especially one who, like Father Gordon, is extremely involved in the life of the whole prison for the better. The little black building at the center bottom is called Checkpoint Charlie after the gate between West Germany and Communist East Germany. Here’s the perspective in 1986 from the Communist side: 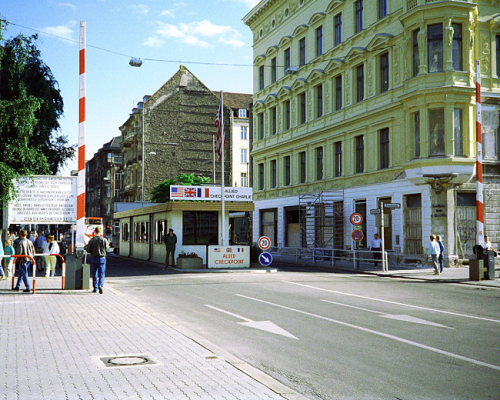 We’re hoping that Father Gordon will eventually be moved to what is called “South”, which, in the photo at the top, is the three level building to the bottom right. Please pray that things work out for him. Here’s a generic picture of what a FOUR man cell is like: 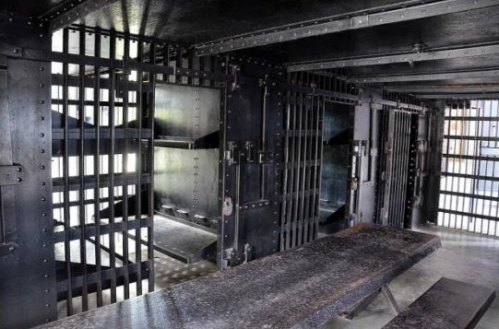 The prison cell where Father Gordon is going was made as a FOUR man cell, but each cell in the pod now houses EIGHT men in one cell. Instead of 48 in the pod there are 96. Go ahead, try to figure out how to make an eight man cell out of a four man cell by using the picture above.

Here’s the deal. Father Gordon rightly insists that he is innocent. This is considered a failure of the prison system, as they want him to say that he is guilty. If he does, they would put him in an offender program and, after six months, release him. He has always been able to do this at will over these past decades, but will not, as he is innocent.

Here’s the irony. It is the offender program which is taking over the two man cells where he now lives. They are forcing him into worse housing. Incredible. Please pray that he have the consolation of walking in the presence of Jesus. Hail Mary…

P.S. Don’t think that a lot more faithful priests won’t soon be sharing the same fate if Hillary wins this election. She is intent on forcing Catholics to pay directly into the abortion super-fund by way of a side-payment along with insurance premiums. The faithful priests won’t do it. And then… imagine 16 in the cell above. It will then become like prisons right around the world:

And those on the outside will still have no clue, no clue at all. Oblivious. Hail Mary…

20 responses to “Father Gordon J MacRae on the move”