This was posted five years ago. A good day to bring this to light once again. Outside of Saint Philomena – the veracity of whose existence as a virgin and martyr of the early Church has recently been sustained by exhaustive scientific evaluations of the evidence – outside of her… there is perhaps no saint more scorned as being no more than a figment of pious imagination than Saint George, who, however, boasts of more archaeological and historical evidence than most any other saint in the history not only of the early Church, but for some lesser known saints, right into our own day. Churches dedicated to Saint George sprang up in their dozens throughout the ancient world immediately after news of his martyrdom on 23 April 303.

Liberal warning: The most obnoxious denial of the existence of Saint George that I’ve come across comes from a super liberal professor of “ecumenism” (which I put in quotes because he had no idea what true ecumenism is). Many of my fellow priests today have had Father XXX as a professor in the various countries, seminaries and universities where he’s mislead people. He had the idea that Saint George couldn’t possibly have existed because of the iconography of him slaying a dragon. His arrogant idea was that we’re very smart today, and people of the past were so very gullible and stupid. He laughed his nervous, cowardly, mocking laugh when I tried to explain a few things about the iconography:

None of this – or the archaeological proofs – made any impression on this super-liberal priest, for the last thing he wanted to hear was faithfulness to the Church unto death. That’s not what his own life was about. Since he couldn’t answer in any reasonable way, he merely laughed his nervous, cowardly, mocking laugh once again. I had to live with that kind of nonsense for… well… pretty much my whole priesthood. Yikes! This kind of thing can occasion an increase in friendship, in view of such a cross, with Christ Jesus and the Saints.

This icon was given to me by Cardinal […]. It’s from the Mount Zion crowd just outside the wall of the Old City of Jerusalem. There is great devotion to Saint George in Palestine until today, with about every third boy being named after Saint George.

George’s father, Gerontius, was well known to the Emperor Diocletian as one of his very best soldiers. When Gerontius’ son George applied to Diocletian to be in the military service of the Emperor, Diocletian quickly made him part of the Imperial Guard and gave him the rank of Tribune. These positions taken together made young George, perhaps in his early twenties, almost as powerful as the Emperor himself. Very few people would have ever had such power, both military and political, and at such a young age. George was an instant phenomenon. Everyone would have known exactly who he was in the entire ancient world. 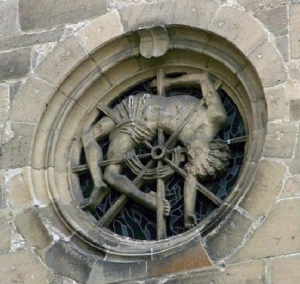 Diocletian was persuaded by the might-makes-right Galerius to have all his soldiers offer sacrifice to the Roman gods. George, with the zeal of the saints, loudly and with great reason proclaimed his worship of Christ Jesus, so that he couldn’t possibly offer sacrifice to any Roman gods. Diocletian, distraught – for he had never intended this – offered George all sorts of bribes, all of which were scorned by our Saint. Diocletian then set out to make an example of him, first attaching him to a wheel of swords and then having him decapitated.

Saint George and Saint Michael the Archangel sometimes meld into one presentation with wings being granted to Saint George on his white horse. That’s O.K. I’m sure they were great friends!

Just to be insistent about this: “Adam” means “Tiller of the Ground.” “Adam” = “George.” Jesus is the New Adam. Jesus is the New George. Yours truly is merely the old George, the old Adam. But Christ has conquered and goes out to conquer still. Thanks be to God our Father that Jesus sets about slaying me so that, dead to myself, I live for Him alone. Yikes! 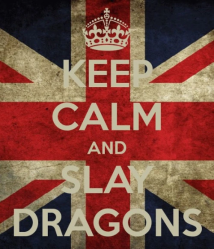 By the way, my parish, which takes in the most outrageously beautiful mountains of the Great Smoky Mountains, boasts, of course, of “The Dragon’s Tail”, which is an extremely dangerous curvy road that every motorcycle enthusiast in North America loves to ride. They all come here! There are hotels just for two-wheelers throughout the area. There are all sort of motorcycle fix-it shops. I invite all cyclers to to make a weekend of this, slaying the dragon by the tail, and stopping in for Mass at 8:30 Sunday morning at Prince of Peace Catholic Church in Robbinsville, NC, or 11:00 Mass Sunday morning at Holy Redeemer Catholic Church in Andrews, N.C. If you’re not afraid of heights or gravel roads, come to Andrews from Robbinsville over Tatham Gap Road. If you’ve never once said “Yikes!” in your life, you will when you ride this one. I say that in solidarity, as most all my broken bones in life (really very many) have come from riding on two wheels with a motor.

It was “Sts George & Philomena are fake!” Now it’s “Jesus and Mary are fake!”

There is no other saint I know of who is more archeologically established than Saint George. We have found the ruins of early centuries church buildings built in his honor at the very time of his death throughout the still anti-Catholic Roman Empire, from throughout Europe to throughout the Near and Middle East and everything in between.

Saint George is trashed because of Renaissance paintings of Saint George on a white horse slaying a dragon so as to save a maiden. “All fiction!” it is shrieked. “Don’t be a martyr, be a man-of-consensus with the world!” is the brow-beating, bullying insistence which advice the soft and self-absorbed readily accept.

But the white horse is that of Jesus in the Apocalypse. In that Apocalypse the dragon is the great Serpent and Satan who is possessing the Caesars of the day. In that Apocalypse the maiden is the Church and the Mother of God. In the Apocalypse those who are killed in witness to Christ Jesus are the victors by their faithfulness right through death. The renaissance paintings are not original to those painters: They were merely representing frescoes in catacombs which depicted all martyrs like Saint George and at the time of Saint George in this fashion. Men who were martyred, women who were martyred, all depicted riding on white horses slaying the dragon, victorious over Satan by being faithful right through death.

Likewise, the virgin martyrs are dismissed as those to whom modern teenagers cannot relate. The first to be cancelled is Saint Philomena. In recent scientific studies, it is established absolutely that her catacomb stone reads: “Pax tecum Philomena” with no other possibility, and that the small glass vase found in that place contains the blood of a girl carbon-dated to the time of Philomena. Yep.

A priest working in the Holy See at the time I attended the presentations of these scientific studies actually hunted me down in Rome and insisted that it cannot be that I, a student at the Pontifical Biblical Institute, could promote the viability of placing Saint Philomena in the liturgical calendar once again. He was frantic, as if possessed. Yep.

The problem is both virginity and martyrdom, and martyrdom because of the virginity because of giving oneself over to Christ Jesus, to be “hidden with Christ in God” as Saint Paul says. We can’t have that today, shriek the inverted.

But that’s all years ago. Now what we have presented to us is that Jesus and His dear mother are irrelevant in every way. We must ignore them; we must obey the fallen world, we must worship Satan, Pachamama. Yep.

I will worship our Heavenly Father through, with, and in Jesus by the Holy Ghost and I will thank our dearest Immaculate Virgin Mary for interceding even for me as advocate, mediatrix, co-redemptrix. Thank you Jesus. Thank you Mary.

Re-posted today, the Feast of Saint George, as the pictures are great!

Well now. That’s scary. I did a massive search for the fellow I mention in this homily and I couldn’t find one single trace of him anywhere.

Anyway, this is how Saint George was put to death by the Roman Empire: 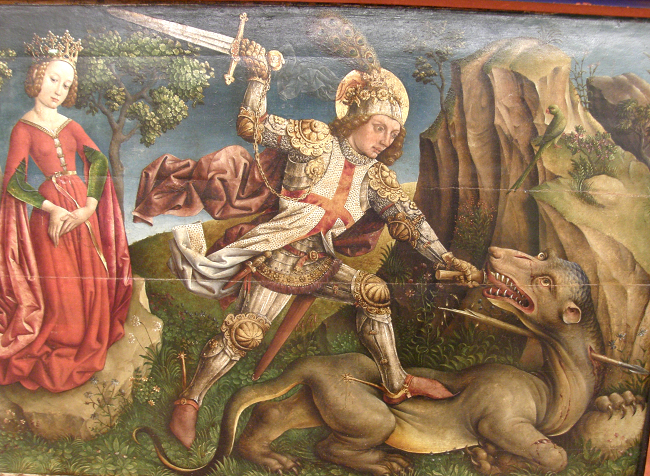 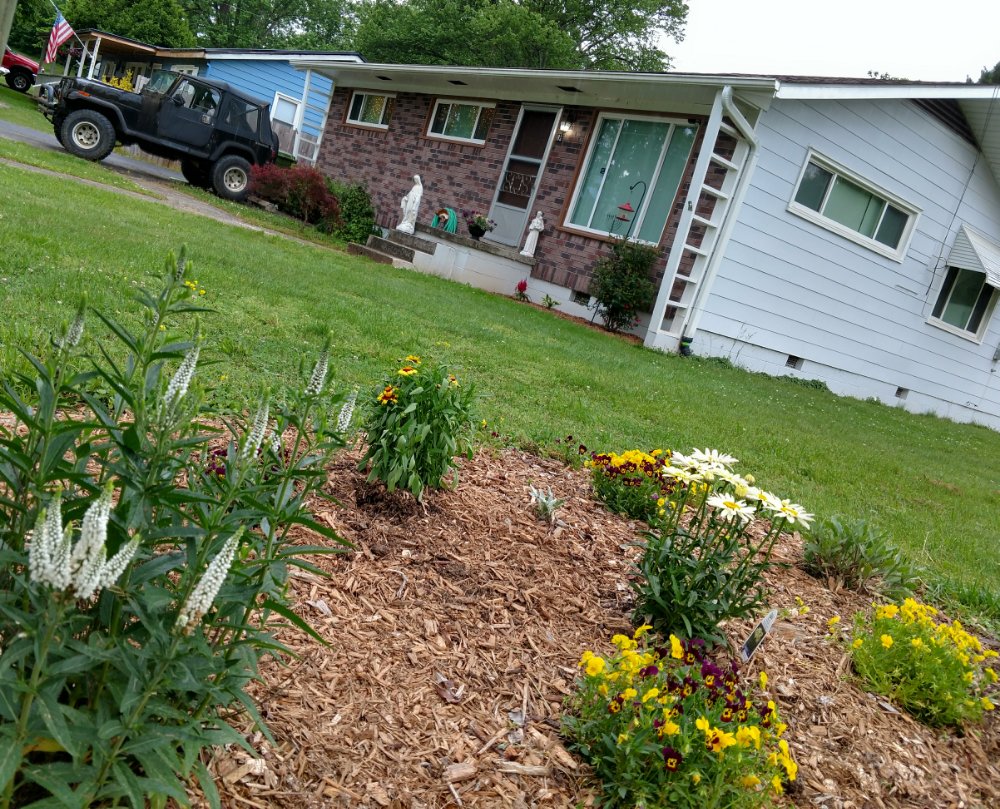 Can you see the challenge to Saint George in the picture above? It has to do with the breath of dragons:

Let’s get a bit closer, but don’t get burned:

This fiery color of fuschia (pronounced with the Bavarian soft “sh” sound[!]) is of a flower called “Dragon’s Breath” taking a hint from the original Greek name Κηλεος (burning). Sorry about the blurriness; digital cameras just can’t capture anything with red except, oddly, the pupils of eyes.

Parishioners from Florida (half the year) and here (half the year) have finally returned for the cooler mountain temps, and went to buy flowers the other day. They saw this Dragon’s Breath flower and thought of me, you know, Saint George who slew the Dragon and all that. I guess this is an appropriate parish for me to be in, what with the world-famous “Dragon’s Tail”, quite the ride for motorcycles and mini-cars. [Riders beware. I hear the lead-up road speed limit just dropped from 55 to 40.] If you look at the very top picture, you’ll see it planted directly below the Saint Anthony of Padua statue by the front door of the rectory.

Going back up to the Icon, take a look at Holy Mother Church (the woman) and the Lamb of God. Do they look scared? Nope. Is George really saving Her or is She calmly praying for George, you know, so that he is successful in bearing witness to Jesus even as a Roman Soldier? George is being given the opportunity to be Saint George. He’s thankful for the support and encouragement of the whole court of heaven. It’s the one Body of Christ at work. His being a good Catholic was a capital crime for which the Dragon, the possessed-by-Satan-Roman-Emperor, would have George put to death, the very manner by which, persevering to the end, George would become a martyr, a witness, laying down his life for his friends, for Holy Mother Church, Saint George.

Giving a flower to the Immaculate Conception isn’t so much about us doing something; it’s about the support and encouragement of Holy Mother Church for us to follow through with an occasion to do just that. We’re one big family. We rejoice together, even in adverse circumstances.

BTW: As you see from the very top picture, no flags are out as there are torrential rains predicted, but I also need to work on the flags. The 3×5 American Flag is in tatters and needs replacing. I’m thinking, though, of putting up a 3×5 blue-line flag. 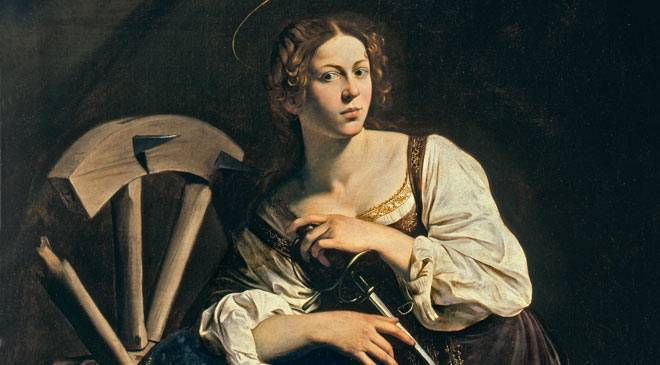 As with Saint George and Saint Michael, there are those who doubt the existence of other saints such as the Great Saint Catherine of Alexandria. What’s to be done?

Seeing my post on Saint George the Dragon Slayer on this, his feast day, a priest wrote in just now about what he had done:

As I wrote to a friend […] who denied the existence of St Catherine of Alexandria (mutatis mutandis):

“When you stand before the judgment seat of God and the scales of justice are perfectly balanced between your good deeds and your bad, St Catherine will come, having plucked but one tiny feather from a wing of St. Michael the Archangel, and place it among your bad deeds and you shall be damned for evermore in the flames of Hell.”

Wow. I love that. And then, from Jesus:

And I would add this amidst confusion regarding the confusion of Amoris laetitia:
So, there we have it. Jesus will come to judge the living and the dead and the world by fire. Amen.